Upon their arrival, Moon Hee Jun congratulated the members on receiving awards at the 28th Seoul Music Awards and the 33rd Golden Disc Awards. Sowon responded, “It always feels good to receive an award. I’m very proud that we are able to receive such great awards thanks to our fans.”

The members also took time to make a special request to their agency, Source Music. They complained that the agency has never willingly taken them out to dine together. Sowon said, “Even when we bring home awards from [award shows such as] the Seoul Music Awards and the Golden Disc Awards, they never take us out for a celebratory dinner.” 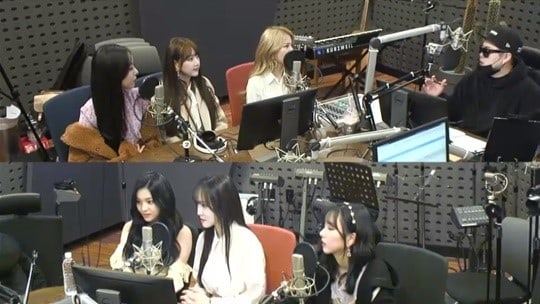 Eunha added, “Our company has never willingly taken us out. It’s to the point we have to go to a barbecue restaurant by ourselves.” SinB continued, “According to the owner of a barbecue restaurant in front of our agency, our representative is a regular customer. I was very upset [to hear that].”

At the end, Yuju sent a video to Source Music’s CEO and made a special request. Yuju said, “Doesn’t your name have the character ‘So’ (which also sounds like the Korean word for cow) in it? But you have never bought us beef before. Just like your name, it would be great if you buy us beef at least once. We also like pork.”

Eunha concluded, “If we receive a music show win with ‘Sunrise,’ I hope our CEO buys us a celebratory meal with his own credit card.”

Check out the music video for GFRIEND’s “Sunrise” here!