On the January 18 broadcast of KBS 2TV’s “Yoo Hee Yeol’s Sketchbook,” rapper Mommy Son appeared as a guest and revealed what he exchanged for permission to use his stage name.

On why he put the pink mask on in the first place, he said, “Mommy Son was an artist at his peak, but he was feeling his limits. He needed some sort of artistic tool, and it was a pink mask. When he put it on, it looked like the pink rubber gloves [by the company Mommy Son], so he called himself Mommy Son.”

He explained that to use the name, which is trademarked, he needed permission from the company to do so, and they readily agreed. “I wondered what I could do for them in exchange, and I decided to model for their brand for free.”

Mommy Son’s true identity remains unconfirmed in an official capacity, although the general opinion remains is that he is Mad Clown, despite repeated denials.

Mommy Son said about Mad Clown, who also appeared on the same episode of “Sketchbook,” “Our rooms backstage were right next to each other, but I didn’t get to see him.” 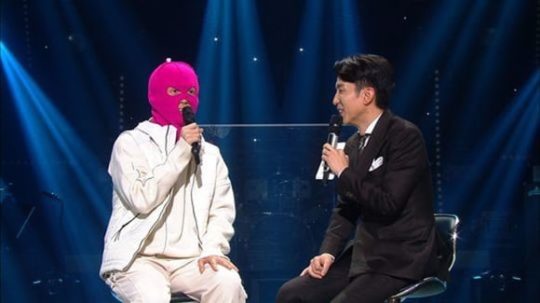 Mad Clown
Mommy Son
How does this article make you feel?