Shin Eun Kyung and Kim Myung Soo battle it out with their fierce aura in new stills for “The Last Empress.”

According to Nielsen Korea, the January 17 broadcast of SBS’s “The Last Empress,” reached an impressive 16.1 percent in viewership ratings in the Seoul metropolitan area and 15.2 percent nationwide.

Shin Eun Kyung, who has taken on the role of Emperor Lee Hyuk’s (played by Shin Sung Rok) overbearing and manipulative mother as the Empress Dowager, and Kim Myung Soo, who has taken on the role of Byun Baek Ho who was once the former head of the imperial guards and the father of Queen So Hyun (Shin Go Eun), have showcased their strong acting skills with the release of new stills.

Last episode, viewers felt the tension increase when Byun Baek Ho appeared in the midst of Empress Oh Sunny (Jang Nara) making a counterattack on Emperor Lee Hyuk and the Empress Dowager. After kicking Oh Sunny out, the Empress Dowager made a book club for “The Last Mrs. Spencer” and invited Oh Hel Ro (Stephanie Lee) and the editor in chief of the publishing company to expose Oh Hel Ro’s lies. However, Oh Sunny made Emperor Lee Hyuk read a part of the book, and Lee Hyuk was shocked to discover that the details of Queen So Hyun’s death were written in the novel. At the end, Byun Baek Ho appeared, roaring, “Is this how my daughter died? Who killed Queen So Hyun?” 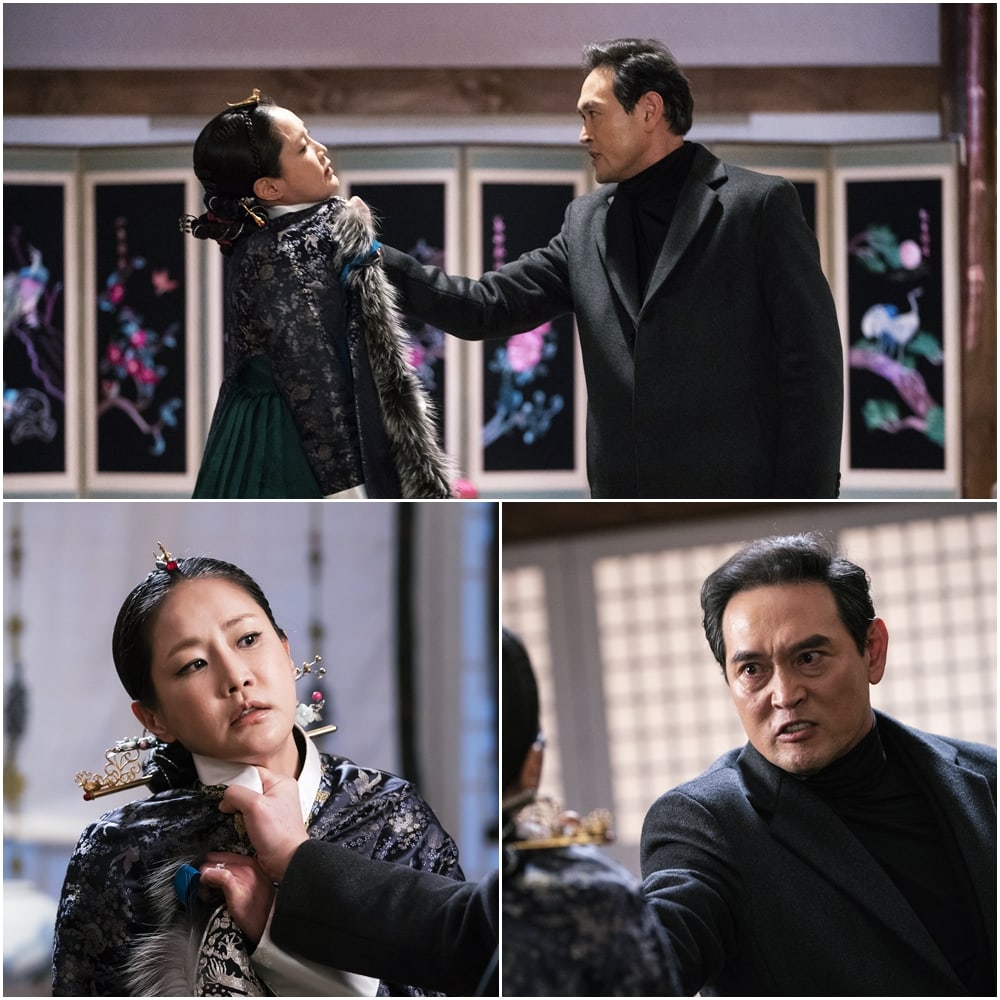 In the stills, Shin Eun Kyung and Kim Myung Soo look furious with each other as their anger explodes. The image in which Kim Myung Soo is grabbing Shin Eun Kyung by her collar has grabbed the attention of the viewers. Kim Myung Soo is staring at Shin Eun Kyung with a death glare, unleashing his wrath. Viewers are curious to find out what caused Byun Baek Ho’s suppressed feelings to explode at the powerful and untouchable Empress Dowager who feels no remorse.

After a simple rehearsal, the two actors went straight into filming. Even before filming began, Shin Eun Kyung and Kim Myung Soo immersed themselves into their roles perfectly, taking over the filming set with their experienced acting skills. Kim Myung Soo perfectly portrayed Byun Baek Ho’s desperation and sadness, while Shin Eun Kyung used her expressions to skillfully act out the Empress Dowager who kept her cold gaze despite her surprise.

The production staff said, “This is an inevitable scene in which Byun Baek Hee, who hasn’t made the death of his daughter public, can no longer hold in his anger.” They added, “Please look forward to what will result from Byun Baek Ho, who has led the opposition to the Imperial family from the shadows, grabbing the Empress Dowager by her collar and what the atrocious Empress Dowager will plot again in the future.”

“The Last Empress” airs every Wednesday and Thursday at 10 p.m. KST. Catch up with the latest episode below!

Shin Eun Kyung
The Last Empress
Kim Myung Soo (1966)
How does this article make you feel?