On the latest episode of “Running Man,” the cast members had a blast teasing Jun So Min about guest Gong Myung!

Gong Myung made a special guest appearance on the January 20 broadcast of the variety show, along with four of his co-stars from his upcoming film “Extreme Job” (literal title). At the beginning of the episode, Yoo Jae Suk pointed out that it was the actor’s first time on “Running Man” and asked him which cast member he had been most excited to see.

Suddenly, Jun So Min stepped forward and said, “But I’ve never seen him before either.” The bewildered cast asked, “Who?” and Jun So Min shyly replied, “Gong Myung. He forgot about me.”

The “Running Man” cast jumped at the chance to tease her, joking that she was taking over Lee Kwang Soo‘s role as the cast member who is always falling in love. Lee Kwang Soo commented with a laugh, “Whenever Jun So Min starts [tucking her hair behind her ears], that’s how you know she’s getting ready [to begin flirting].” Yoo Jae Suk chimed in, “She does it so much that she has to apply ointment [behind her ears].” 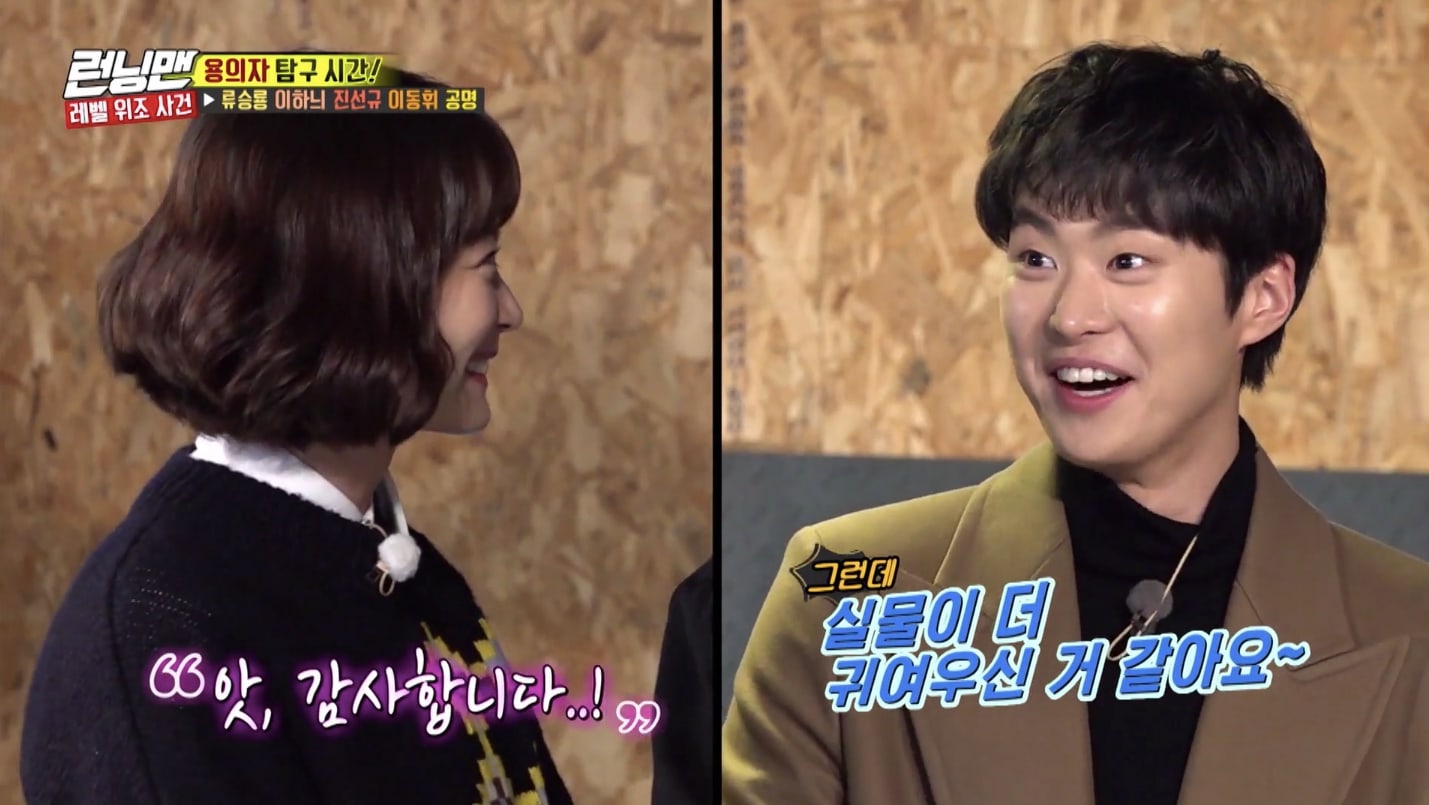 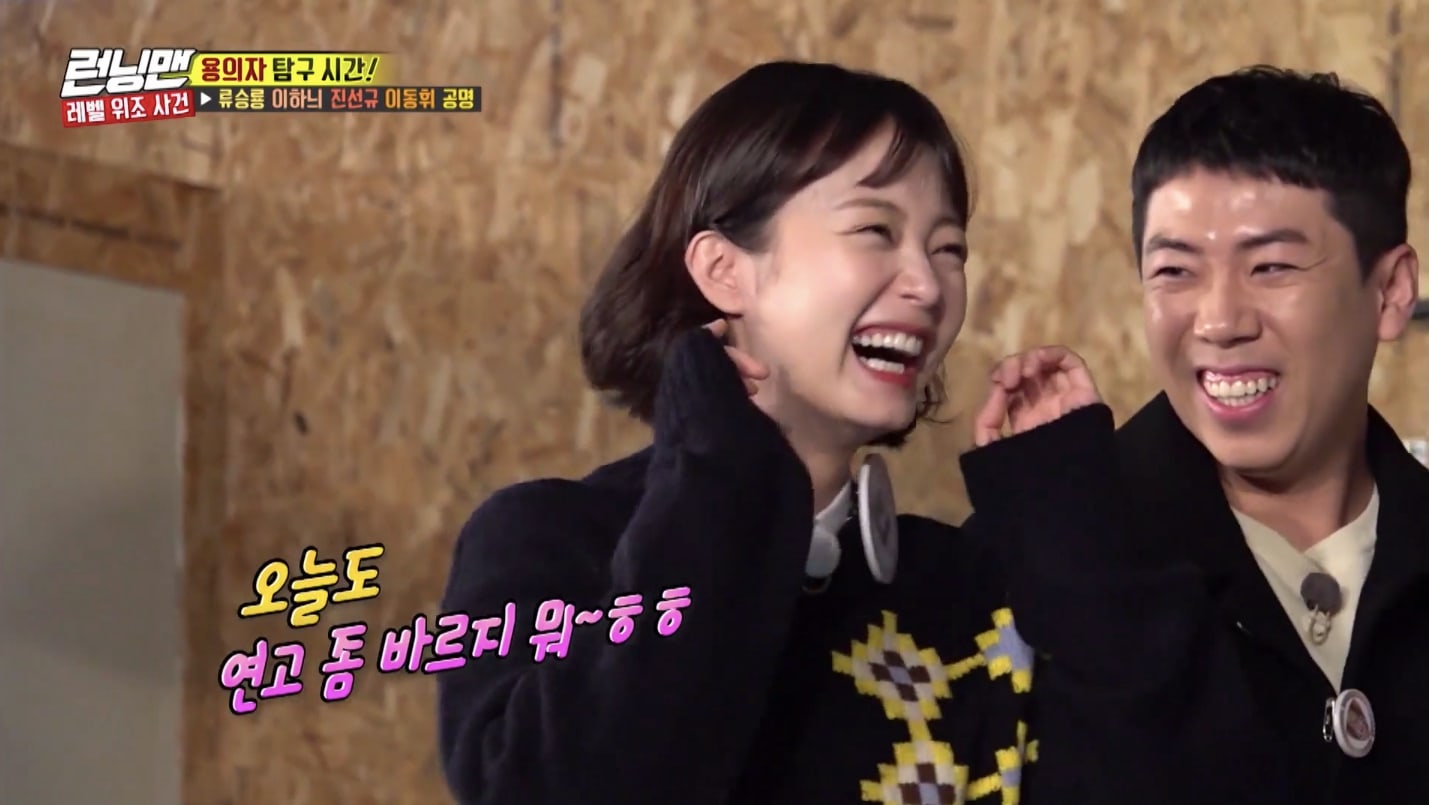 Later on in the show, the cast members and guests played a game where they had to answer “yes” or “no” to a question of opinion by holding up one of two paddles.

After everyone had decided on their answers to the first question, Song Ji Hyo amusedly pointed out, “[Jun] So Min originally picked ‘yes,’ but she switched her answer because Gong Myung chose ‘no.'”

Yoo Jae Suk jokingly complained, “What is this, ‘Studio of Love’ [a famous Korean dating show]?” As Gong Myung hid his face in embarrassment, Jun So Min confirmed with a laugh, “My opinion is the same as Gong Myung’s.” 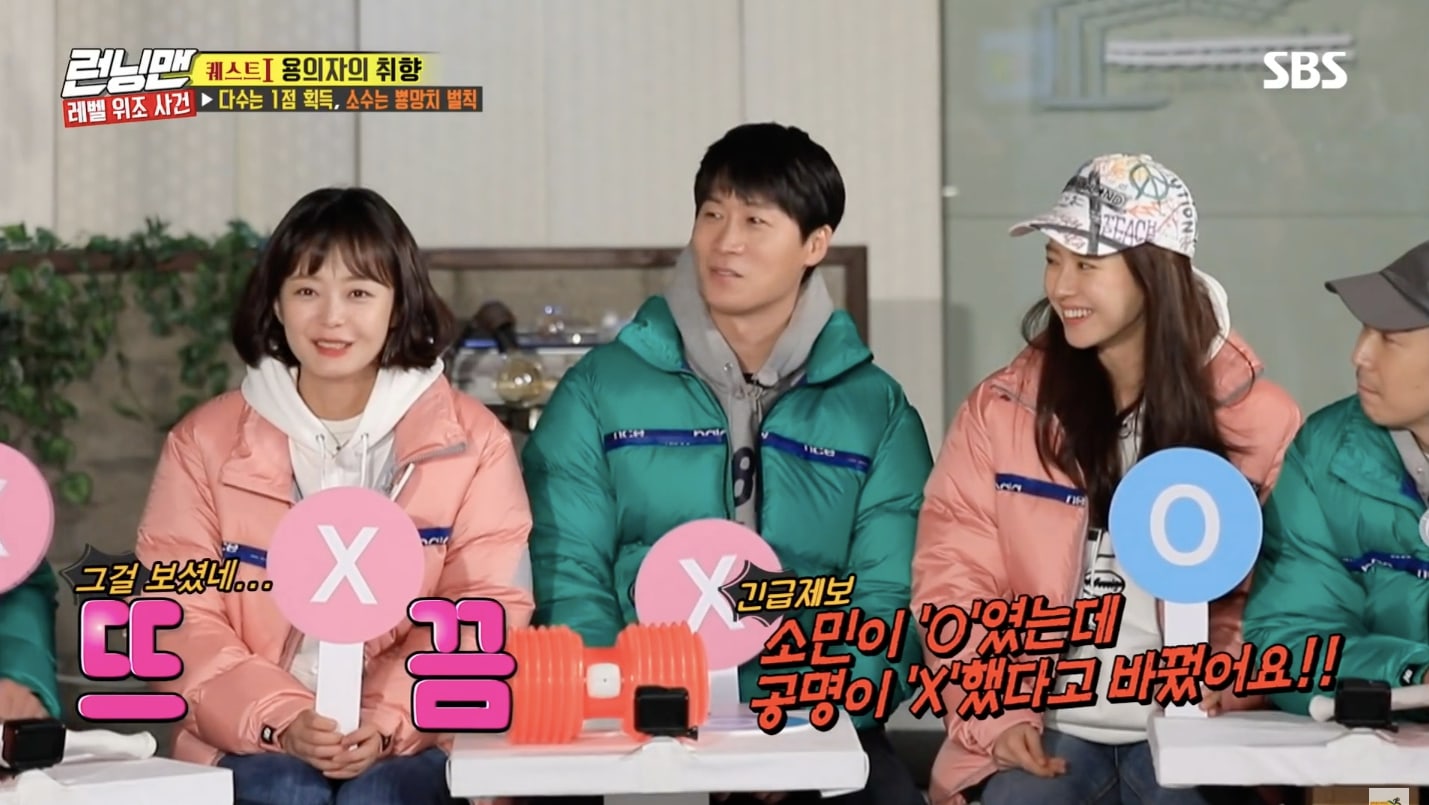 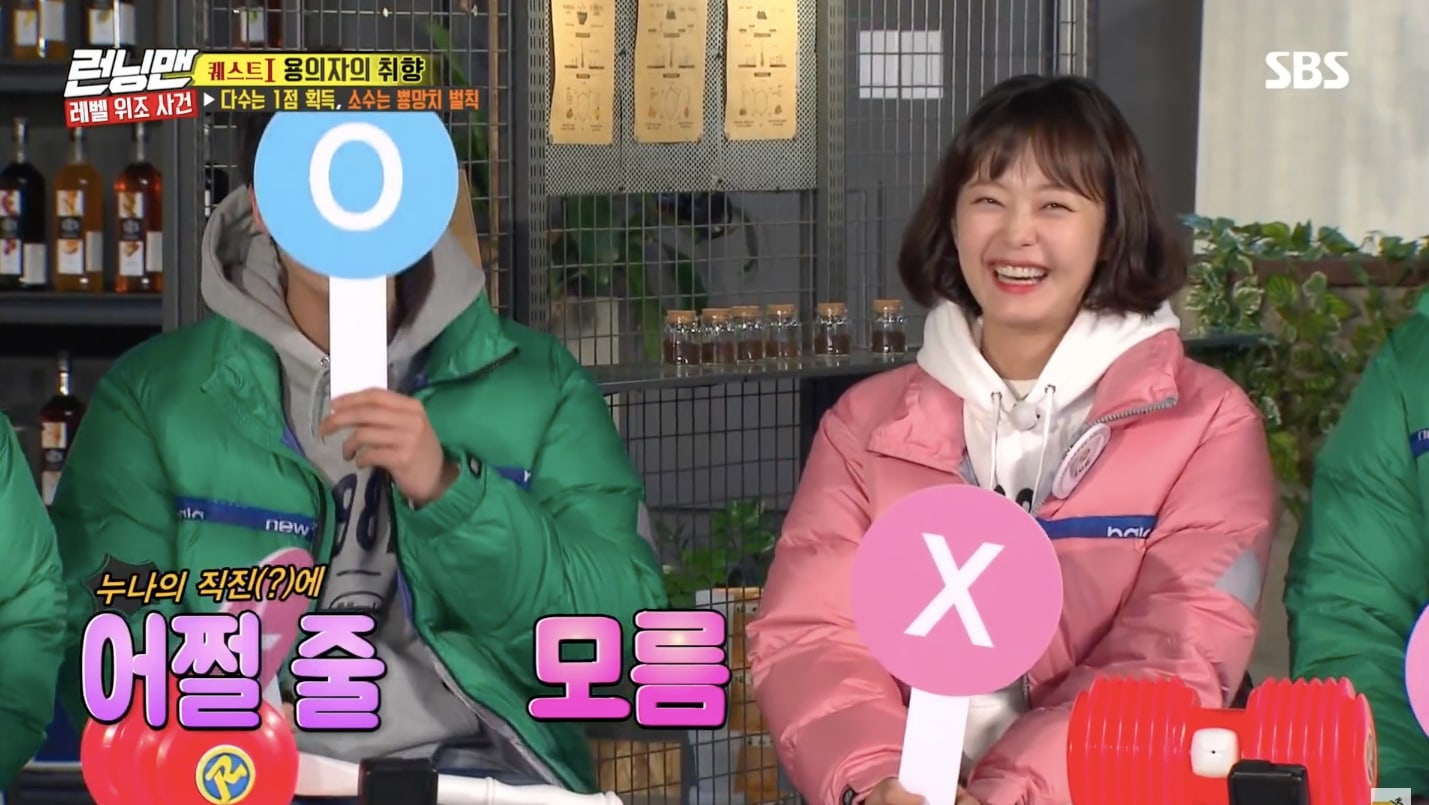 However, things didn’t end there. During the next mission, Jun So Min and Gong Myung ended up facing off as competitors in a game that required fast reflexes. When they were about to begin the game, Gong Myung took a moment to catch his breath, remarking offhandedly, “I’m nervous. Why am I so nervous?”

Jun So Min took the opportunity to flirtily reply with a meaningful gaze, “Why? Why are you nervous?”

Yoo Jae Suk jumped to his feet and exclaimed, “What is this, a date?” before teasingly imitating Jun So Min’s flirty tone. Yang Se Chan chimed in, “What do you think you’re doing?” and Lee Kwang Soo added, “He’s nervous because he’s about to play rock-paper-scissors!” 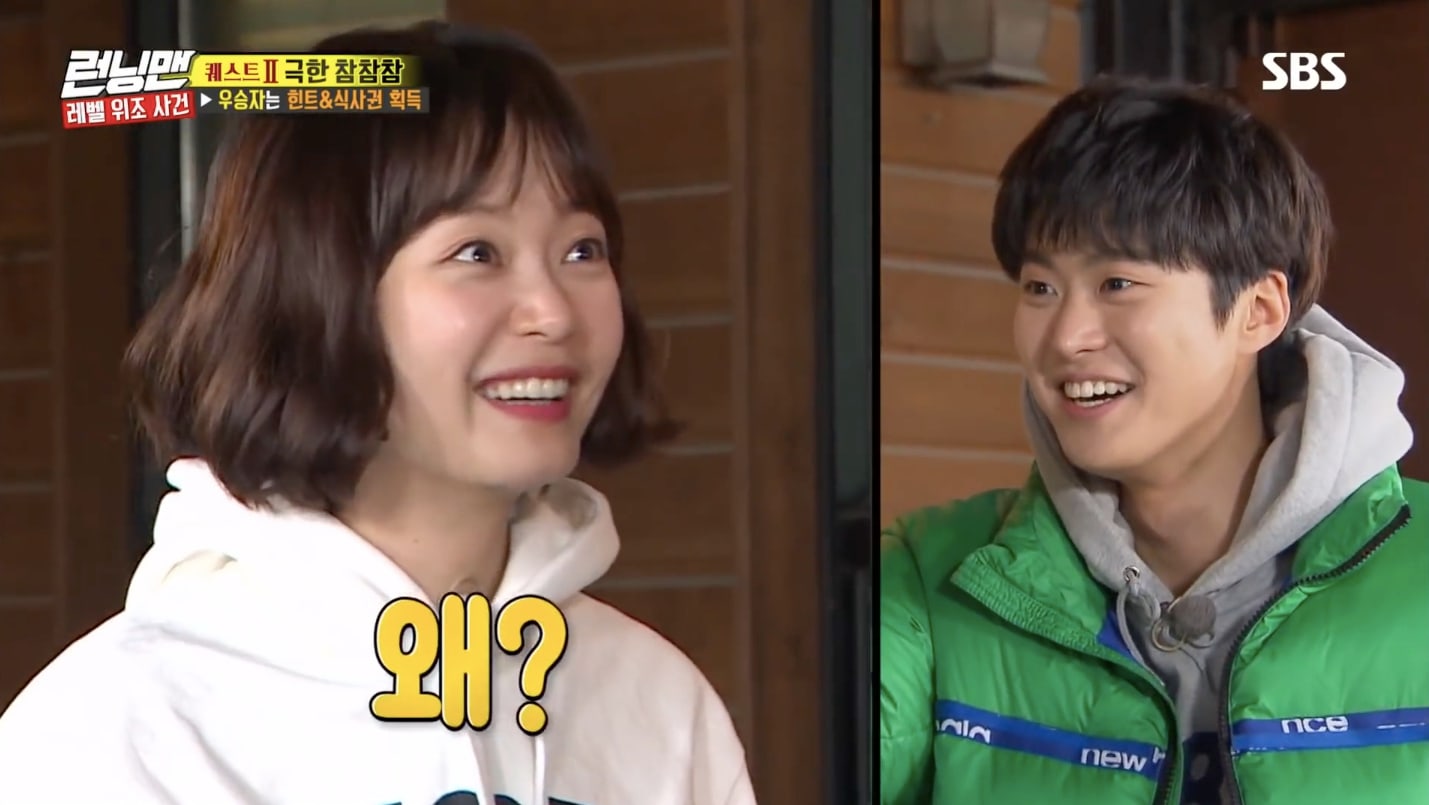 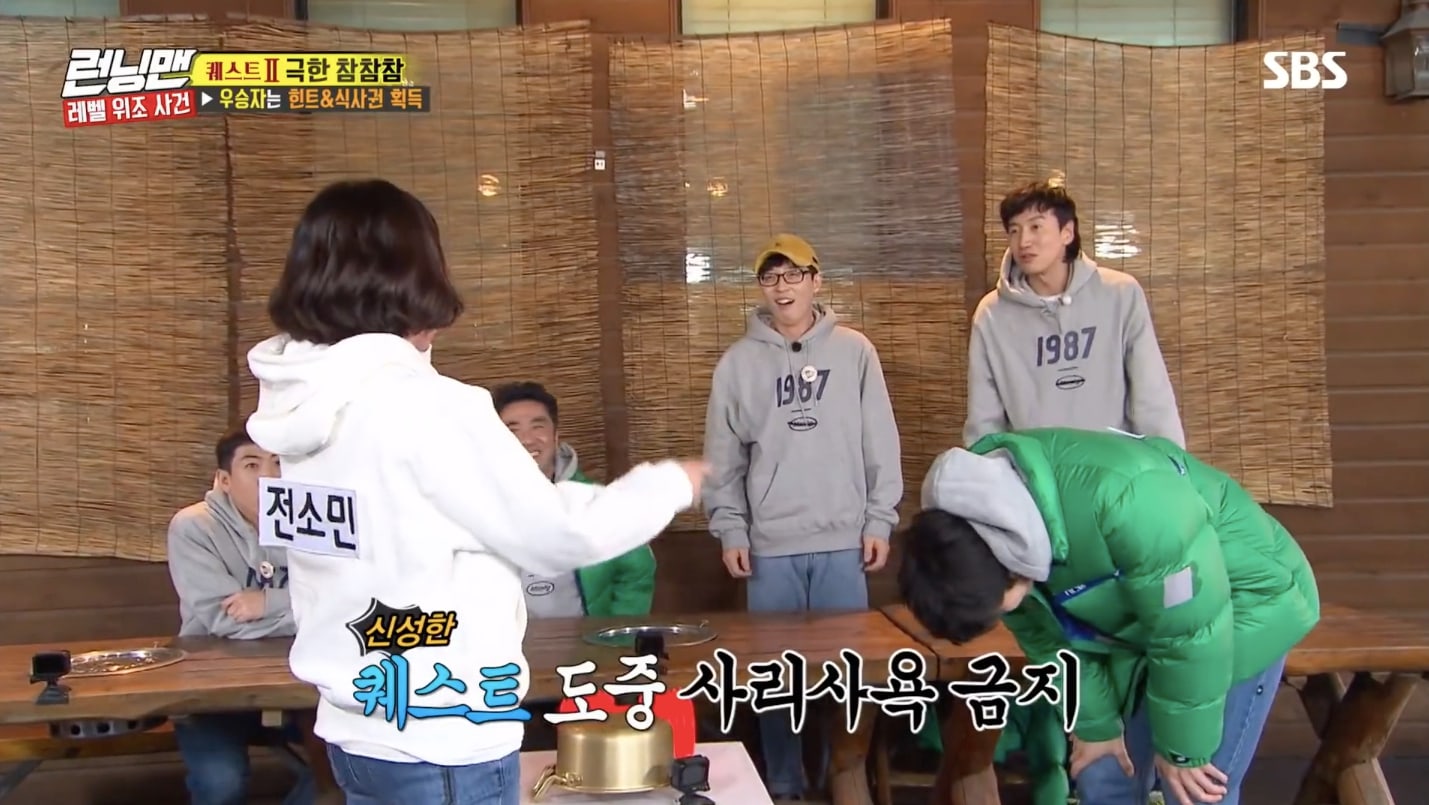 Later on, when Gong Myung made a mistake during the game, the cast members playfully accused him of going easy on Jun So Min. But when he ultimately ended up winning the round by bopping her on the head, they laughed, “I guess he wasn’t going easy on her after all.”

Jun So Min jokingly complained, “You’re really not going to go easy on me?” and Gong Myung rushed to offer her a consolatory hug. Jun So Min then cracked up the cast by handing him the toy hammer and joking, “Then hit me one more time and embrace me.” 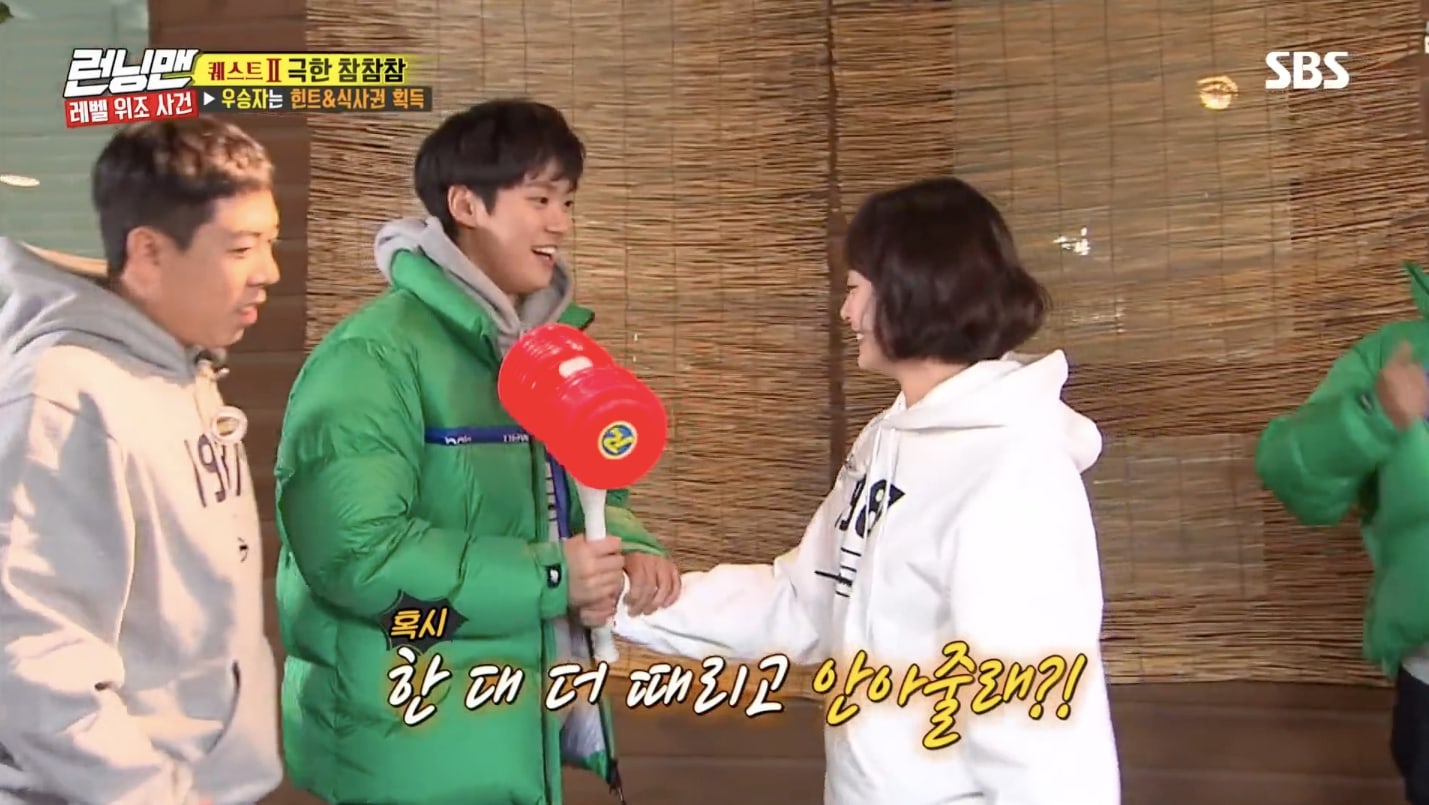 Gong Myung
jun so min
Running Man
How does this article make you feel?