Hong Suk Chun On Coming Out: “I Needed To Live Honestly If I Wanted To Live Happily.”

Hong Suk Chun talked about making the decision to come out even though he knew his career would be affected.

On the January 20 broadcast of SBS’s “My Ugly Duckling,” Park Soo Hong visited the home of Hong Suk Chun, his friend of 24 years. 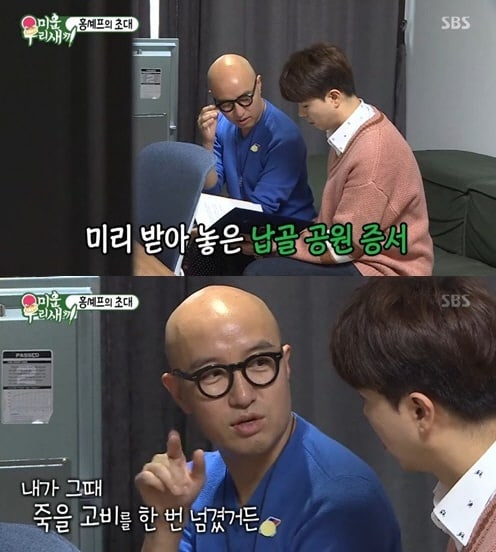 After the house tour, the two friends headed to the kitchen where Hong Suk Chun began making a crab dish.

Hong Suk Chun’s mom said to Park Soo Hong, “[Hong Suk Chun] is the youngest and has three older sisters. My parents-in-law worried a lot because I only gave birth to daughters. At the time, you were treated well after giving birth to your first son. They weren’t happy that I gave birth to three daughters in a row.” She continued, “After I gave birth to him, they were so happy, and I was treated well. I had a really good conception dream when I had him. I knew at the time that it was an extraordinary dream. Rice plants were plentiful and grew really well and made up a wall around our house. I still remember as if I had the dream yesterday.”

When Park Soo Hong asked if she was happy when Hong Suk Chun moved to Seoul to become a celebrity, she answered, “I was happy. I was happy then, but I was upset when he came out when he was 30 years old. I was so disappointed. I had big expectations and I never thought he’d do that even in my wildest dreams.”

“I [came out] when I was really successful,” commented Hong Suk Chun. His mom wondered why he didn’t just keep the secret, since no one would know, and Hong Suk Chun answered, “I was so frustrated about living life while hiding it.”

At the studio, Shin Dong Yup commented, “That’s true, because he would have to continue lying.” Tony Ahn’s mom added, “Right. If you lie once, then you have to lie again.” 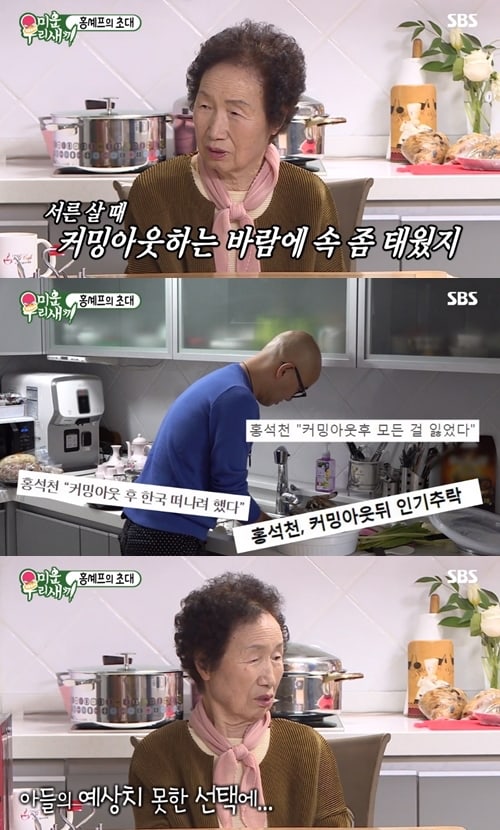 Shin Dong Yup asked the moms in the studio how they would respond, and Park Soo Hong’s mom replied, “You have to accept your child.”

Special guest Shin Ae Ra commented, “How painful must it have been for him to hide and lie about it, and not be able to be sincere with people he met. It must have been so painful for him to do it even though he knew how much it would hurt his mom. It must’ve taken a great deal of courage. My heart hurts thinking about how much pain he must’ve been in on his own.”

Hong Suk Chun debuted in 1995 and was the first-ever Korean celebrity to come out when he did so in 2000. He briefly halted promotions after coming out and has since returned, leading a successful career as a celebrity and entrepreneur.

“My Ugly Duckling” airs on Sundays at 9:05 p.m. KST. Check out the latest episode below!

Hong Suk Chun
Park Soo Hong
My Ugly Duckling
How does this article make you feel?