The third season of “High School Rapper” has revealed its mentor lineup and the date of its first broadcast! 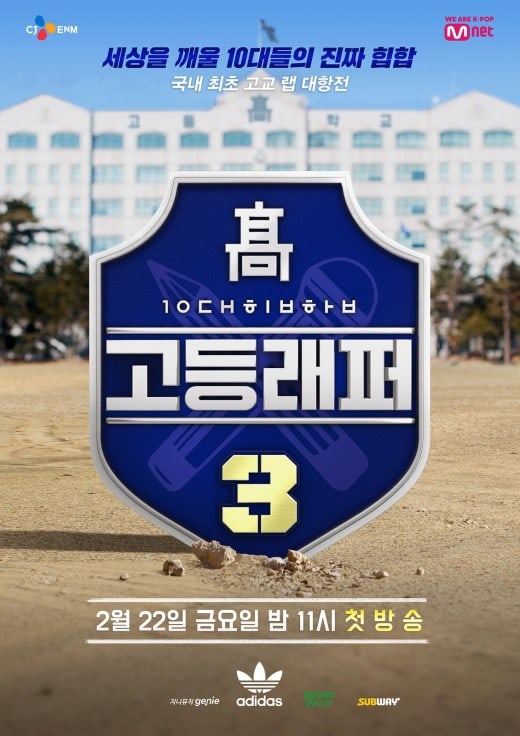 The “High School Rapper” series has been a success as it was not only a survival show, but also a place where teenagers could express their thoughts to the public through rap. Some of the most successful rappers who were contestants on the show include HAON, Lee Rohan, Yoon Jinyoung, and Jo Wonwoo.

The first mentor team of “High School Rapper 3” includes The Quiett, who commented, “I will bring up the level of ‘High School Rapper’,” and Code Kunst, who revealed that he has 500 rap beats under his belt that he wrote just for the show.

The second team is producer duo GroovyRoom. GroovyRoom was the mentor of HAON, the winner of “High School Rapper 2,” and the producer behind hit songs “Boong-Boong” and “Bar Code.” With confidence, they stated, “This season’s winner will be from our team again.”

Giriboy will be a mentor on the series for the third time. He was the mentor of Young B (also known by his real name Yang Hong Won), who won the first season of “High School Rapper.” Giriboy will be joined by Kid Milli who will be mentoring on the show for the first time. Giriboy announced, “I will bring out a winner with my unique music and abundant survival know-how,” while Kid Milli said, “I will approach the contestants with an understanding heart and bring out the teenagers’ potential 200% while aiming for first place.”

The last mentor team is composed of Hangzoo and Boi.B, who are appearing on the series as mentors for the second time. They commented, “We will brush off our runner-up position from last season and take first place this time.”

Which team are you looking forward to seeing?