Sandara Park and EXID’s Hyelin shared some insights into how idols flirt at events like “Idol Star Athletics Championships” and year-end awards ceremonies.

Hyelin guested on the January 22 episode of MBC every1’s “Video Star.” During the episode, she shared some of the behind-the-scenes flirting she’s seen between idols at the “Idol Star Athletics Championships.”

When Sandara Park first brought up the topic, she commented disappointedly, “I’ve never been to the ‘Idol Star Athletics Championships,’ so I’m really curious.” Hyelin shared, “The place I see it the most is at the opening and closing ceremonies. You can see it in the way they exchange glances.”

Hyelin also demonstrated another way of flirting she’s seen, showing how when some idols would walk past another, they would secretively yet naturally graze their hand against another idol’s. When asked if she saw this often, she answered that she had seen quite a few pairs of idols do this. 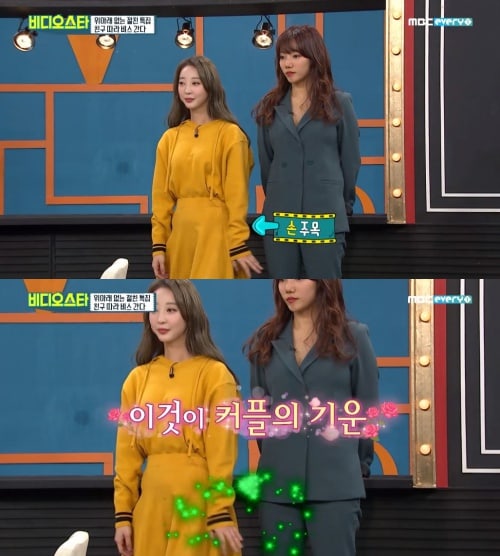 Sandara Park also brought up her own experience of romantic interactions between idols. She said, “Though I haven’t been to the ‘Idol Star Athletics Championships,’ it seems like it’s pretty similar. At end-of-year awards ceremonies, when everyone’s together, we did gaze and look at each other a lot.”

Park Na Rae asked her if she had personally gazed at someone, and Sandara Park shared, “How could you not? It’s Christmas time, but you can’t go on dates, and you’re at the same event. So you just walk by them, say hello, and gaze at them as they walk by.”

Park Na Rae pointed out that that meant that she had dated another fellow idol, to which Sandara Park joked, “Well, it’s something that happened so long ago like the Korean War,” making everyone laugh.

EXID
Sandara Park
Hyelin
Video Star
How does this article make you feel?