During an interview ahead of the release of “Along with the Gods: The Last 49 Days” in 2018, Joo Ji Hoon once said, “I want to be an industry senior like Jung Woo Sung.” He explained that he saw Jung Woo Sung as a role model because he not only takes care of his juniors, but he also makes sure each and every staff member is doing well as well.

Jung Woo Sung was asked how he felt about Joo Ji Hoon’s statement in a recent interview for his new film “Witness.” He replied, “I’ve thought for a long time that I need to be a good co-worker on set, not just for my co-stars but for the production staff as well. I think it’s important to greet everyone first, and acknowledge and thank them for the hard work they put in. It doesn’t have to be anything special or big. It helps foster a connection with people so that even when things get tough, we can pull through with a sense of camaraderie.”

He added, “I think Joo Ji Hoon picked up on that mindset I try to put into action. And since he and I are both actors and I’ve been working longer than he has, he described me a senior he wants to emulate.” 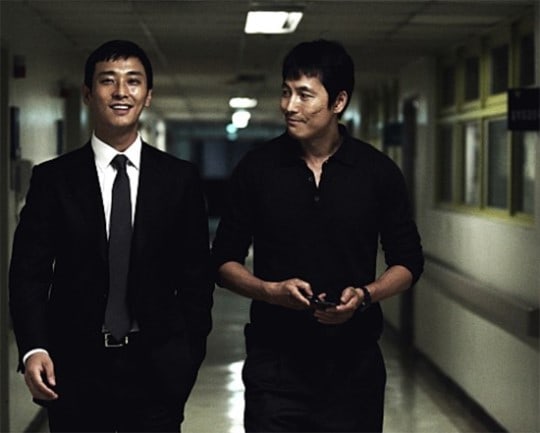 Joo Ji Hoon
Jung Woo Sung
How does this article make you feel?