ASTRO Describes Each Other’s Strengths, A Time They Wanted To Escape From Everyday Life, And More

ASTRO talked about their latest comeback and each other in a fun interview.

On January 23, the group’s photos and interview were released from the latest issue of Marie Claire. ASTRO recently came back with their first studio album “All Light” and title track “All Night.”

About promoting together for four years, JinJin said, “It’s amazing. Since we’re always together, I feel like our interests and thoughts are slowly becoming similar. There was a time when I felt like singing a song and sang just one verse, and another member sang the same verse at the same time as if we planned on it. I don’t know why, but we say, ‘Wow! What’s this?’ and get surprised.”

Cha Eun Woo suggested, “That’s because we listen to similar things” and Moonbin added, “There are times when a member suddenly sings a song that I thought about singing.”

He continued, “It has feelings of Eastern Europe. It has the vintage feelings of Prague and also reminds me of the classical music of Vienna. This album teaser clip shows that as well.” 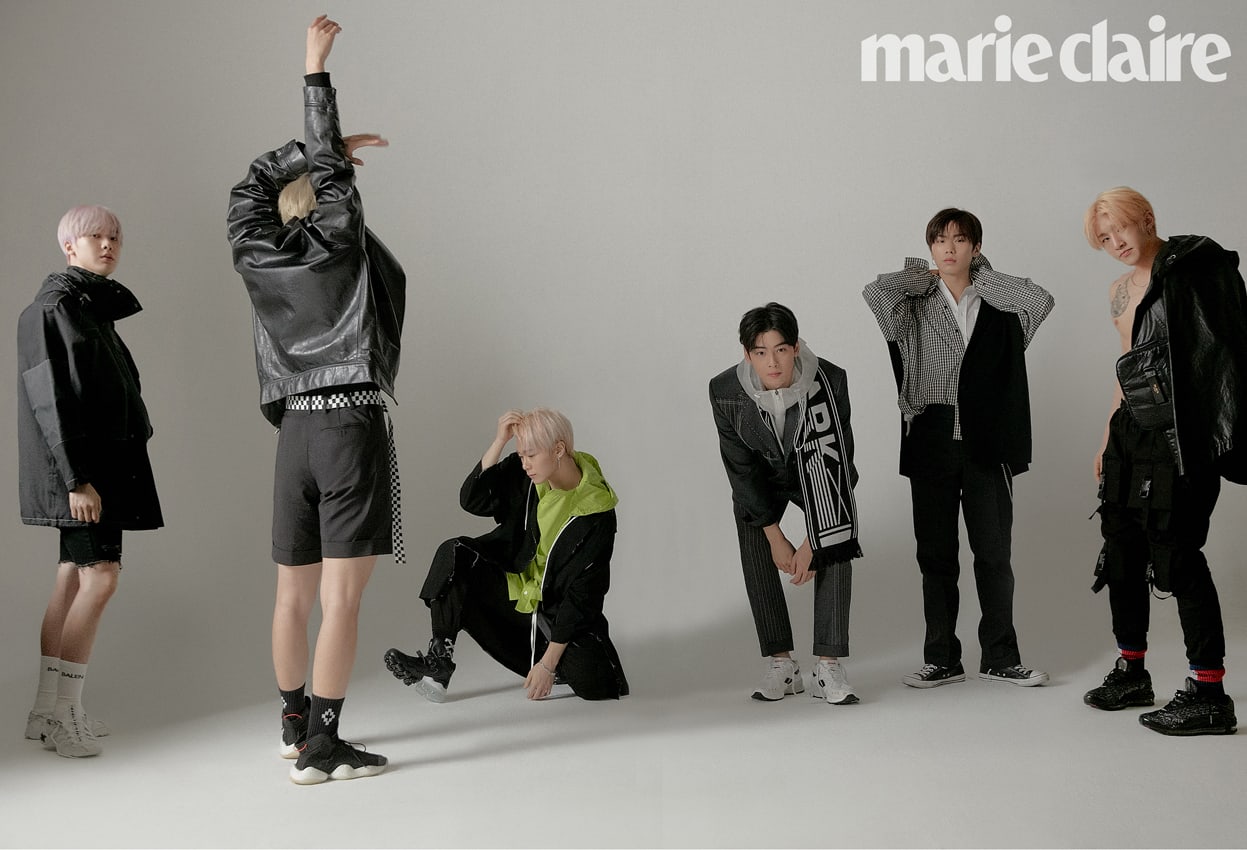 Each member then discussed their favorite song out of the 10 included in the group’s first studio album “All Light.” “Can I choose two songs?” asked Cha Eun Woo. “The first is a song called ‘Love Wheel’ and it feels like the creation of a bridge just for ASTRO and AROHA [ASTRO’s official fandom]. I think it’s a song that best conveys this album’s concept about going towards somewhere bright. The other one is ‘Bloom’ which was made by the members.”

Moonbin replied, “I also have two songs. ‘Role Play’ which only ASTRO’s vocalists participated in and shows a new appearance, and ‘1 in A Million’ which has a refreshing feeling.”

“The title track ‘All Night,'” answered JinJin. “After listening to the guide for the first time, I couldn’t stop thinking about the melody. It was a song I really hoped we would sing. The key is high overall, but the members did a good job.”

MJ said, “This album has many sexy sides, but those who miss ASTRO’s refreshing appearance should listen to ‘1 in A Million.'” Rocky responded, “‘Bloom’ is a majestic ballad that begins with string instruments,” and Sanha added, “I like ‘Moonwalk’ because it has a stronger feel.” 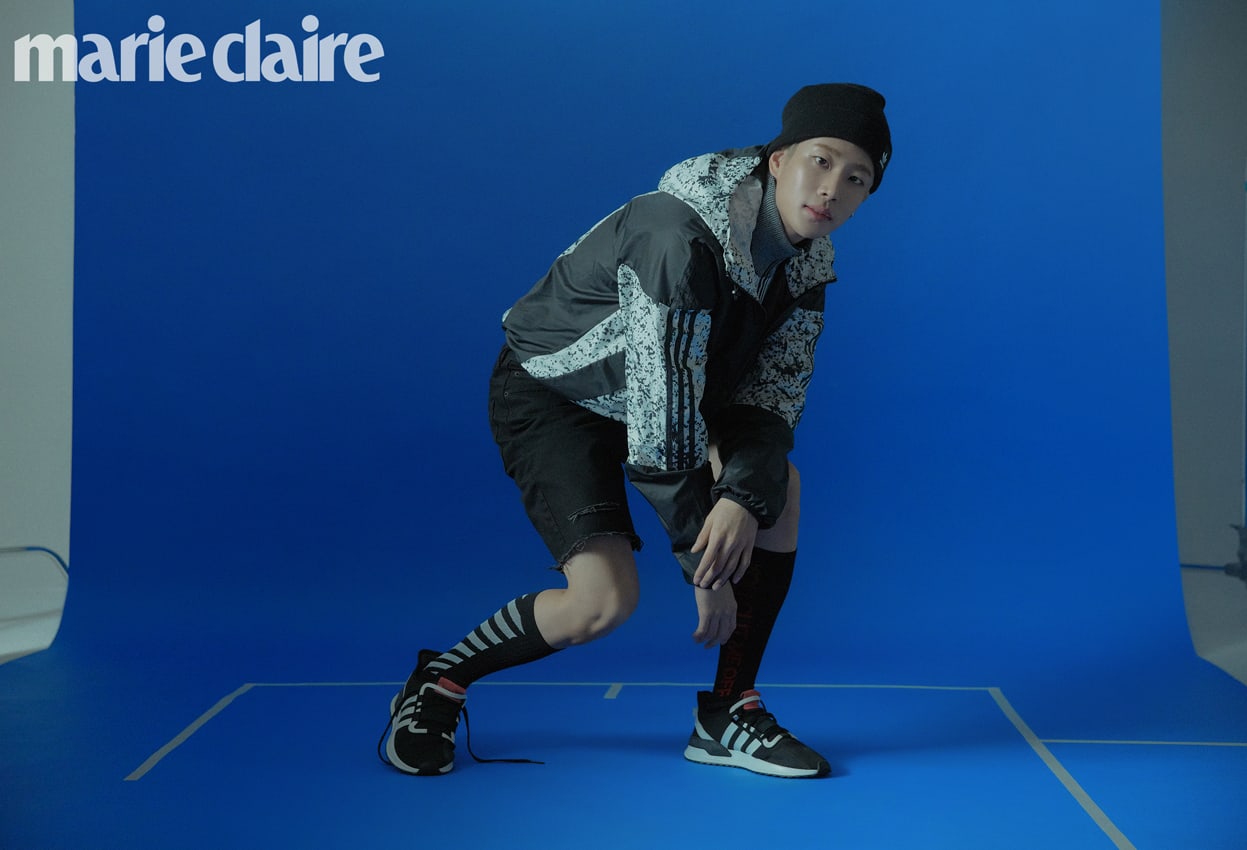 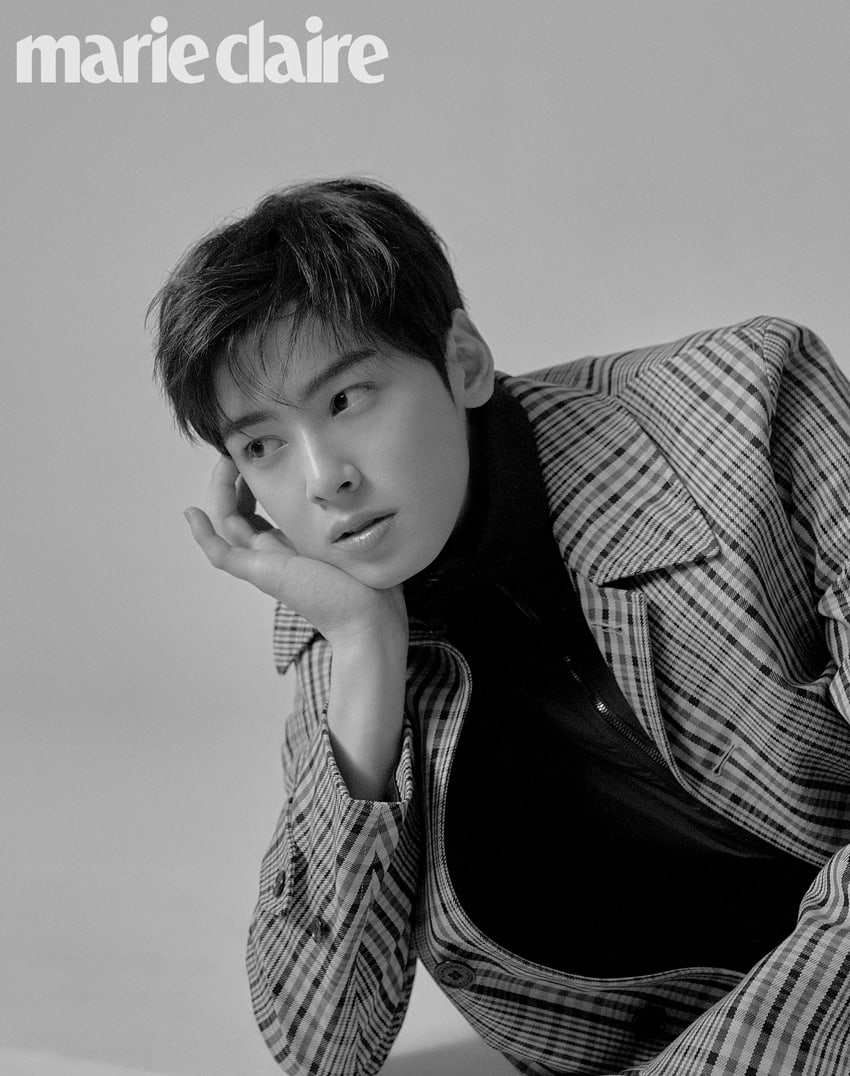 The boy group then shared a story about their attempt to break away from their everyday life. “There was a time when we all tried to breakaway and failed,” began JinJin. “I had wanted to go to a ski resort with the members for a long time. We happened to have a day off after the concert, so I talked with the director. I called him, but he immediately disapproved.”

Moonbin said with a laugh, “At the time, I thought to myself, ‘We should’ve just gone without saying anything.’ Then we at least could’ve gone even if we got yelled at.” MJ added, “[They said no] in case we got hurt since we were going to have a comeback.” Sanha stated, “They were right, but…” and JinJin added, “They were right, so we immediately agreed.”

The members also described each of their strengths in real life. MJ answered, “My strength is being loud” and Moonbin added, “MJ is the creator of the atmosphere.” MJ explained, “I like playing around with the members, so I’m just happy about that.” 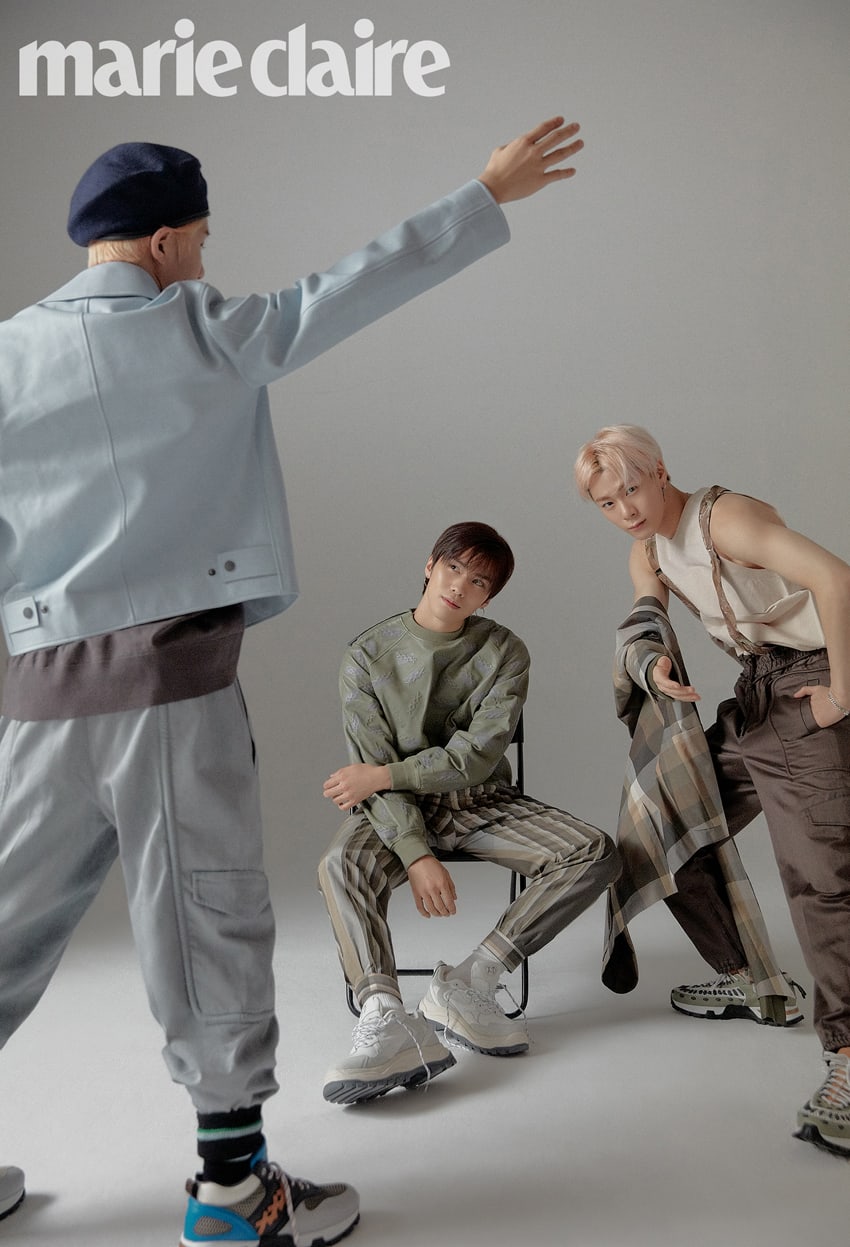 Hearing this, JinJin asked with a laugh, “Why did you say that in such a sad way? I might cry.” Moonbin stated, “I’m good at talking to someone who needs to face reality. For example, making MJ and JinJin exercise. I worked really hard at it, but I haven’t succeeded. I felt proud when I heard that Sanha is exercising these days and realized he has good thoughts. And another [strength of JinJin’s] is making fun of the older members.”

JinJin replied, “That’s right. My best strength!” Rocky added, “Bothering Cha Eun Woo” and the members described him as Cha Eun Woo’s biggest enemy. Cha Eun Woo said with a laugh, “He’s scary. The members are very playful, so we make fun of each other and bother one another.”

“It’s fun,” said JinJin. “We suddenly start talking for an hour and a half while practicing.” 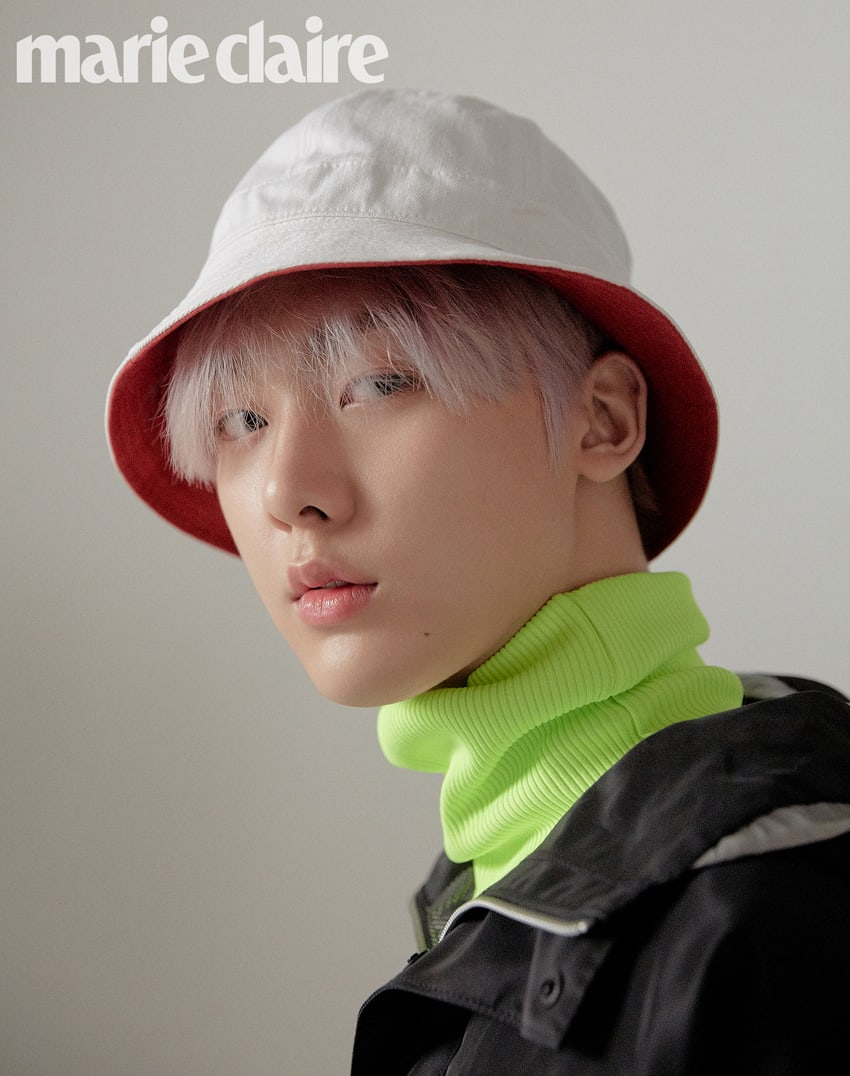 When asked about the topic of their latest conversation, MJ answered, “We don’t really talk about anything and we get off topic.” Moonbin explained, “If the conversation gets started with, ‘I bought this, but who ate it?’ then someone says, ‘No one ate it,’ and someone else says, ‘My sock is missing.’ Then another member says, ‘Who took my clothes?’ ‘I don’t know.’ We bicker and then suddenly debate about what to eat.”

Laughing, JinJin stated, “We then all go on a tour to delicious eateries.” Moonbin said, “We’re good at uniting. Especially in those moments.” “And then we come back and practice,” concluded Rocky.

As for what the group hopes to hear about this album, MJ responded, “Their hiatus was long, but it was a team worth waiting for.” Sanha added, “I don’t know about what I want to hear, but I hope that we can become a group where people say, ‘Ah! ASTRO’ when they hear ASTRO.” 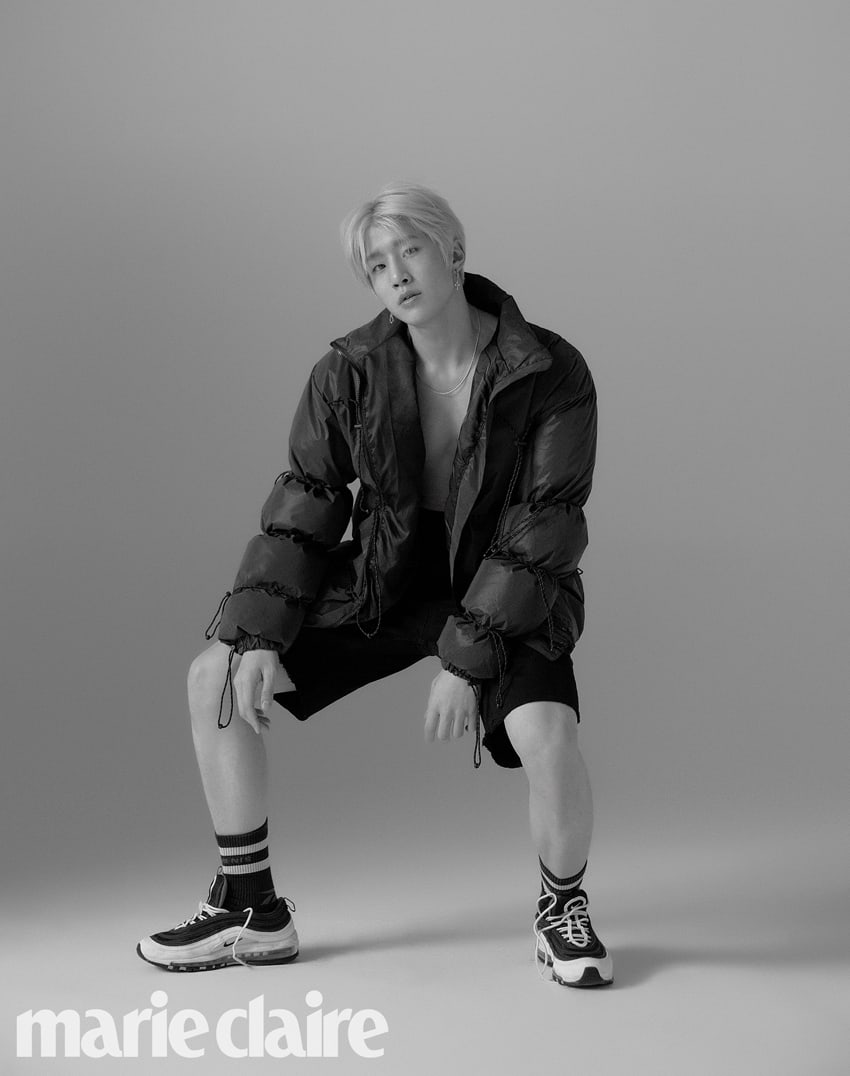 ASTRO’s pictorial and interview will be featured in the February 2019 issue of Marie Claire Korea magazine. Check out the MV for their latest title track “All Night” here!

ASTRO
Marie Claire
How does this article make you feel?