After BTS’s V released his new track, the group’s fans ARMY have been expressing their love and pride on Twitter!

V’s self-composed track “Scenery” (literal translation) was released at 10 p.m. KST on January 30, and soon after there were several worldwide trending topics about the song. They included #ProudOfYouTaehyung, #SceneryOutNow, #풍경OutNow, V of BTS by BTS, Kim Taehyung, and #ScenerybyTaehyung. 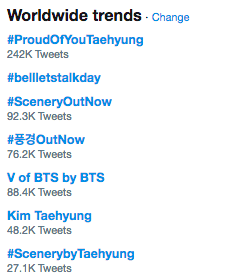 Check out some of ARMY’s tweets below!

remember taehyung's ment when he said.. "You are all part of my story, memory and SCENERY, thank you, i love you and we purple you"

now he gifted as a song as beautiful as a scenery, my heart ??#ProudOfYouTaehyung #SceneryOutNow @BTS_twtpic.twitter.com/rxxdwdyEbn

if you listen closely you can hear the sound that the camera makes when taking photos because taehyung is the photographer and as he said "you're all part of my story, memory and scenery"… we are his scenery… this is so- I'm not crying, you are#ProudOfYouTaehyung #Scenery pic.twitter.com/6Tw596P3gB

who saved the entire music industry with his new song?? #ProudOfYouTaehyungpic.twitter.com/ZXPiSbpyYH

Are you loving V’s new song?