Winners Of The 10th Film Award Of The Year

Outstanding films and actors were recognized at the 10th Film Award of the Year.

On January 30, the award ceremony took place at the Press Center in Seoul.

11 Bonsangs (main awards) and seven special awards were given out during the ceremony to films that were released from January 1, 2018 to December 31, 2018 as a result of votes from 64 companies and 90 reporters from the Korean Film Reporters Association.

This year’s Best Film award was given to director Yoon Jong Bin’s “The Spy Gone North.” The film was invited to the midnight screening of the 71st Cannes Film Festival and told the true story of the intelligence war between North and South Korea.

21st Century Fox Korea, the Korean distributor for “Bohemian Rhapsody,” received the Foreign Film Award and its CEO got up on the stage to thank viewers for their support. Joo Ji Hoon was named as the winner of the Best Supporting Actor award, but was unable to attend due to an overseas event.

Jin Seo Yeon, the winner of Best Supporting Actress, expressed her gratitude on stage. She said, “Thank you for giving lots of love to ‘Believer.’ It made me think that the world changed a lot. Boryung, who I portrayed, was a character you couldn’t see in Korean films in the past. I worried if the actress who portrayed this character would be able to appear in another film after this and I thought that I wouldn’t be able to work after this film ended. It was a very strong character, but I was so surprised and thankful that I received so much love from viewers.” 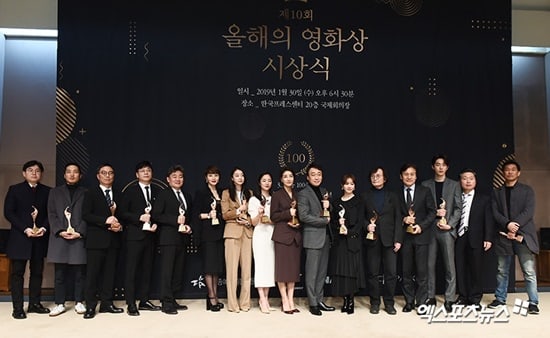 Best Actor Award recipient Lee Sung Min stated, “When I’m confident about a film, I also have confidence during interviews, and I felt confident when ‘The Spy Gone North’ was released. Thank you to those who made the film with me including director Yoon Jong Bin and actors Hwang Jung Min, Joo Ji Hoon, and Jo Jin Woong.”

Han Ji Min won the Best Actress Award and said, “I’m grateful that ‘Miss Baek’ could receive love amongst big films. I’ll become an actress who grows while showing good acting through good projects no matter the size of the film.”

Film Person of the Year went to director Kim Yong Hwa, who set a record for the highest number of moviegoers with “Along with the Gods: The Two Worlds” and “Along with the Gods: The Last 49 Days.” “My mind feels heavy because I’ve received this award for two consecutive years,” said the director. “Thank you to writer Joo Ho Min who gave me inspiration for directing.”

The Judge’s Award was selected by the judges of the Korean Film Reporters Association, and it was awarded to actress Kim Hye Soo who continues to challenge herself through various roles including her most recent film “Default.”

Discovery of the Year Award: Jeon Yeo Bin (“After My Death”)

Indie Film Award: “After My Death”

Film Person of the Year: director Kim Yong Hwa (“Along with the Gods: The Two Worlds”)

Promoter of the Year: CJ Entertainment’s Yoo In Ho