Park Jin Young was angered by the ideas for TWICE and GOT7 that were presented by the new JYP interns in Mnet’s “Super Intern.”

On the January 31 episode of “Super Intern,” the interns split into three teams to come up with their 2019 production plans for TWICE, GOT7 and Stray Kids. The 13 interns gathered together and received staff training from Park Jin Young, who explained, “The process is more important than the outcome, and common sense and lawfulness must be kept in the process.”

The first group to receive consulting was TWICE. Sana said, “I know what it feels like to be evaluated. Each and every word gets stuck in my heart,” while Dahyun stated, “They must do well. They can get eliminated through this.”

The T-Factory team mentioned TWICE’s global appeal and suggested the idea of a “T-Car,” a showroom where they can be met. They focused on communication with fans by providing QR codes and showing videos that were not released. There were also numerous other ideas such as application tickets and photo cards. However, TWICE looked somewhat disappointed.

The business team said, “I like the idea, but it’s hard to actualize it.” The interns then talked about the season’s greetings content, and those watching them commented, “They’re too busy explaining. I don’t know if the artists understood them.” Finally, the business team evaluated, “It’s too focused on fan marketing and content, and we can’t accept it because they only talk about the functional aspects associated with TWICE and goods.”

TWICE’s Jihyo asked, “What image do you want TWICE to build in 2019?” Then she added, “The members and I talk a lot about our bright and cute image. As we enter our fifth year, we talk a lot about whether people are bored with this image.”

Intern Lee Jung Bin replied, “You never get tired of meeting close friends even after 10 years. It’s only the background that changes. TWICE’s desire to approach their fans and build friendship with each other is essential.”

Park Jin Young disapproved of her answer and said, “When consulting, the key thing is to pinpoint the person’s itchy spot. Jihyo asked the same question over and over again, but she didn’t get any help. The intern didn’t sincerely address TWICE’s concern.” 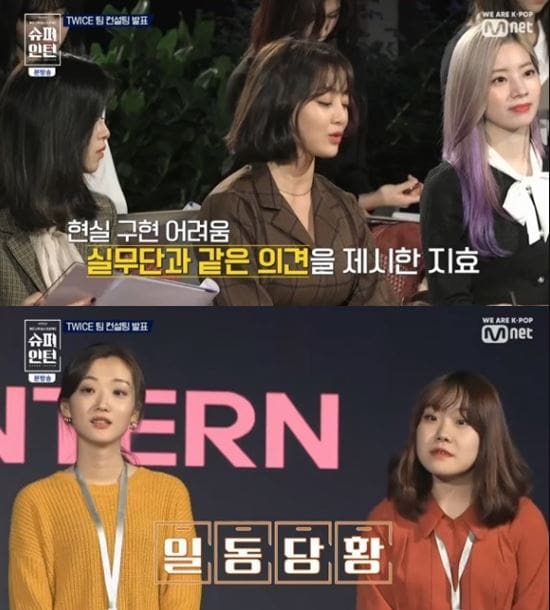 Next up was the GOT7 team presentation. They suggested a project titled “WE-GOT7” that can bring out the unique characteristics of all the members. The project was about the seven members producing their own title songs and having the fans vote on the best one. Mark flustered the interns when he commented, “I have no desire to write a title song yet.”

Their idea was also met with disapproval from the business team. They said, “It is likely that there will be internal division among the fans. It’s also not an original idea because the project was already done on ‘Wanna One Go.'”

Park Jin Young commented, “It’ll disappoint the fans if the songs decrease in quality. We’re already busy making songs for their delayed album, so is that even possible? I don’t think they know the meaning of consulting. GOT7 also took this as a joke and couldn’t concentrate.” He humorously expressed his anger by saying, “Let’s go get ice cream.” 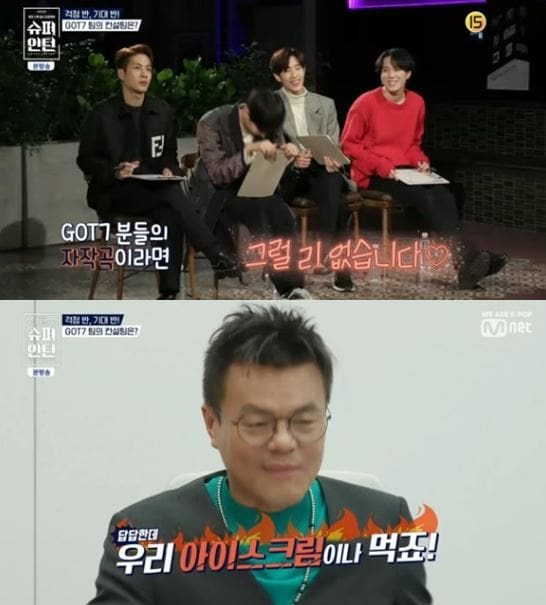 GOT7
TWICE
Park Jin Young
Super Intern
How does this article make you feel?