The identity of John Lennon on MBC’s “The King of Mask Singer” has been revealed to be the main vocalist of a group gearing up for a comeback this month!

The February 3 episode of “The King of Mask Singer” featured performances by eight idols in a Lunar New Year special. The first round had John Lennon and Pavarotti going up against each other, and they performed Bruno Mars’s “Runaway Baby.”

Not only did they have the chance to perform as a duo, but they also performed by themselves as well. Pavarotti performed The Ray’s “Cleaning” while John Lennon took on Position’s “I Love You,” both showcasing their melodious voices.

For the Lunar New Year special, votes were tabulated by combining the results of the duet and the solo. Pavarotti took the win in the duet by a vote of 54 to 46, and then moved on to the next round with a combined vote of 108 to 91.

With Pavarotti moving on to the next round, John Lennon took off his mask to reveal that it was none other than SF9’s main vocalist Inseong. He said, “It’s too bad. I thought I’d be less nervous during the actual show than I was during rehearsals, but I was so full of nerves by the time I stood in front of everyone that I don’t remember how I did.” 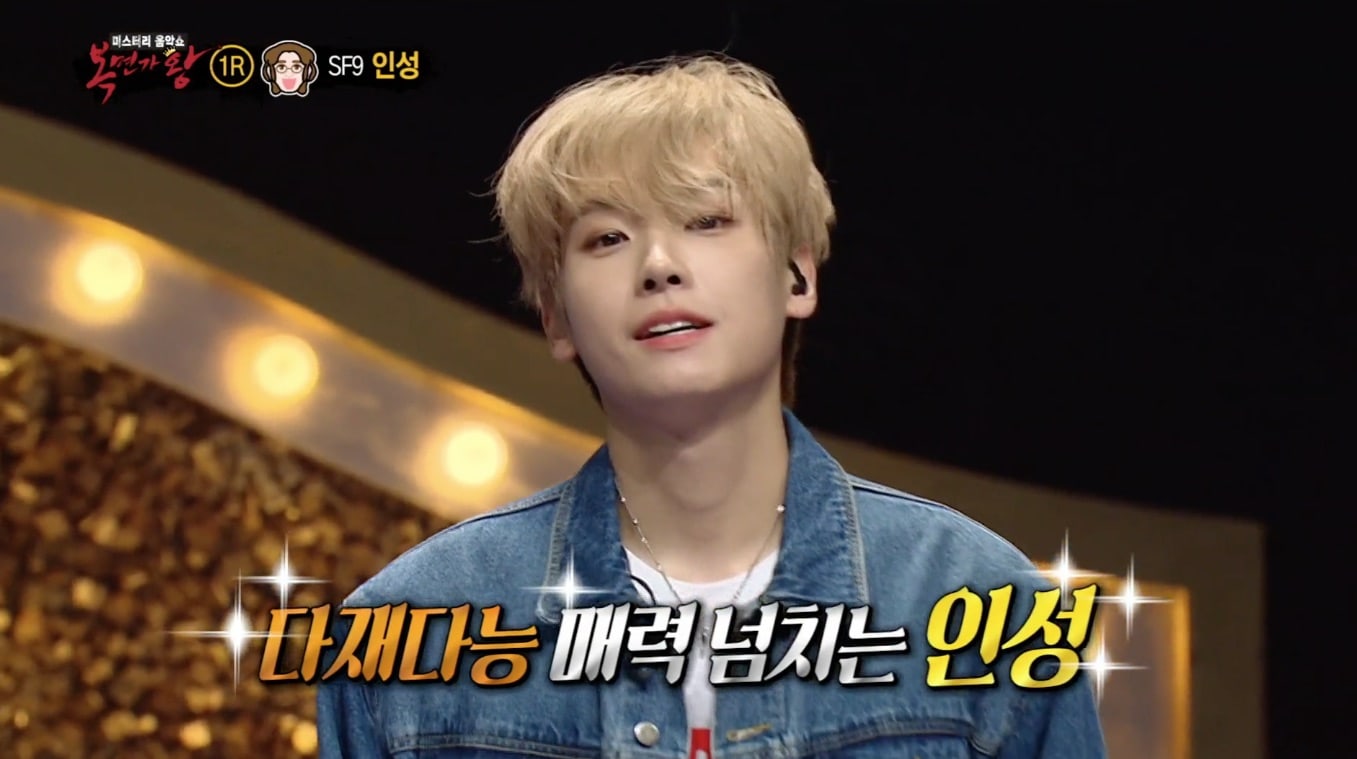 Inseong confessed that during his trainee days, he had been told that he sounds like a robot. He said, “I’d get dragged out as soon as I entered a recording booth. I was told that just getting the notes and beats right didn’t make a good song. Those words motivated me and I tried to put as much emotion into my rendition of ‘I Love You.'”

Given 10 seconds of PR, Inseong said, “Firstly, I want to apologize to our CEO. And I want to thank everyone who came here and SF9 will be making a comeback in late-February. We promise to return even better than before.” In his interview in the waiting room after the performance, Inseong added, “I fell to my knees as I was leaving. This was a show I’ve wanted to be on since I was a trainee, and I really enjoyed performing on stage by myself. Though I’m sad [to be eliminated], I hope everyone has a great Lunar New Year.”

After the broadcast, Inseong took to Twitter and said, “Thank you to everyone who helped create a stage for me to sing. I will continue to grow and become a better Inseong. Thank you Fantasies!”

Check out his performances and reveal below!

SF9
Inseong
The King of Mask Singer
How does this article make you feel?