Watch: Stray Kids, The Boyz, And Golden Child Face Off In Penalty Shootout To Gear Up For 2019 Idol Star Athletics Championships

Members of all three idol groups will be competing in the new penalty shootout event this year, and they prepared for the competition by holding a special match for charity. The winners of the match had a 5 million won (approximately $4,463) scholarship donated to the children of deceased firefighters under their names.

Each of the three groups teamed up with a famous soccer player for the match. Stray Kids’ Hyunjin, Lee Know, and Bang Chan joined forces with former player and current coach Yoo Sang Chul; The Boyz’s Juyeon, Hyunjae, and Ju Haknyeon teamed up with the legendary Lee Chun Soo; and Golden Child’s Jibeom, Bomin, and Tag formed a team with soccer star Hyun Young Min.

After some coaching from their mentors, the idols went head-to-head in a tournament-style penalty shootout match. A brief game of hacky sack determined that Stray Kids would advance to the finals, leaving The Boyz and Golden Child to face off in the first round. 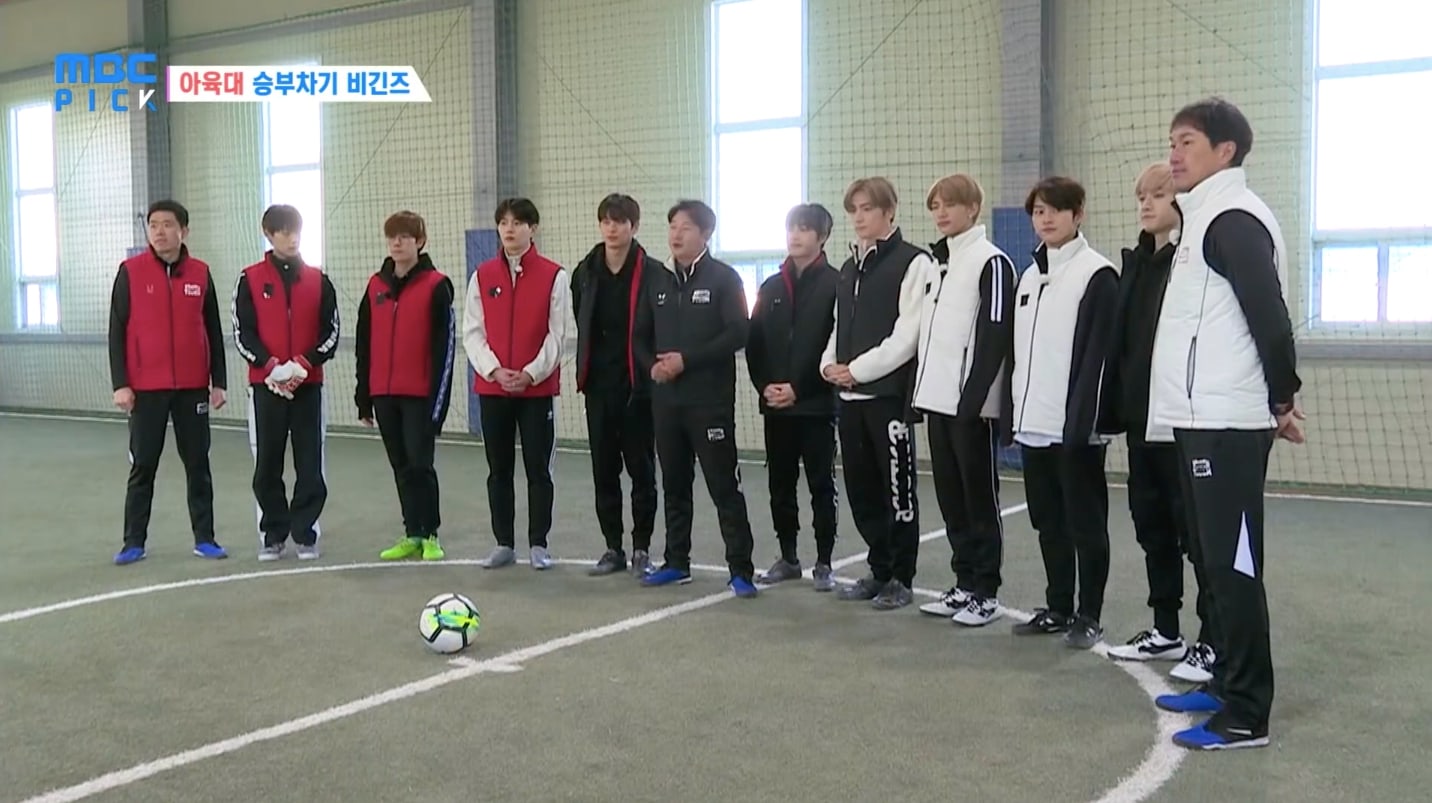 Each of the players were given one chance to shoot, including the professional athletes. The idols went first, and both Golden Child’s Jibeom and The Boyz’s Juyeon successfully scored goals, tying the score 1 to 1.

It therefore fell to the professional soccer players to determine the outcome of the game, and unfortunately, Hyun Young Min missed his shot. Lee Chun Soo was less unlucky, and The Boyz ended up advancing to the finals. 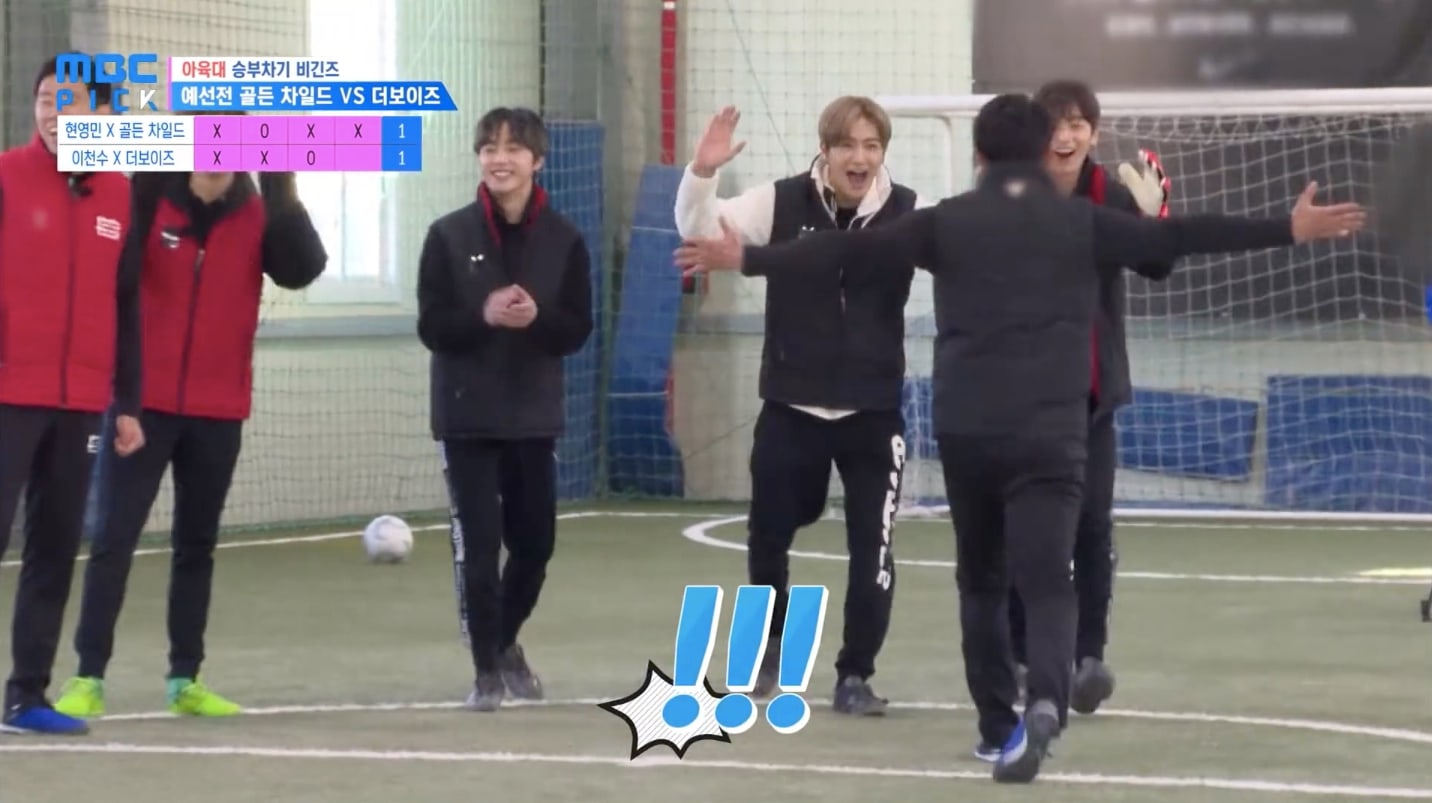 Tension was high from the start of the final round, with Stray Kids’ Hyunjin scoring a goal on the very first shot. Using tactics that he had learned from mentor Yoo Sang Chul, goalkeeper Lee Know jokingly attempted to psych out the other team—but The Boyz’s Hyunjae was still able to make his shot.

Bang Chan and Juyeon also went on to score goals, tying the game at 2 to 2. After seeing Juyeon’s skillful shot, mentor Lee Chun Soo commented in awe, “What is this? This isn’t a [skill] that I taught you!” 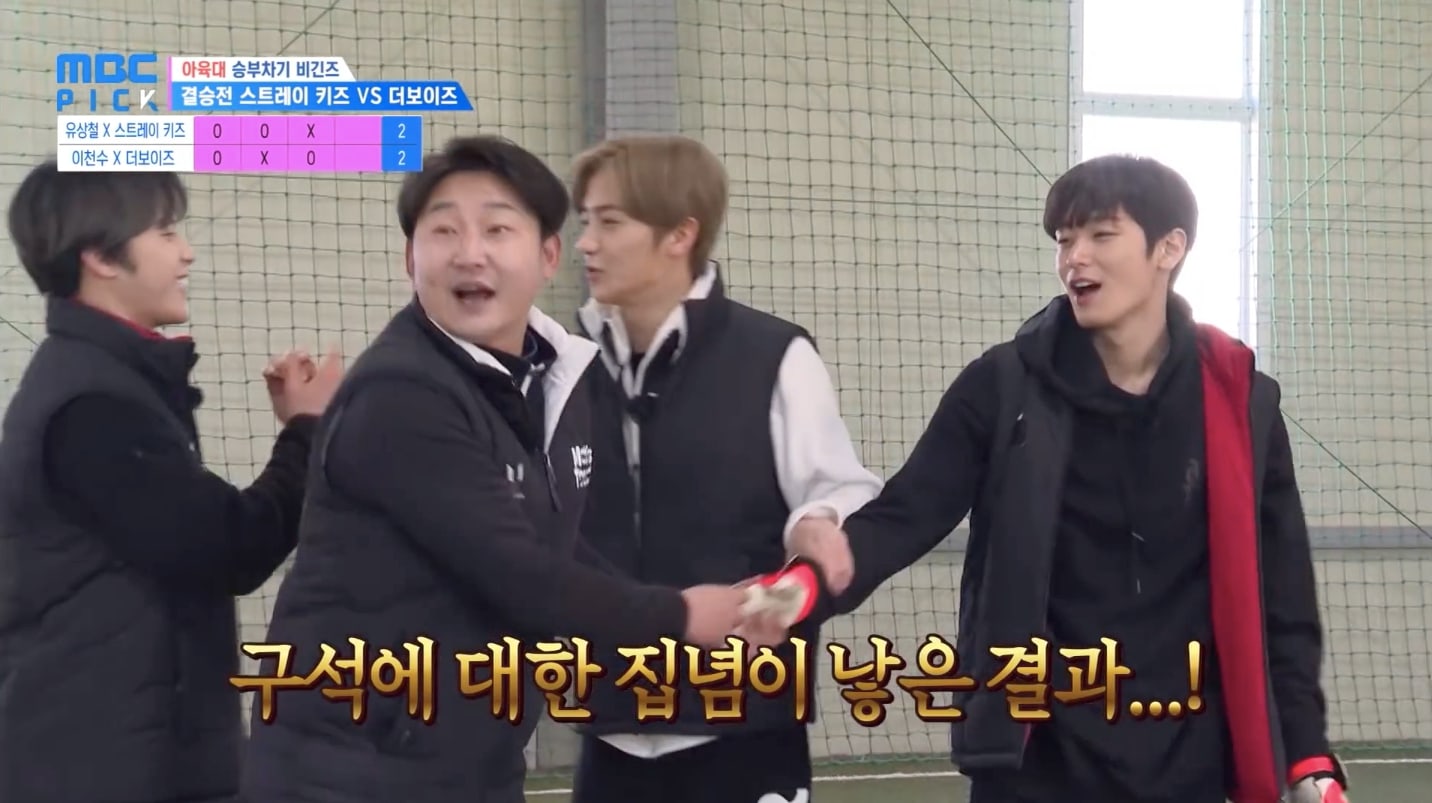 Once again, it fell to the professional athletes to break the tie. Goalkeeper Juyeon successfully blocked Yoo Sang Chul’s shot, leaving it to Lee Chun Soo to finish the game.

For a moment, the Stray Kids members rejoiced as goalkeeper Lee Know blocked Lee Chun Soo’s shot—but to their shock and dismay, the ball proceeded to bounce off the inside of the goal post and fall back in. 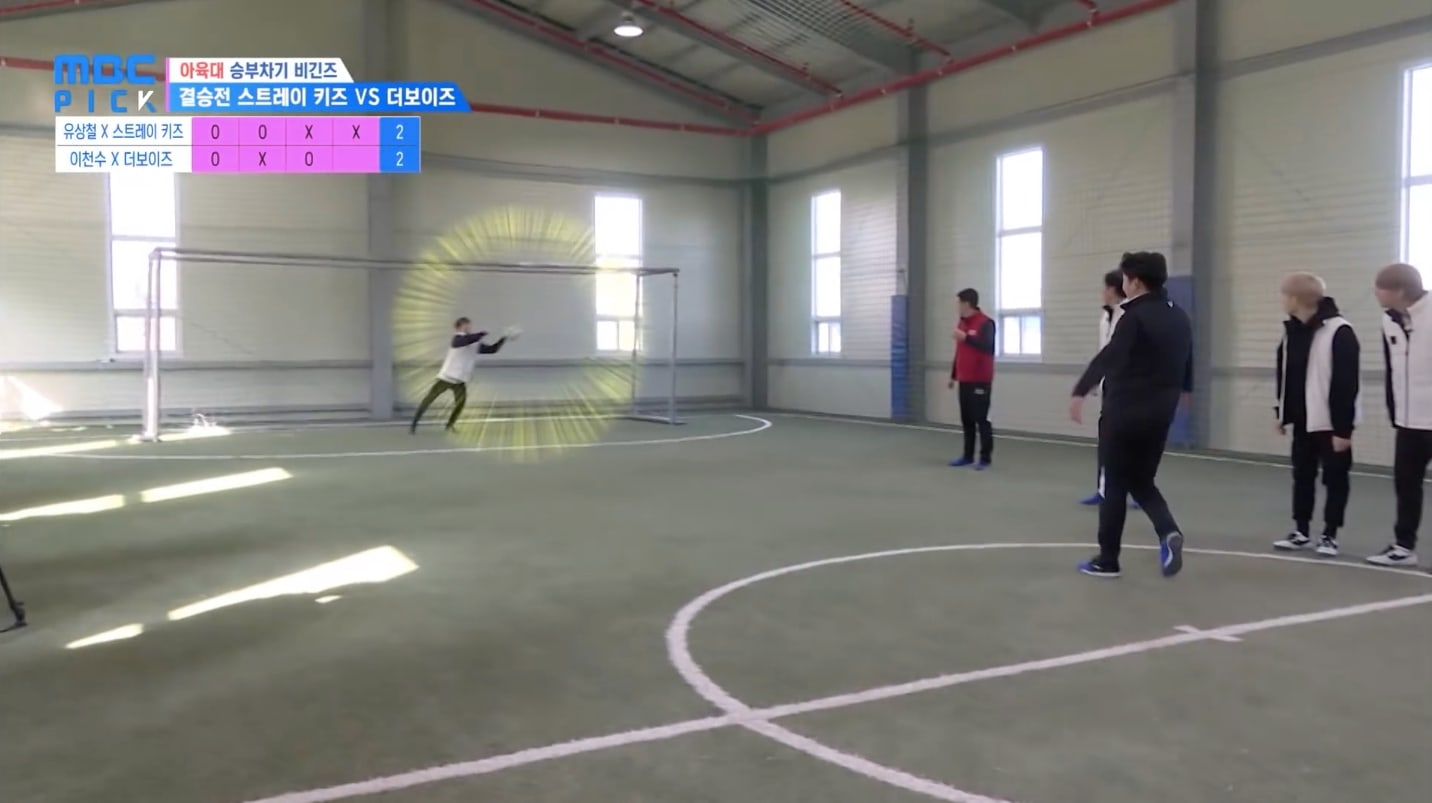 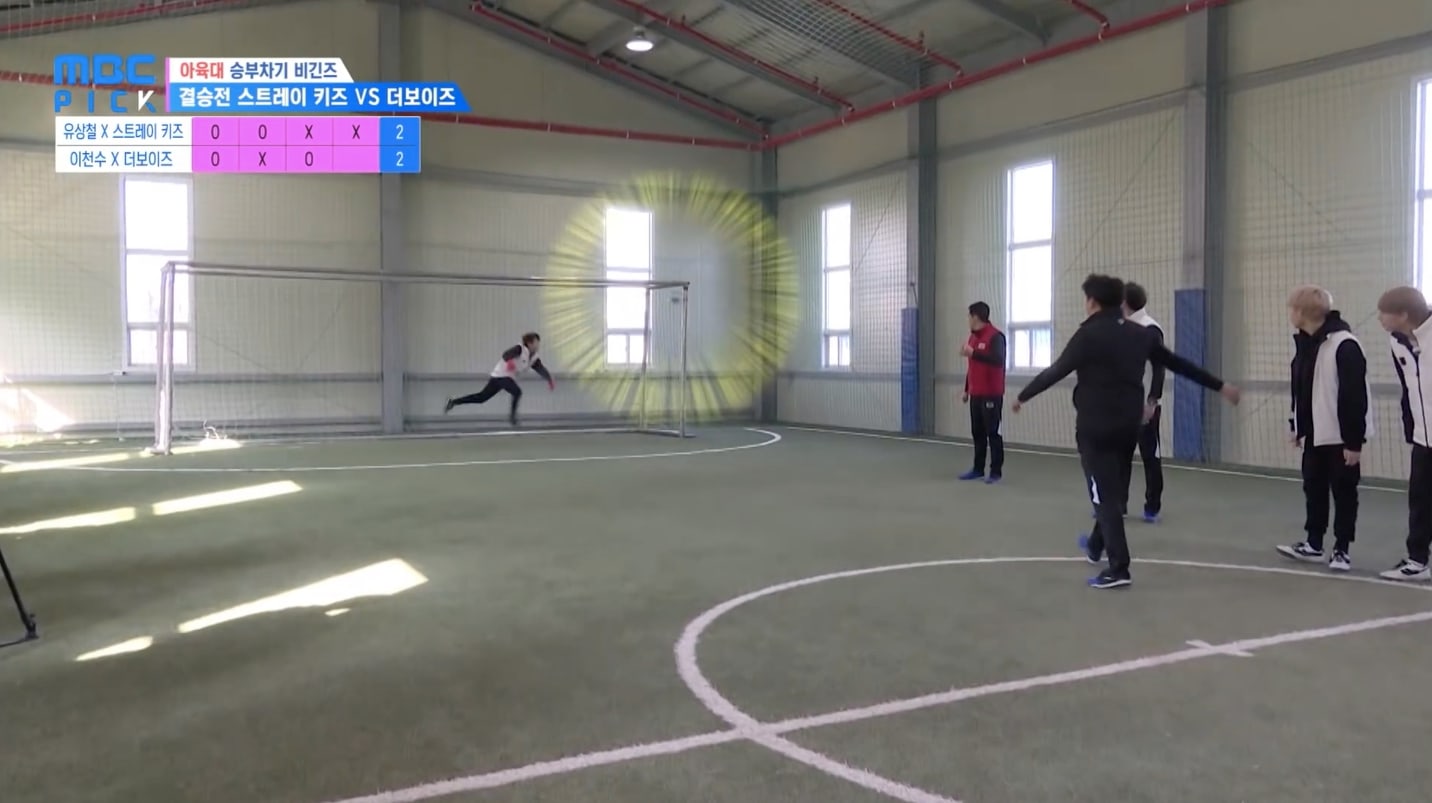 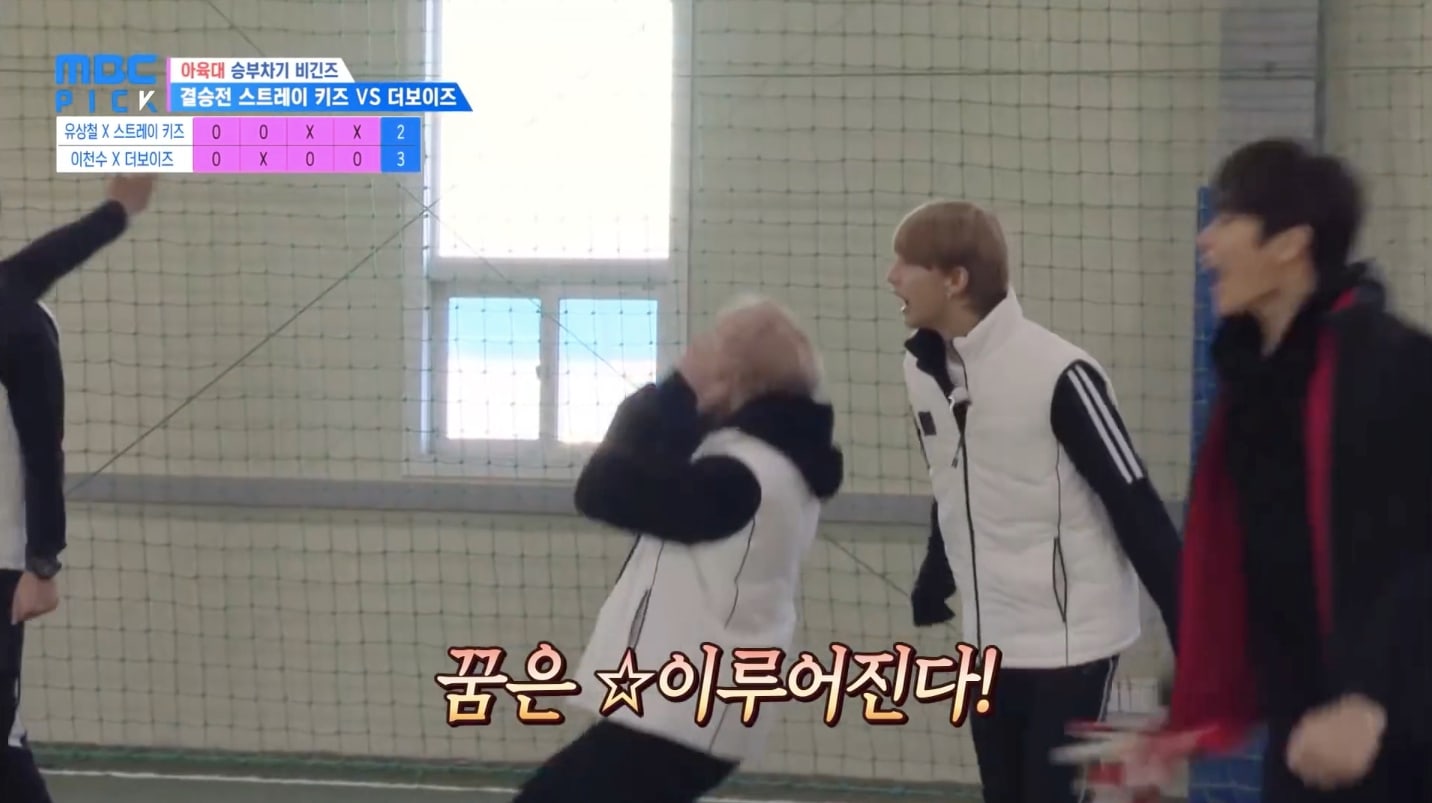 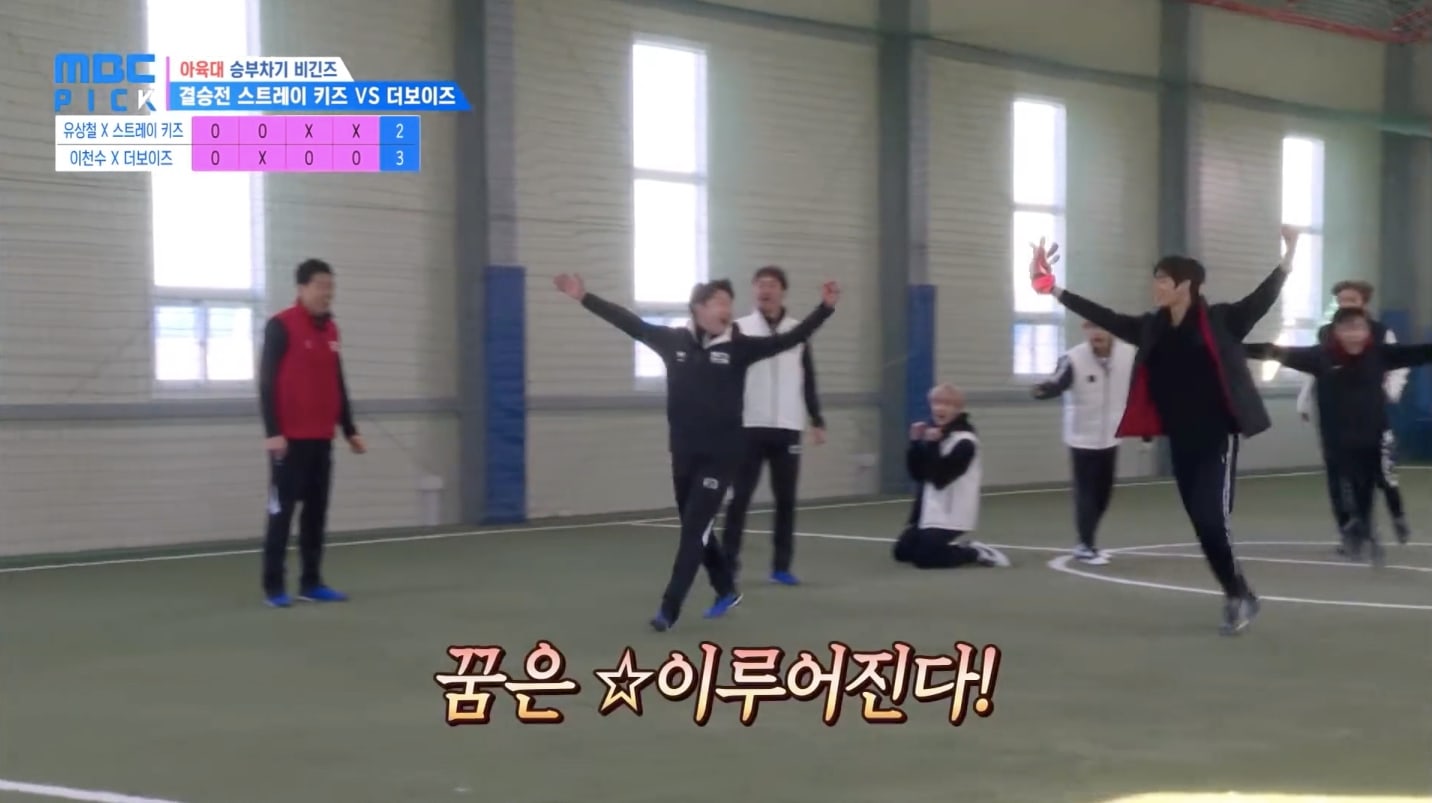 After The Boyz’s team triumphantly celebrated their victory, an impressed Lee Chun Soo bowed to Lee Know and remarked, “No one’s ever been able to lay a hand on a ball that I [kicked] before. Wow. You’re amazing.”

Lee Know bowed back and replied with a smile, “I’ll use the energy I received [from that ball] so that we can win a gold medal at the Idol Star Athletics Championships [this year].” 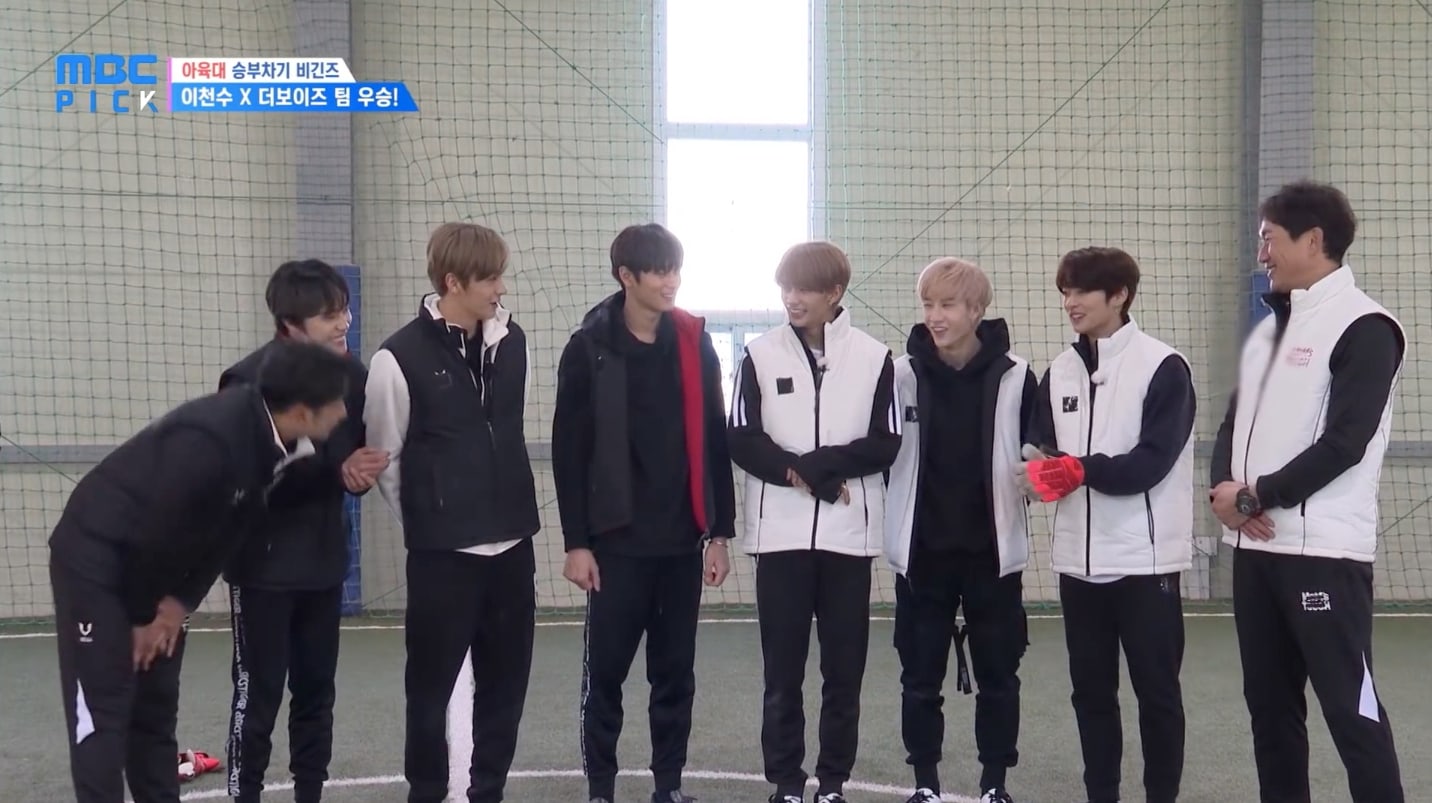 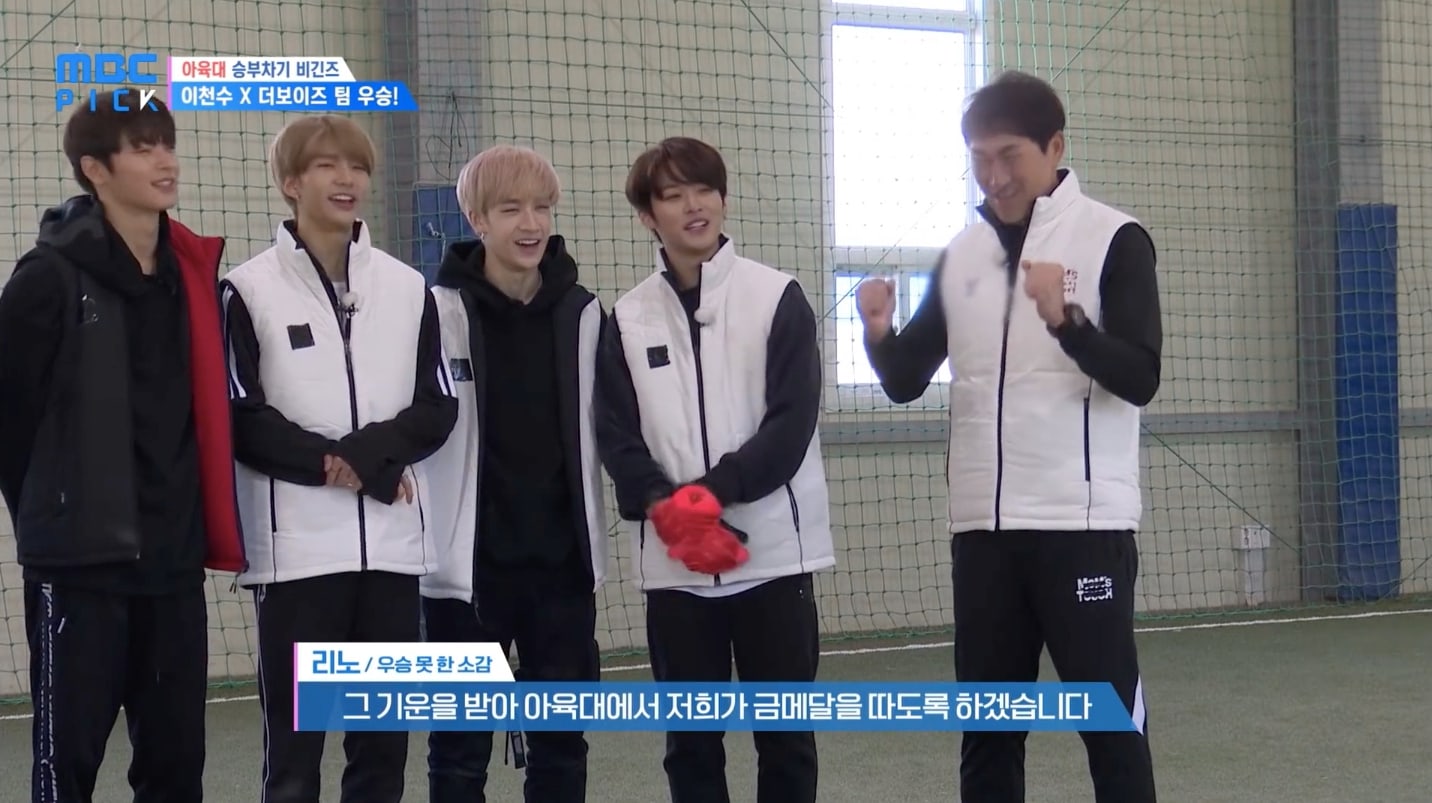 Meanwhile, The Boyz’s Hyunjae humbly remarked, “If it had been just us the Boyz members, I don’t think we would ever have been able to win first place. I think we made it this far because we had mentor Lee Chun Soo on our team.”

Juyeon added, “It turns out that soccer isn’t something you play with [just] your body. Your mind is what’s important.” 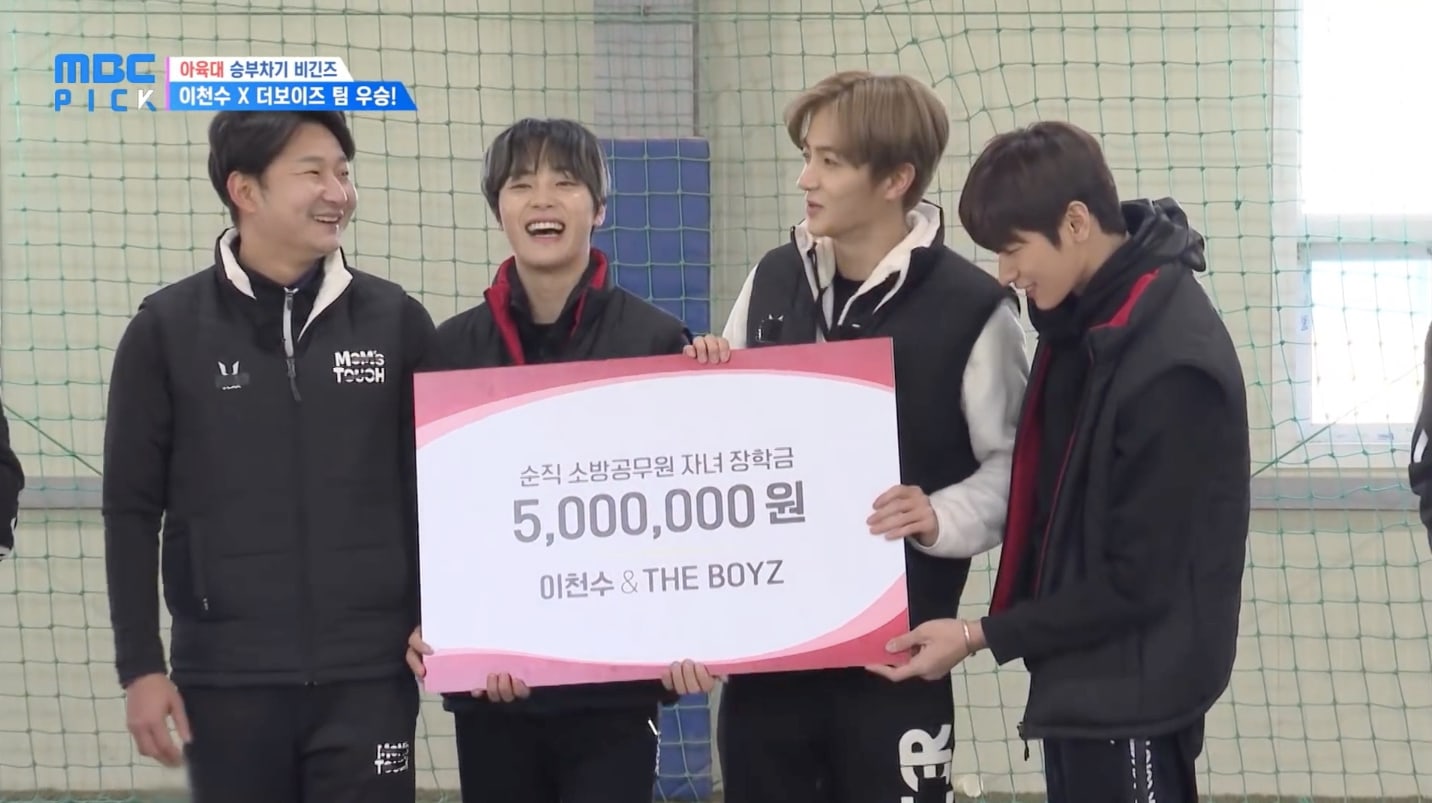 Congratulations to The Boyz!

To find out who wins the real penalty shootout event, which will also feature competitors from SEVENTEEN, iKON, MONSTA X, NCT 127, and ASTRO, tune in to the “2019 Idol Star Athletics Championships – New Year Special” on February 5 and 6 at 5:45 p.m. KST. The special will also be available with English subtitles on Viki.

In the meantime, you can watch the special charity match below, and you can check out the latest preview for the event here!