On KBS1’s “Do Ohl and Ah In Go In All Directions,” actor Yoo Ah In talked candidly about his education through life experience.

A topic on the February 2 episode of the program was the current state of the education system in Korea. This included the way that many students use private education to achieve acceptance into prestigious institutions such as the famous top three universities known together as “SKY.”

Yoo Ah In, who is one of the co-hosts of the show, dropped out of high school when he was young. When asked what kind of education he received from his parents, he replied, “I was close with my parents, and we talked a lot about this and that. But then I became rebellious and I came to Seoul. Suddenly I changed my career plans and told them I would become an actor. They didn’t give their consent or protest; instead they just firmly asked about my personal opinion and then let me be free.”

He added, “I think of it as lucky that I had the will to quit school early. I had the courage to try planning another life and just recklessly threw myself into it. Because I did that, I was able to turn every moment that I’ve come up against in my life into an opportunity for my personal education.”

“Since I debuted at a young age, I played characters who were my peers,” he said. “I would think hard about the characters, do research, and investigate the world that they lived in. That’s not something that would happen if you just went to a SKY university.” 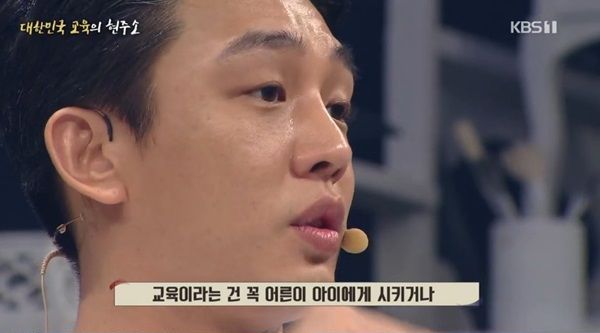 “This isn’t just became I’m an actor,” he explained. “The place where we live becomes our base for learning. It’s up to each person to choose what they’ll learn there.”

Yoo Ah In was also asked what kind of education he’d want to give his child if he becomes a father in the future. He replied, “I don’t think that education is just an adult teaching a child or a parent teaching their son or daughter.” He added, “I would want to make it so that they can take life’s wisdom from moments when they share thoughts with people, when they both inspire them and are inspired themselves.”

Yoo Ah In
Do Ohl and Ah In Go In All Directions
How does this article make you feel?