“Dear Dara,” the letter began. “I sincerely wish you a happy birthday and hope that your days ahead will only be full of good and happy things. I’m so happy I got to know Dara!” Tony Ahn added, “She’s someone that I cherish and it’s platonic to the point where I can use the expression that I love her.”

He then talked about his friends’ outlook on his dating life. He began, “I always get scolded by Hwangbo because she says that I’m bad at dating,” and Hwangbo stated, “There’s a frustrating part about him. I’m sure he dated well when he was young and in his 20s, and that many women were interested without him trying. But as he gets older, I think he’s getting more scared. He said that he waits and watches.”

She continued, “He said that there was potential for a girl who’s a friend to become a girlfriend, but I told him that someone else might steal her while he waits and watches.” JeA also mentioned that she speculated about Tony Ahn’s feelings towards Sandara Park. He explained, “Waiting and watching could sound strange, but it’s just describing the time that two people need to confirm their feelings for each other.”

MC Park Na Rae asked, “Are you waiting and watching Sandara Park?” and he replied, “It’s not like I hang out with someone after establishing that someone is only a friend and that we’re definitely not in a romantic relationship.” He responded with playful dismay when the MCs asked if he was keeping an eye out for Hwangbo and JeA.

When asked about his stance on Sandara Park, Tony Ahn didn’t directly answer the question and made everyone burst into laughter. At the request of the MCs, Tony Ahn and Sandara Park held hands and looked into each other’s eyes for 10 seconds. MC Kim Sook commented, “I could feel that Tony Ahn was sending her a message with his eyes. He asked, ‘Do you know my feelings?’ Sandara Park was really shy.” 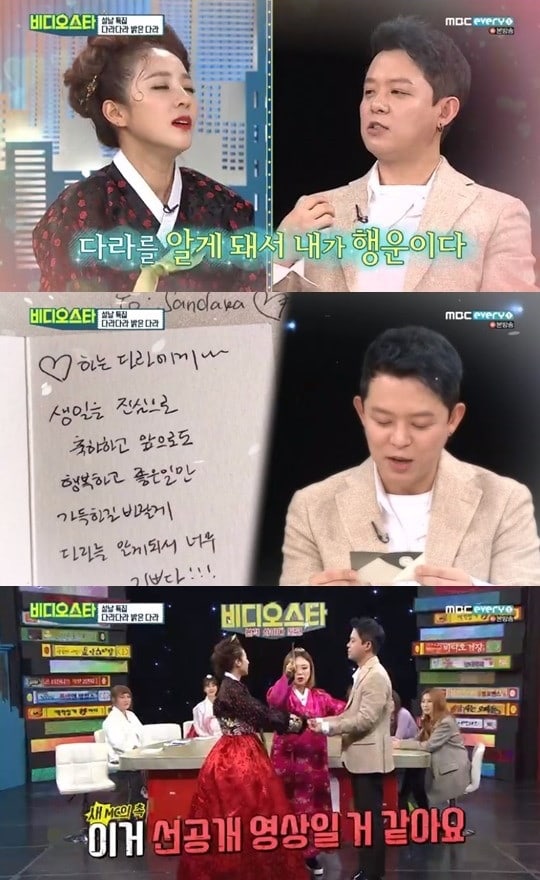 Tony Ahn confessed, “I used to like Dara. At the time, we didn’t even have opportunities to run into each other. Now, we have a really close and comfortable relationship, so I don’t know what to do when we talk about these kinds of things.” When he asked her if she was startled, Sandara Park wittily replied that she got the necessary footage for a successful first day of filming.

Sandara Park
Tony Ahn
Video Star
How does this article make you feel?