After beginning the special with day one on February 5, the second part of this season’s events were aired on February 6. You can check out the results from day one here!

Check out the results from day two below!

The penalty shootout was added as a new event this season to commemorate the 10th anniversary of the “Idol Star Athletics Championships.” In the quarterfinals, iKON won against SEVENTEEN, ASTRO won against Golden Child, The Boyz won against Stray Kids, and NCT 127 won against MONSTA X. Those four teams therefore advanced to the semifinals.

In the semifinals, iKON and The Boyz were matched up first. They played a close game that ended in a showdown between their goalkeepers to break the tie, and Chanwoo was the only one to score a goal. iKON therefore earned a place in the finals. 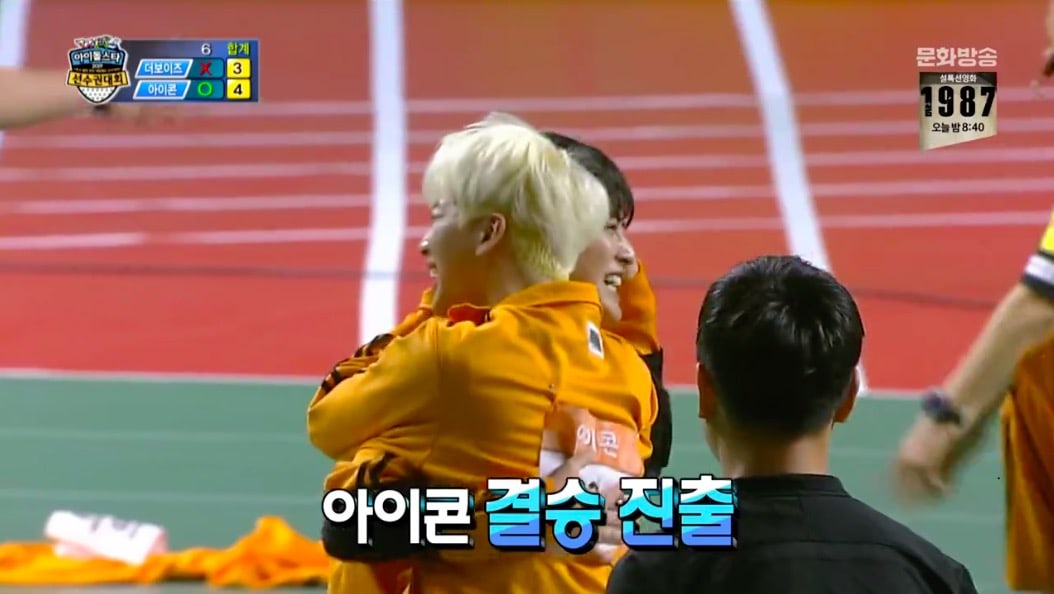 NCT 127 and ASTRO also went head to head in the semifinals, and ASTRO took the win with a score of 4 to 2. 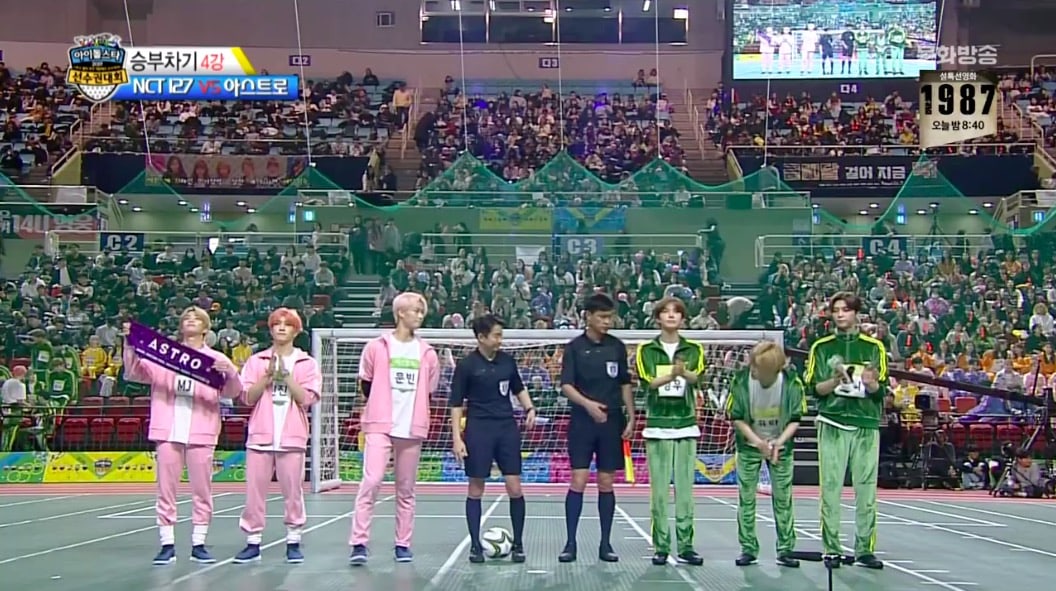 In the finals, ASTRO’s Moonbin and iKON’s Chanwoo impressed with their amazing defensive skills as goalkeepers. In the end, the two idols had a showdown. 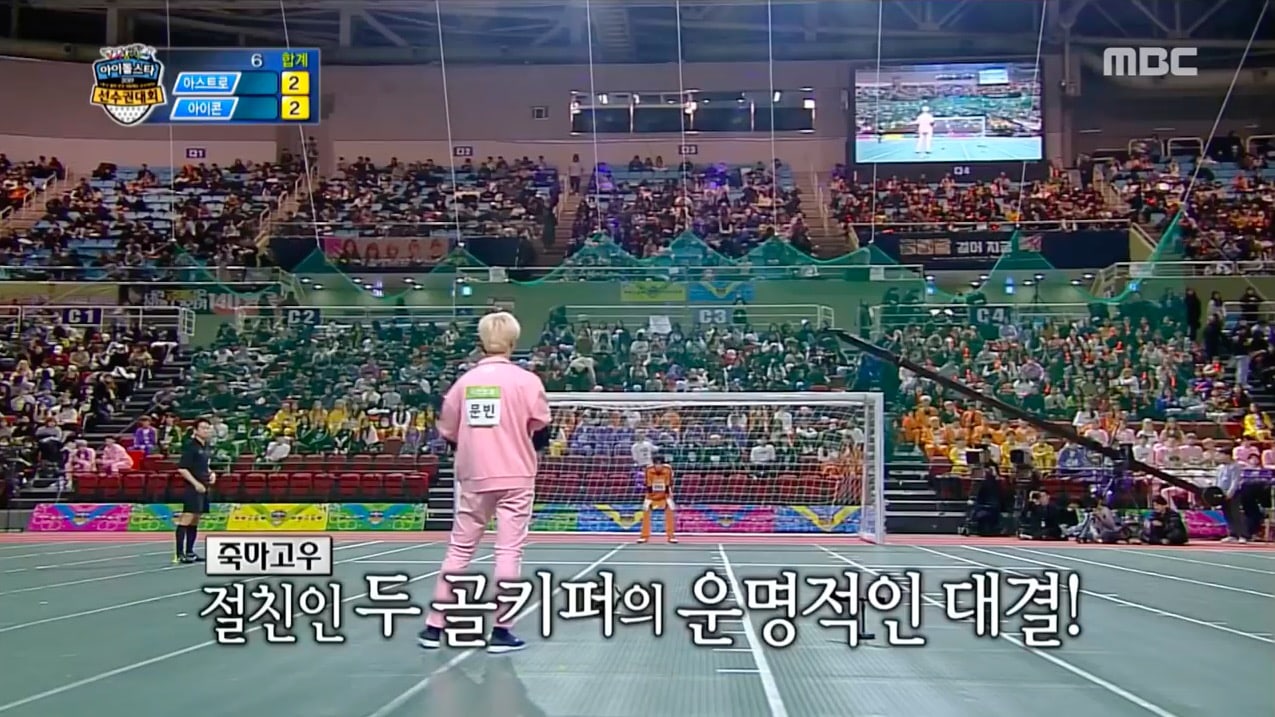 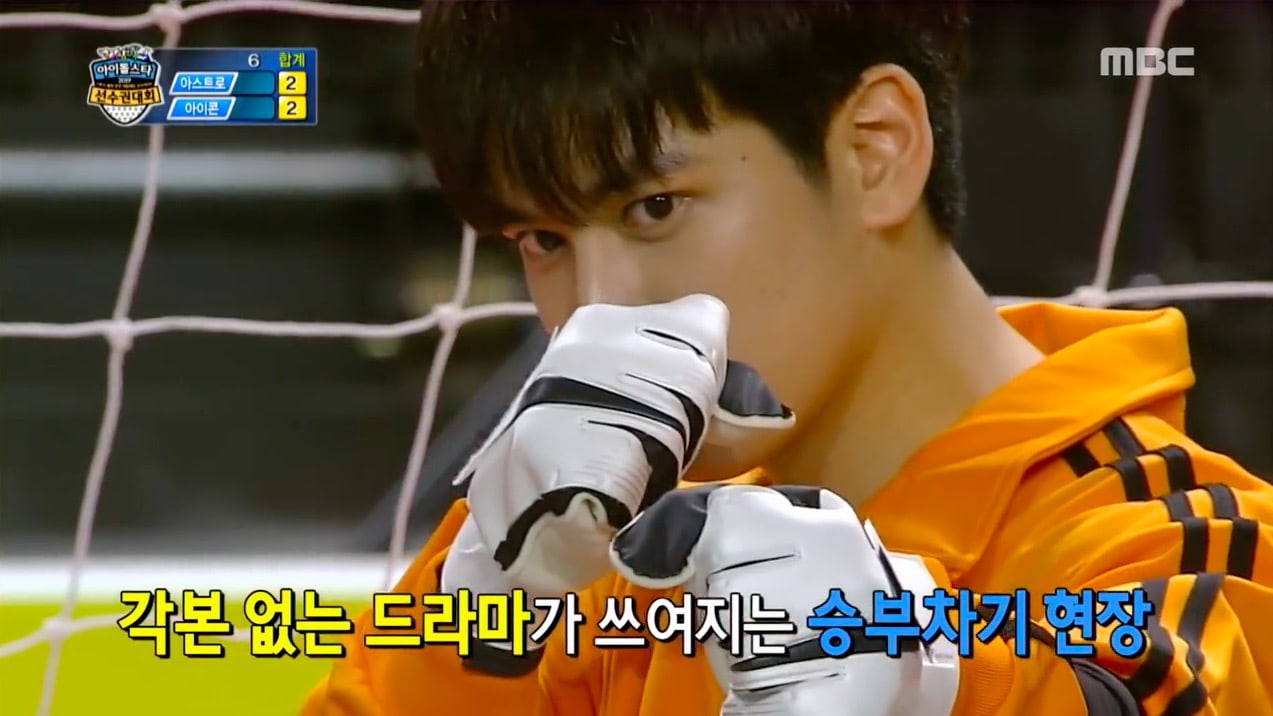 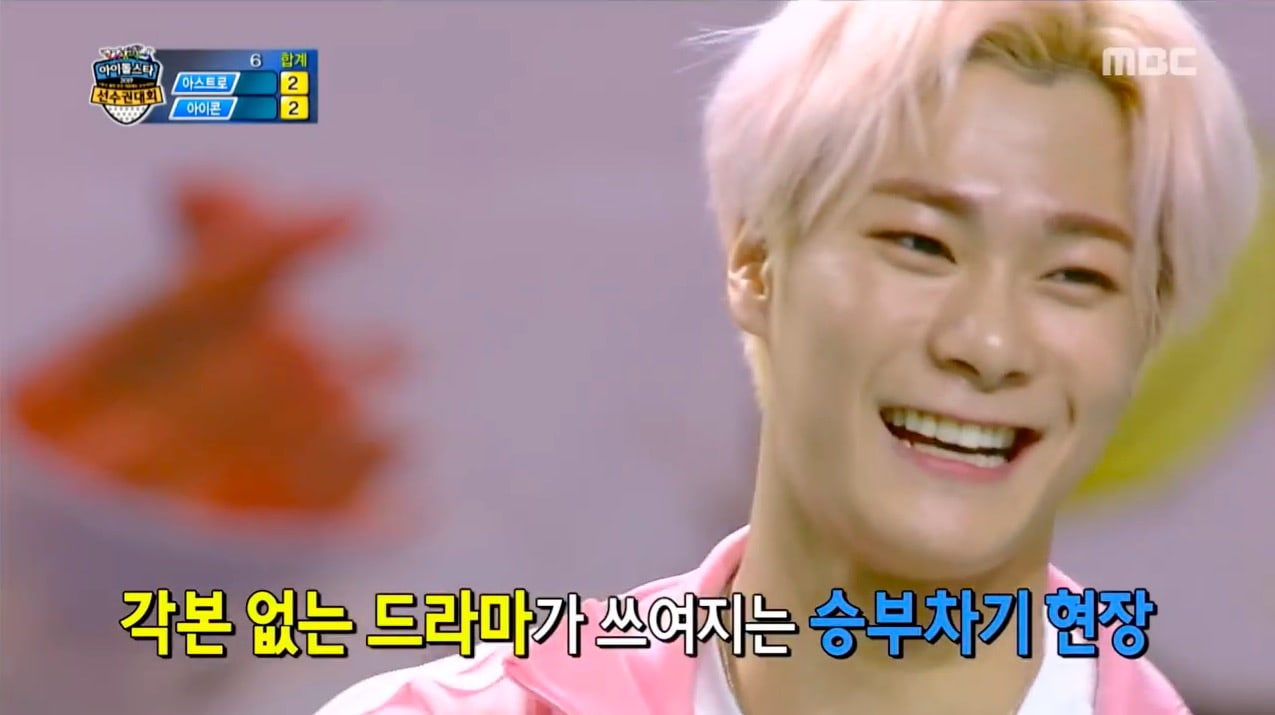 Moonbin’s kick scored his team a goal, and he then blocked Chanwoo’s shot, securing ASTRO the gold medal. As the first winner of the penalty shootout competition, they also received a set of Korean beef! 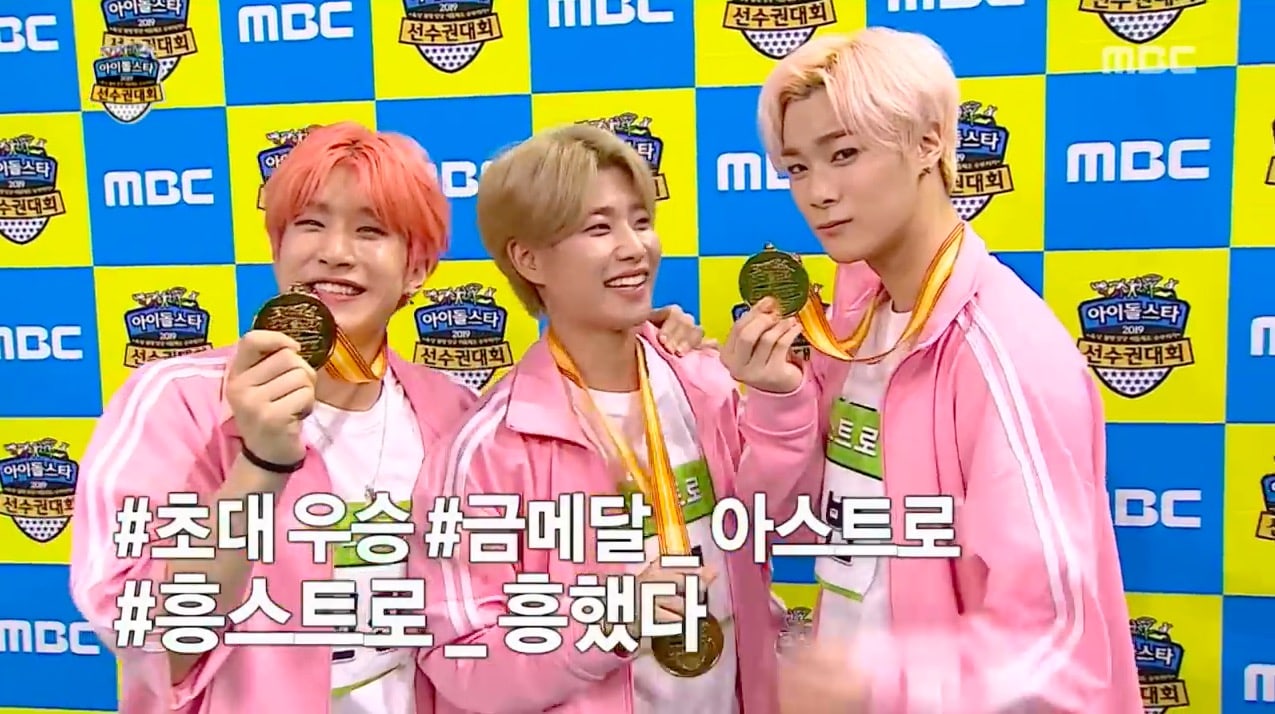 In the bowling event for female idols, Celeb Five and MOMOLAND were matched up in the semifinals, and Celeb Five won with a score of 101 to MOMOLAND’s 78. 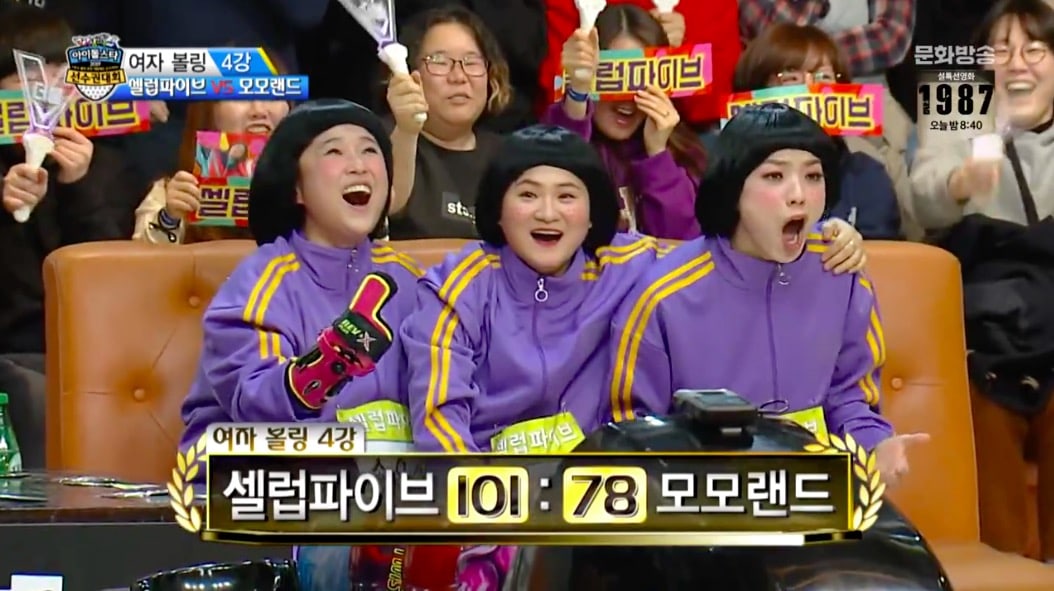 gugudan and Celeb Five therefore both advanced to the finals. gugudan’s Kim Sejeong and Kang Mina amazed as they kept achieving strikes or spares, and won with a score of 155. They set a new record for female idols at the “Idol Star Athletics Championships”! 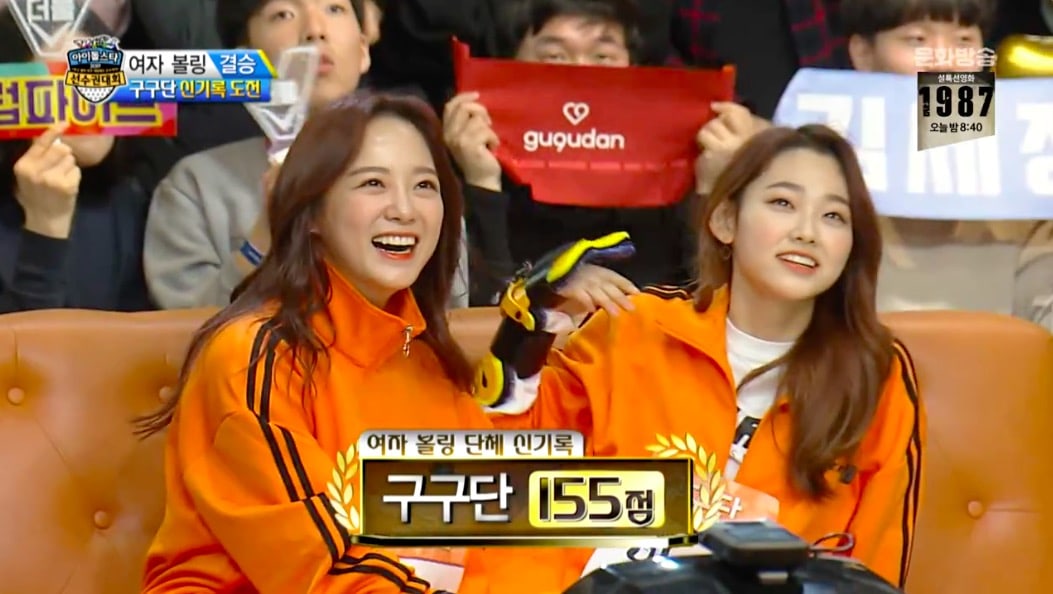 The finals between male idols in bowling featured EXO’s Chanyeol going up against NCT 127’s Jaehyun. Chanyeol previously won gold at the championships, while Jaehyun had amazed in the semifinals by setting a new overall score record after bowling six strikes, despite only beginning to bowl three weeks before.

After an intense match, Chanyeol took the win with a score of 217 to Jaehyun’s 195. 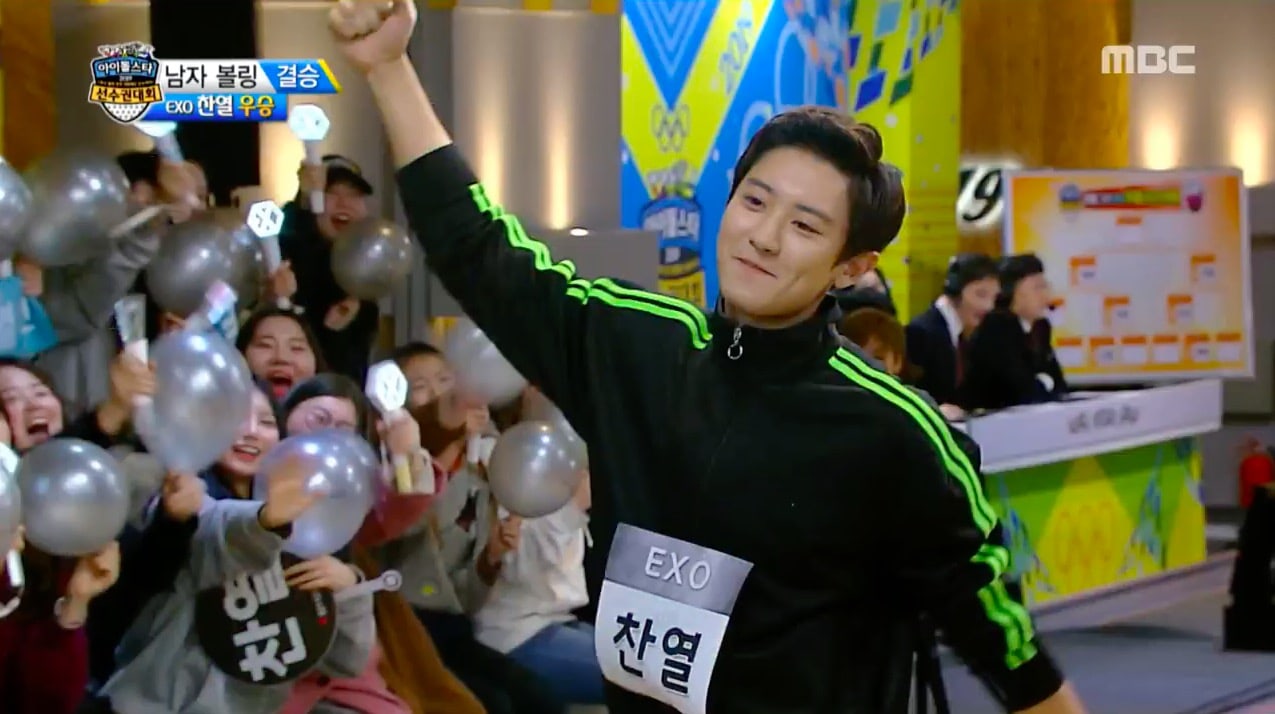 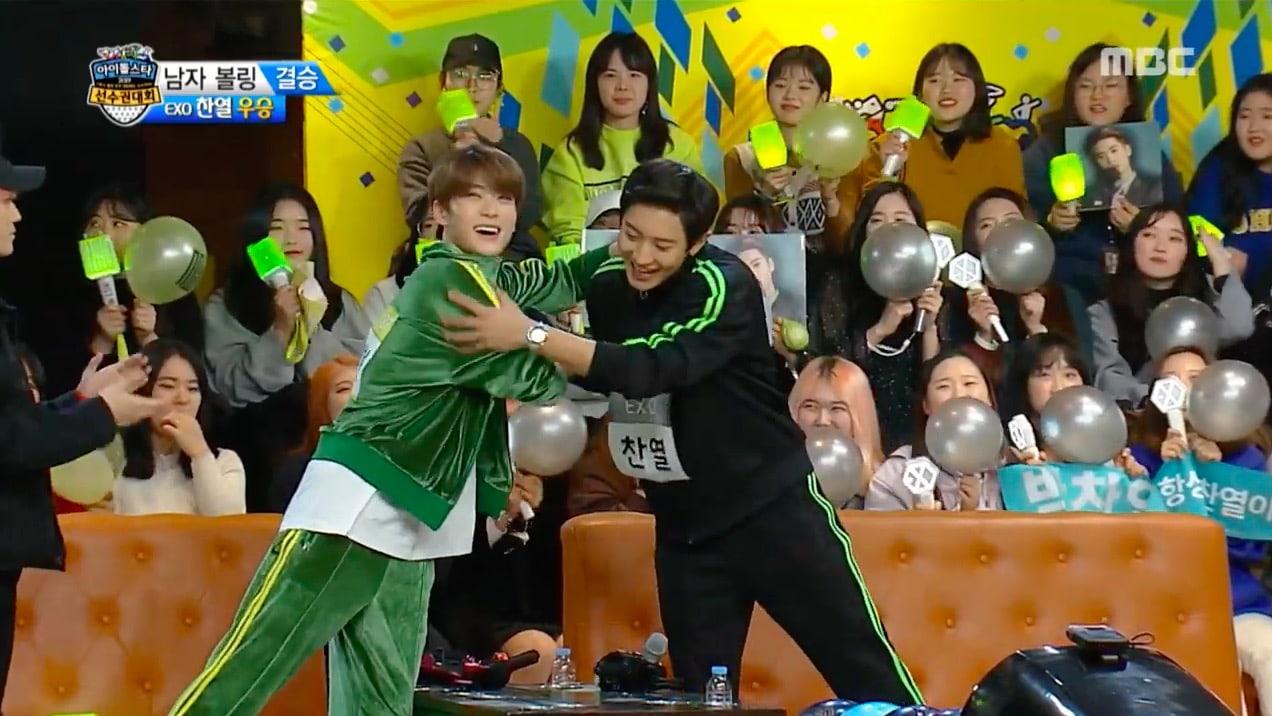 In the finals for archery among female athletes, TWICE’s Dahyun, Chaeyoung, and Tzuyu went up against gugudan’s Kim Sejeong, Kang Mina, and Hana.

After Dahyun and Chaeyoung went head to head with Hana and Kang Mina, gugudan was ahead by 7 points. Tzuyu then scored 10 points four times in a row. However, Kim Sejeong maintained gugudan’s lead by scoring 9, 10, and 10 points. Hana then took the last shot for gugudan, and her 8 points secured them the win. This is the second time in a row that gugudan has won gold in archery at the “Idol Star Athletics Championships”! 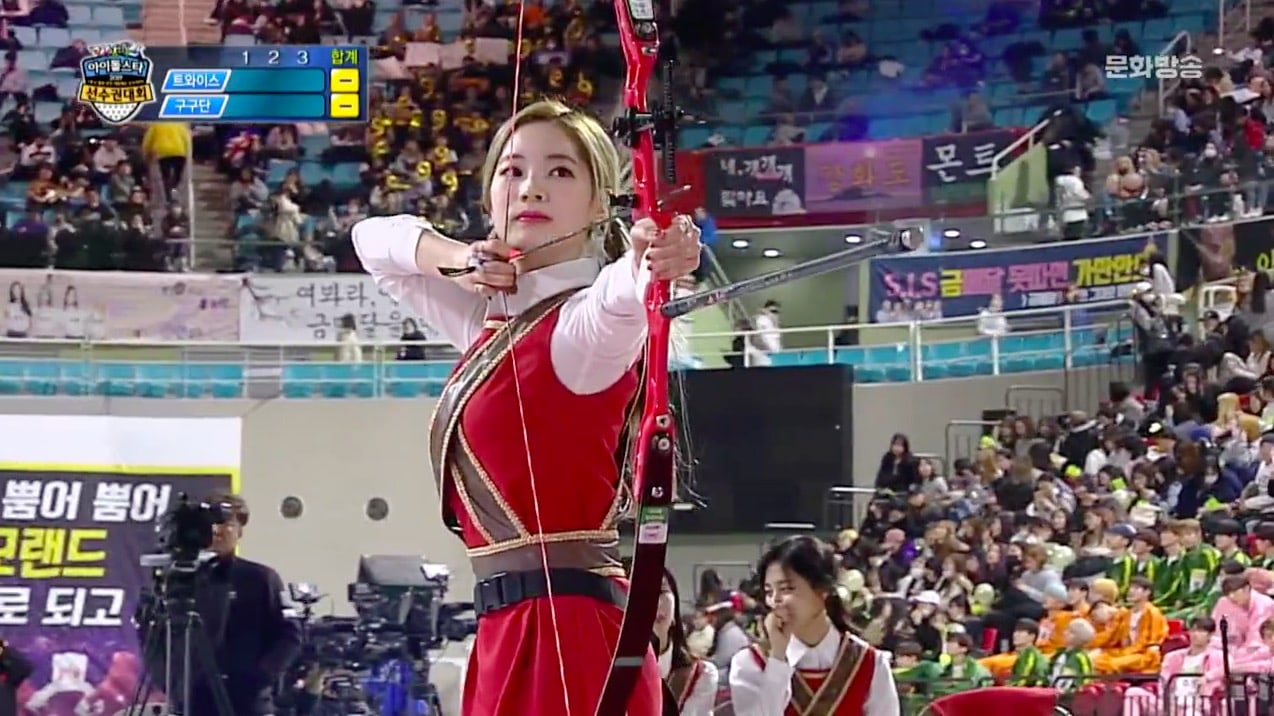 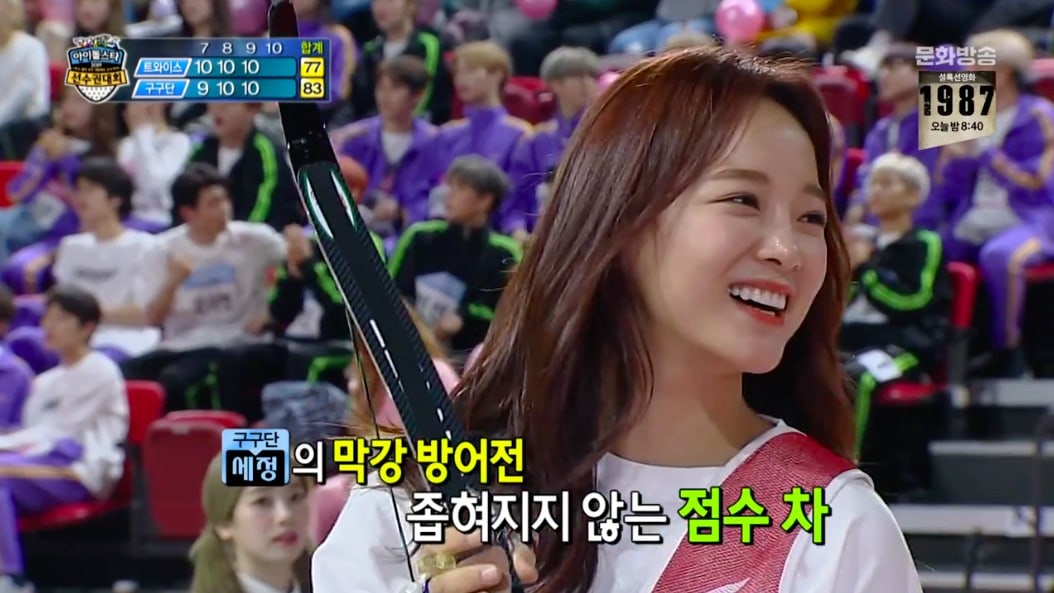 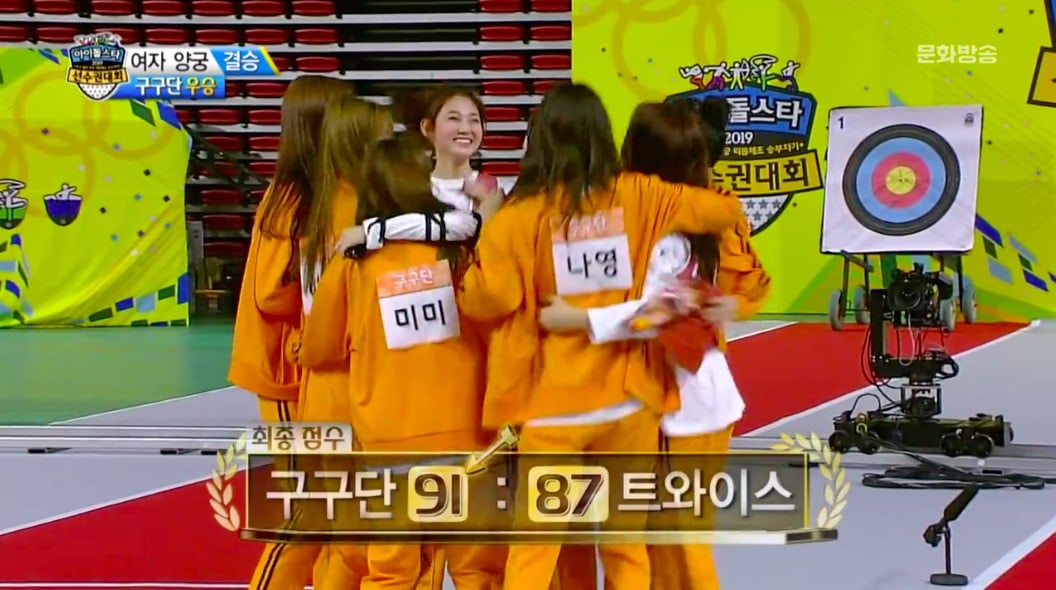 The final athletes were NCT 127’s Taeyong and SEVENTEEN’s DK. The gap between the two teams increased when Taeyong got a 6 point score on one turn and DK achieved 10 points as well as broke the camera within the bullseye of the target. Mark returned to take over for Taeyong, but scored 6 points.

DK then scored another 10 points (with four perfect scores in a row!), and SEVENTEEN took the gold and set a new record with a total score of 95. 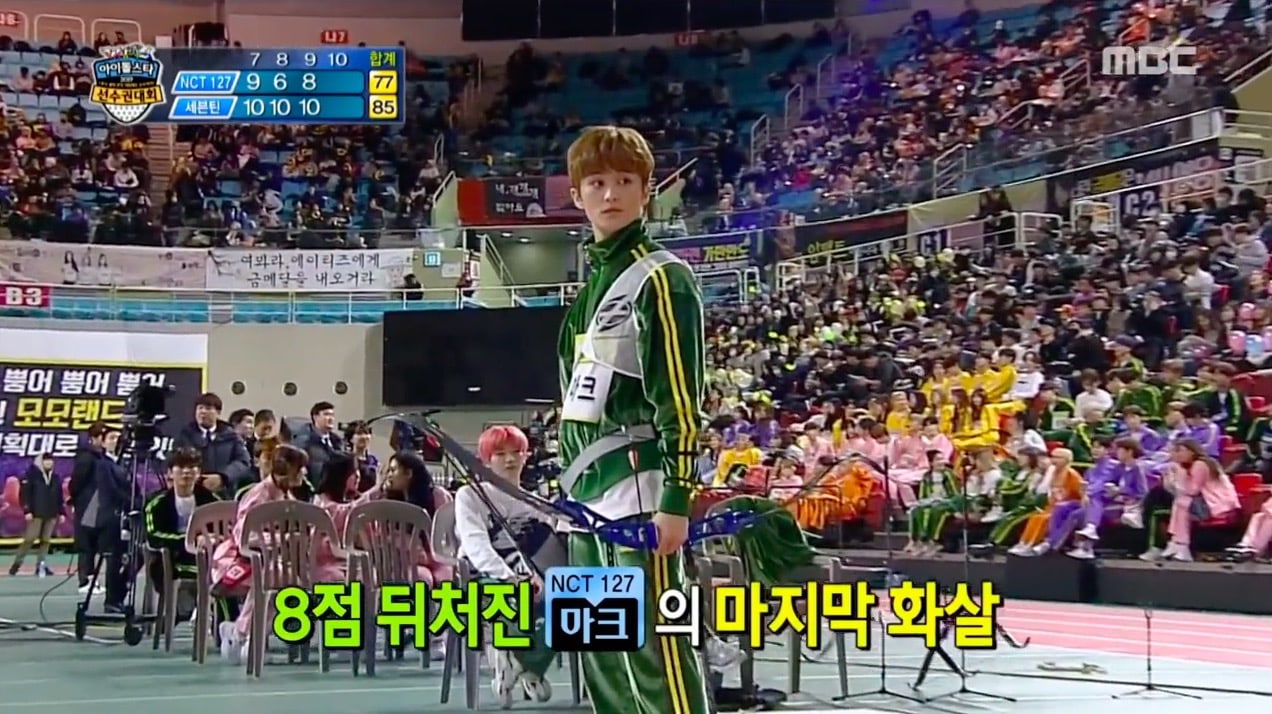 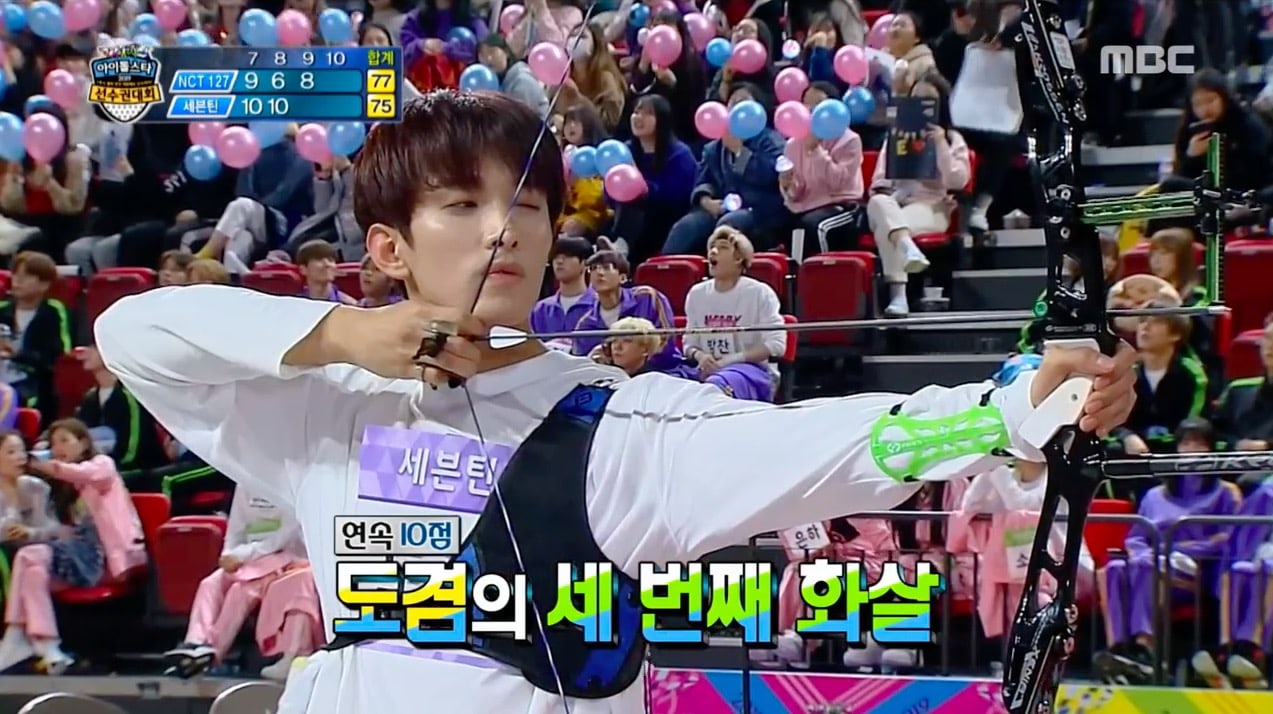 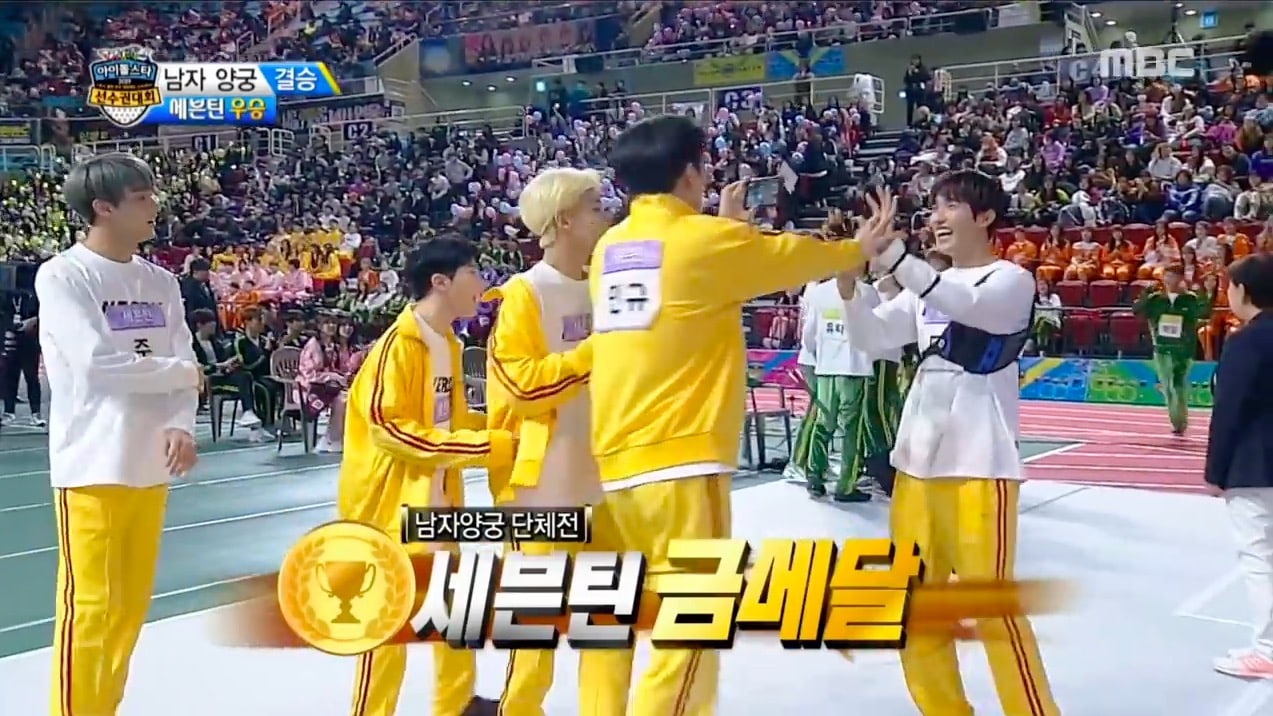 In the 400 meter relay finals for female athletes, the groups taking part were MOMOLAND, WJSN, IZ*ONE, and gugudan. IZ*ONE earned their first gold medal when they came in first! 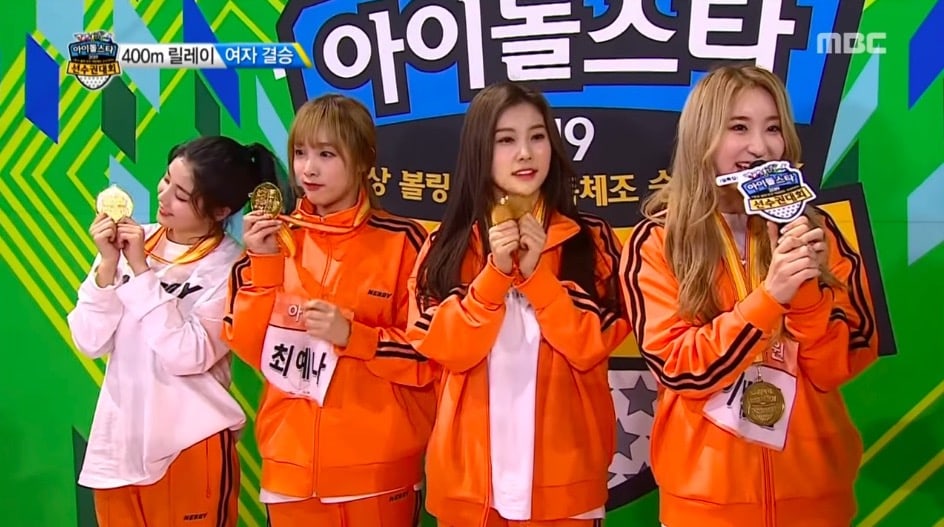 In the relay finals for male athletes, the competitors were ASTRO, Golden Child, Stray Kids, and ONF. ASTRO took the gold!