The story revolves around news anchor Kang Woo Hyun (Lee Seo Jin) who falls into an unknown trap. As the first drama of OCN’s new “Dramatic Cinema” project, it will combine the sharp production level of films and the high quality stories of dramas. It is directed by Park Shin Woo, who previously directed “Into the White Night,” and written by Nam Sang Wook, who previously penned “TEN.” The seven-episode drama will air on Saturdays and Sundays.

Here are three things to look forward to in the upcoming drama:

Lee Seo Jin, who has become familiar to viewers through variety shows, is returning to the small screen after three years with “Trap.” The actor, who will make his first attempt at OCN genre drama, is leading a tense plot by playing the role of Kang Woo Hyun, an anchor in an unknown trap. While filming the drama, he said, “It’s my first time putting on so much fake blood.” With that said, he will be showing relentless action scenes as well dramatic emotional changes throughout the story.

During the press conference, Sung Dong Il had praised, “You will be able to see a side of Lee Seo Jin you haven’t before. It might make you go. ‘Look at him. He’s risking his life.’ It’s not much, but I’ll risk my entire fortune on it. You might think the writer wrote the character thinking of him.”

Sung Dong Il, who has shown a witty and pleasant performance in various works, will also be going through a transformation in “Trap.” He plays the role of veteran detective Ko Dong Guk and shows a serious and cool face in front of the case.

The first drama of the “Dramatic Cinema” project

“Trap,” which was supposed to be a movie, was reborn as the first runner-up of the “Dramatic Cinema” project after coming across OCN. During filming, perfect content was used like a movie set and perfection was enhanced with pre-production of the previous episodes. This reflects the film’s raw material and the crew’s efforts to capture the dense story of the drama.

Also, as director Park Shin Woo and writer Nam Sang Wook have said, “We are watching seven episodes of a drama, but it feels like we are watching a movie that lasts more than 70 minutes each time.” Every episode has a sub-heading and starting with the first episode’s sub-heading “The Hunters,” the viewers will have fun trying to guess the meaning of them.

The actors will express amazing teamwork and chemistry together. Close friends Lee Seo Jin, Yoon Kyung Ho, Sung Dong Il, and Kim Kwang Kyu worked together before. This is why Lee Seo Jin and Sung Dong Il showed their affection for each other during the press conference. The tense atmosphere as well as the plot twists will strengthen the actors’ performances and raise anticipation for the premiere. 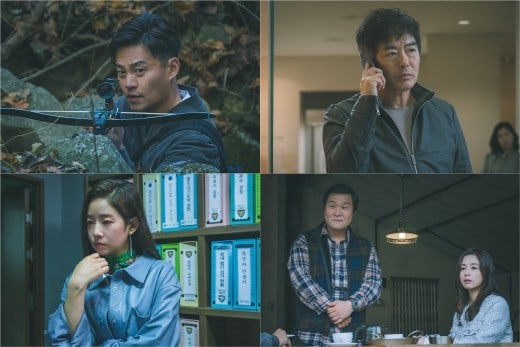