SHINee’s Taemin Talks About Support From EXO’s Kai, BTS’s Jimin, And HOTSHOT’s Ha Sung Woon For His Comeback + What They Do When They Hang Out

SHINee’s Taemin shared some insights into his famous crew of dancer friends!

For his solo comeback with the new mini album “WANT” and the title track of the same name, Taemin recently sat down for a press interview at the SM Cafe. During the interview, he talked about support he’s received for his comeback from friends in his “Friendship Parka” squad, in particular EXO’s Kai, BTS’s Jimin, and HOTSHOT’s Ha Sung Woon.

Taemin said, “Kai gave a compliment by saying that it was much better than the demo.” He added that Jimin always tells him, “You really seem to know something,” seemingly referring to Taemin always knowing the best thing to do.

“Sung Woon always compliments me by saying ‘Hyung, you’re cool,’ and jokes around a lot by calling me a very senior artist,” said Taemin.

Since Taemin is the most senior artist in the friend group as he was the first to debut, he was asked if his friends treat him with respect as a senior artist. Taemin laughed and said, “It would be good if they did, but there’s really nothing like ‘respect’ between us.” He added, “We throw out the idea of our jobs as singers and treat each other as one human to another human. We have a relationship where we just treat each other as younger and older friends. That’s why we don’t talk about work much.”

He added, “Lately we’re all busy so it’s hard to all meet up, but on January 1 we all got together. We tend to all get into the same hobby. If we’re all into playing the game Mafia, then we’ll spend a few hours just playing Mafia. Lately we’re learning card games, and when we get together we play card games.”

On February 11, Ha Sung Woon showed his support for Taemin on his Instagram story by posting a screen recording of himself streaming “WANT.” He wrote on it, “Hyung is so cool.” 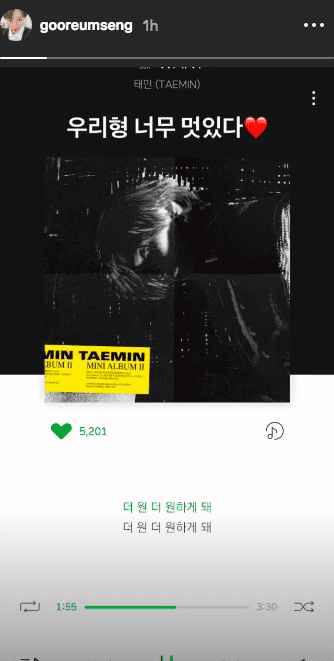