February 13, BIGBANG’s Seungri spoke to media in response to a photo that has been circulating online of him and a woman at the club Burning Sun.

The woman, according to reports, is Chinese, goes by the nickname “Anna,” and is currently under suspicion of dealing drugs at Burning Sun while working there as an MD. The photo in question is from the woman’s social media, which she posted in October 2018 with the caption, “You have to work hard if you want a photo with CEO Seungri. Doing a lot after getting drunk this week.” 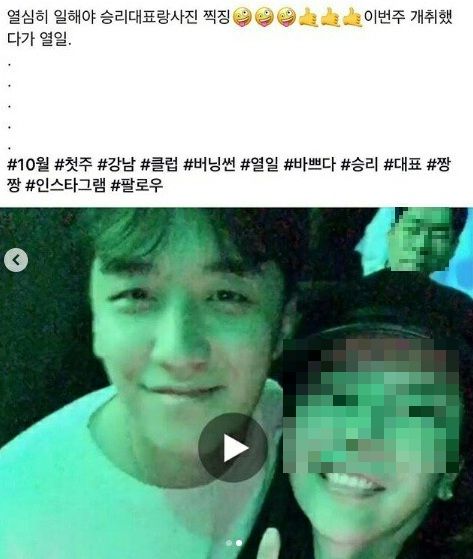 In response to the photo, Seungri said he does not know who the woman is. “I was at the club and she asked me for a photo, so I agreed. I don’t remember when we took the photo or who she is.” Seungri added, “There are countless photos of me and fans on the internet, on social media, and in online communities. When I’m at the club, there are a lot of people that approach me and ask for a photo, and I usually accept.”

Meanwhile, police have stated that they are planning to investigate Anna, but are currently unable to reach her. She faced a charge involving marijuana last year, but received a suspension of indictment. If she is still in Korea, reports say she is in the country illegally, as her passport has expired.

Reports also revealed that Anna is one of the two women who sued Kim Sang Kyo for sexual harassment. Kim Sang Kyo is the Mr. Kim in question who first put Burning Sun in the public eye with his accusations of assault last month. Suspicions quickly followed regarding alleged backroom dealings with the police and tolerance of sexual assault and drug use at the club, all of which were wholly denied in both a statement by Burning Sun and the club CEO, Lee Moon Ho.

And despite statements from Seungri and the CEO stating that Seungri never had a hand in operations or management of the club, the BIGBANG member likewise has been unable to shake public scrutiny with regards to the recent controversies.

BIGBANG
Seungri
XPN
Burning Sun
How does this article make you feel?