With a full house, all hands were busy, so Son Ho Jun called up Nam Joo Hyuk for an emergency bread delivery. As soon as Nam Joo Hyuk arrived, Son Ho Jun thrust a coffee grinder into his hands and put him to work, while Baek Jong Won commented, surprised, “Oh, you’re a celebrity! I was just thinking that you were really good-looking.” In the end, Nam Joo Hyuk got pulled behind the counter and got sent to the sink to do dishes. 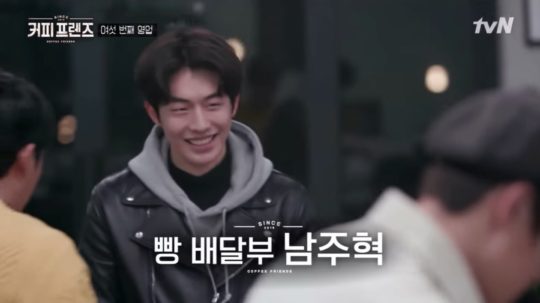 When the others asked Yoo Yeon Seok how he knows an idol, he said, “A lot of people have said that we look a like, and we became close. We also did a variety show together.”

Son Ho Jun said TVXQ’s Yunho kept calling to ask them to take good care of Sehun. The EXO member said, “He told me it was going to be a lot of work. He said I just have to peel some oranges and do some dishes.” Yoo Yeon Seok and Choi Ji Woo said, laughing, “It’s not just ‘some.'”

Eventually, after a long stint with oranges, Choi Ji Woo tried to give Sehun a reprieve, asking Yoo Yeon Seok to give him a break, but Yoo Yeon Seok just said he would have to go out again to pick more.

Later, after the cafe opened for the day, Sehun said, throwing back an iced drink, “This is legit. I know why Yunho hyung said that now.” 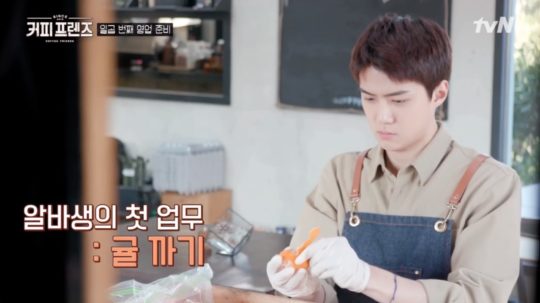