Rain showed off his moves on JTBC’s “Ask Us Anything”!

On the February 16 broadcast, Rain and Lee Beom Soo appeared as guests to promote their upcoming film “Uhm Bok-dong.”

Speaking about his role model, Rain said, “I really liked Lee Sang Min, but it was all about Deux when I was young. Kim Sung Jae was amazing. I still remember his solo stage during ‘As I Told You’ (literal title).”

He continued, “When it came to hip hop, Yang Hyun Suk was untouchable. It’s a different style from Park Jin Young‘s. Yang Hyun Suk has a traditional hip hop style and Park Jin Young has a soul dance style like MC Hammer. After I learned hip hop and Park Jin Young’s soul dance, I could dance to everything.” Super Junior’s Kim Heechul commented, “Can you also include SM’s Lee Soo Man? Include our agency too,” and began singing Lee Soo Man’s “Happiness” (literal title).

Rain then danced to “Come Back Home” by Seo Taiji and Boys, the group Yang Hyun Suk used to be a part of, and also showed his rendition of Park Jin Young’s “I Have A Girlfriend” where he put his own twist on JYP Entertainment founder’s moves. 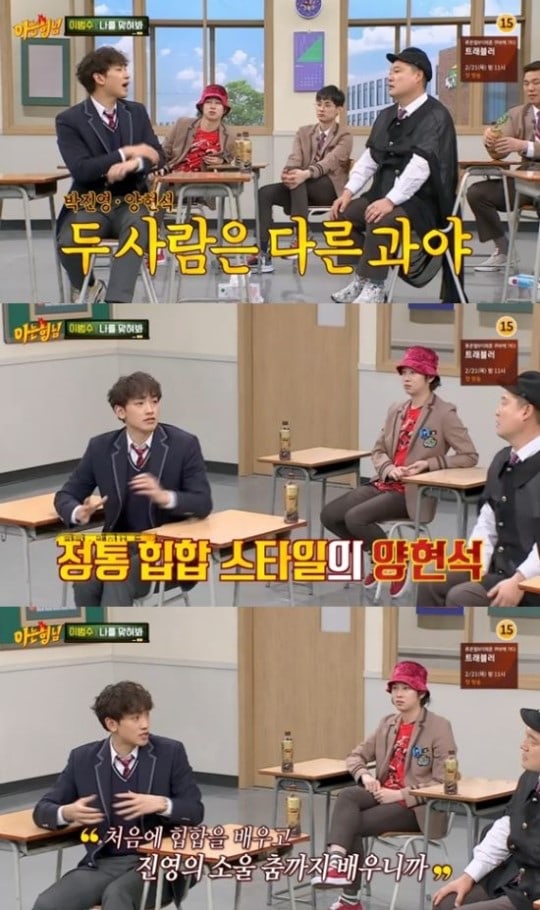 “Ask Us Anything” airs on Saturdays at 9 p.m. KST. Check out clips of Rain dancing below!

Knowing Bros
Rain
How does this article make you feel?