On the February 17 broadcast, Kim Jong Kook, HaHa, Song Ji Hyo, and Yang Se Chan competed together as a team in a race.

The team first went to a pig feet restaurant where HaHa and Yang Se Chan enjoyed a meal as Song Ji Hyo and Kim Jong Kook munched on side dishes. Offering them a lettuce wrap, HaHa said that they could eat this if they intertwined their fingers with one hand and played rock, paper, scissors with the other.

This team then picked the “friend chance” and tried to arrange an impromptu meetup with a celebrity friend. While scrolling through his contacts, Yang Se Chan came upon Hong Jin Young’s name and called her. He explained that he had the “friend chance” and was hoping to see her if she was in Gangnam. Hong Jin Young revealed that she was filming an ad nearby and Yang Se Chan asked for about 10 to 15 minutes of her time. The singer happily agreed and told them to come to the set.

Hong Jin Young joyfully greeted the members once they arrived onto the set. Song Ji Hyo and Hong Jin Young, who are best friends in real life, stood next to each other and showed how close they were. HaHa made everyone burst into laughter by commenting, “This is like a U.S. sitcom. ‘My Ugly Duckling‘ and ‘Running Man’ love lines are all here, and the two of them are close. This is America!”

The team later headed to a Pyongyang cold noodle restaurant where HaHa suggested that they play a game in pairs to see who will be able to eat and who won’t. They asked the restaurant employee to select two colors, and he chose HaHa and Yang Se Chan’s. As a result, Kim Jong Kook and Song Ji Hyo shared a bowl of Pyongyang cold noodles. Putting his envy aside, HaHa joked, “But it’s good to see you guys sharing a dish like this.” 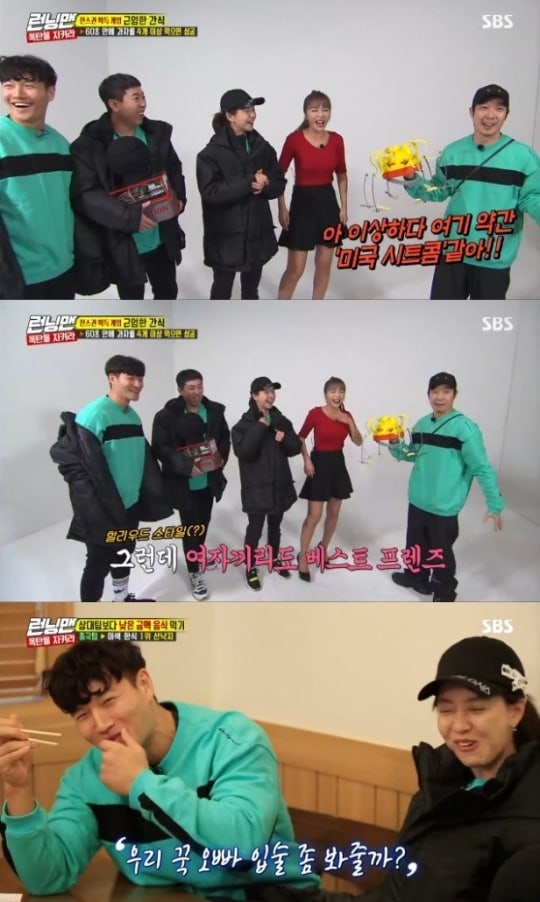 Hong Jin Young
How does this article make you feel?