MONSTA X Gets Seriously Competitive Over Food On “Idol Room”

On February 19, MONSTA X guested on JTBC’s “Idol Room,” showing off their diverse charms, including their voracious appetite!

MCs Jung Hyung Don and Defconn introduced MONSTA X as “Waka Waka Senpai,” which is a slight variation in pronunciation to the opening lyrics “Walker walker” from their song “Shoot Out” combined with the Japanese word for upperclassman or senior. As a whole, the meaning translates to “young senior” in Japanese, which seems fitting for their youthful image. The members finished their introduction by saying a word to their Japanese fans while doing the “Manner Mode” dance, which is the name of their choreography where they make their entire body shake.

For the “Fact Check” corner, Jung Hyung Don revealed that MONSTA X is divided into cute members, which consist of Joohoney, Hyungwon, and I.M, and sexy members, which are Shownu, Wonho, Minhyuk, and Kihyun. After MONSTA X shared that they didn’t know about this, Jung Hyung Don expressed his surprise as well, adding that he thought Minhyuk and Kihyun belonged in the cute category. 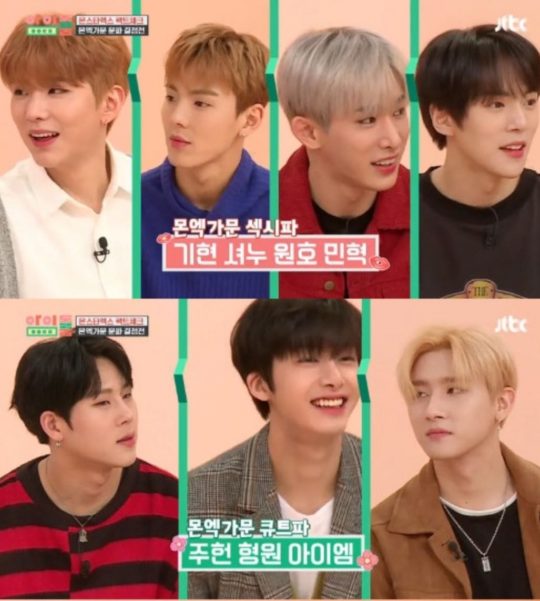 To finally decide once and for all who belongs in which category, each of the members danced to one cute song and one sexy song. Eventually, Joohoney and Minhyuk were categorized as “No category,” Hyungwon as “Club Category,” Wonho as the “Cute category,” I.M as “No effort category,” Kihyun as the “Mood breaker,” and Shownu as the only member of the “Sexy category.” 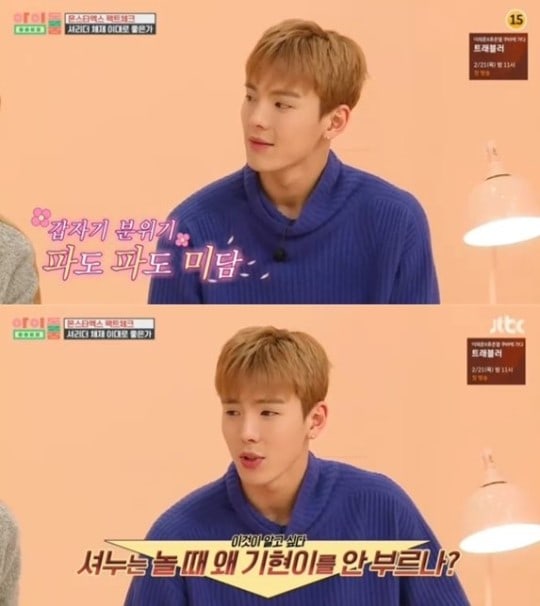 The members also delved into Shownu’s impressive leadership skills. Joohoney expressed his satisfaction with Shownu, sharing that he’s is a leader who doesn’t nag a lot. The members also called him the best leader, adding that while Shownu lets them do their own thing, he still cares about them. When he filmed a cosmetics commercial on his own, he still shared the profits evenly with all the members, saying that his success was due to all the members’ hard work.

Shocking the MCs, MONSTA X also shared for their next “Fact check” that their food expenses ranged from 20 to 30 million won (approximately $17,800 to $26,700) per month. The members revealed that Shownu was most likely to get hangry, explaining that he gets sensitive when he hasn’t eaten.

Wonho was chosen as the biggest eater as he never really felt full, while Hyungwon was chosen as the member who feels full even at the smell of food. Minhyuk explained, “Hyungwon is 10 percent [full] when he orders the food, 20 percent more full when when the food arrives, and 30 percent more full when he smells the food,” meaning that he eventually only has 30 percent left to fill by actually eating. Wonho and Shownu also added that they enjoy eating with Hyungwon because they get to steal some of his food.

To prove that most of the members were in fact big eaters, MONSTA X participated in the “Toast Ang (sound that’s made when biting toast)” challenge to eat the food provided for them at the studio. For the mission, members had to pop up a piece of bread from the toaster and bite on to it in midair. However, the mission proved to be surprisingly difficult, making the studio burst out laughing from their continuous failed attempts. The members also expressed their frustration by yelling out loud and wanting to beat up the piece of toast. Eventually, Minhyuk, Shownu, and Wonho emerged as victorious.

MONSTA X
Idol Room
How does this article make you feel?