“Big Issue” is about a homeless alcoholic who turns his life around and becomes an elite photojournalist in order to save his daughter, and a heartless editor-in-chief who uses her connections to reveal celebrity scandals.

The police suddenly infiltrates the underground passageway, which is a haven for homeless people, making the homeless people who were resting there start running away. Han Suk Joo was sleeping in a big box to shield himself from the cold, Doo Chul was cleaning his treasured saxophone, and Dr. Go was reading under a blanket until the police suddenly disrupted their peaceful lives.

This scene was filmed on January 22 on a highway in Gyeonggi Province. Despite the bitterly cold wind blowing through the passageway, the three actors tried their best to naturally portray homeless people in their positions during rehearsals before acting in front of the rolling cameras.

The staff praised the actors for the synchronization with their characters by saying, “You guys look so natural. Do you guys happen to have experience being homeless?” Their amazing acting continued in the scene where they flee as the police suddenly arrives.

A source from the drama said, “During the time of filming, Joo Jin Mo, Song Kyung Chul, and Oh Kwang Rok showed their passion by lying on the floor and running in the cold weather. Please look forward to how Han Suk Joo, who became homeless after losing everything, meets the mysterious Doo Chul and Dr. Go and the fun story they will tell.” 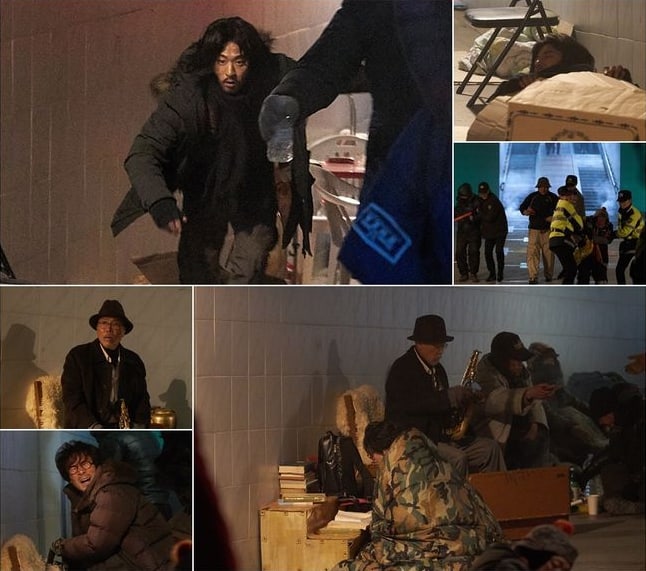 “Big Issue” will be directed by Lee Dong Hoon of “God’s Gift: 14 Days“ and written by Jang Hyuk Rin of “The Gang Doctor.” The drama will premiere as the follow-up to “The Last Empress” on March 6 at 10 p.m. KST and will be available on Viki! In the meantime, check out the trailer with English subtitles below: