SEVENTEEN’s Manager Talks About Most Reliable Member, If He’s Ever Regretted His Job, And More

One of SEVENTEEN’s manager’s appeared on MBC’s “The Manager” and opened up about which members he trusts and mosts and least, as well as whether he’s ever regretted becoming a manager.

The episode of “The Manager” that aired on February 23 featured a segment following the hectic lives of SEVENTEEN and their three managers. Because the group has 13 members, the manager explained that the team will usually have three managers, sometimes two, taking care of them. Clips from SEVENTEEN’s morning routine were shown, showing how all thirteen members run around each other to get ready for their day, with multiple members having to use the bathroom at the same time to get everyone out on time.

When asked which member makes him most nervous, the manager chose Mingyu and said, “He’s always sleeping somewhere and if you can’t see him, that means something is up.” But then he added, “At first, he’d make me really nervous but he’s good at waking himself up and appearing when he needs to.” The manager then picked Seungkwan as the member he trusts the most, explaining that Seungkwan will often help the managers out by taking all the opinions of the members and coming up with a plan. 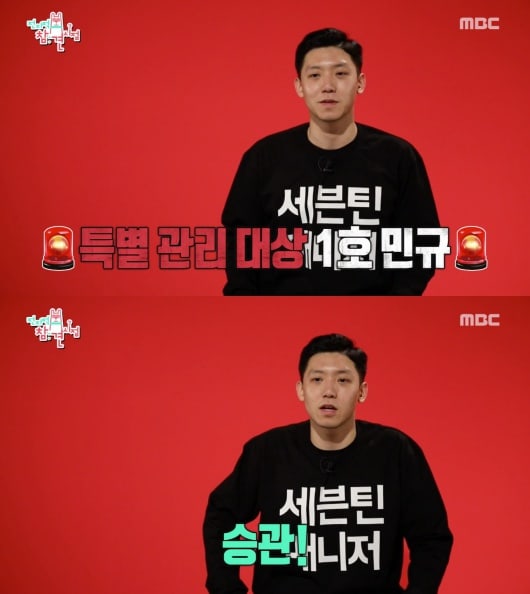 With how many members there are, the manager explained that they have a number system where each member has a number according to their age. He said that in situations that require quick action, he’ll ask the members to number themselves and he uses that system to check who’s absent. They even use the numbers to get SEVENTEEN moving to different locations as they have to split up the group when they take the elevator.

The manager was asked if he ever regretted becoming a manager and he candidly replied, “When they’re in their promotional period, I feel regret every morning when I open my eyes, but then I’ll meet the members and I forget about it. It’s an honor to have met SEVENTEEN as my artists, and I’m grateful because they all welcomed me.” He joked, “But I still get nervous when I can’t see them so I wish they wouldn’t disappear from my sight.” 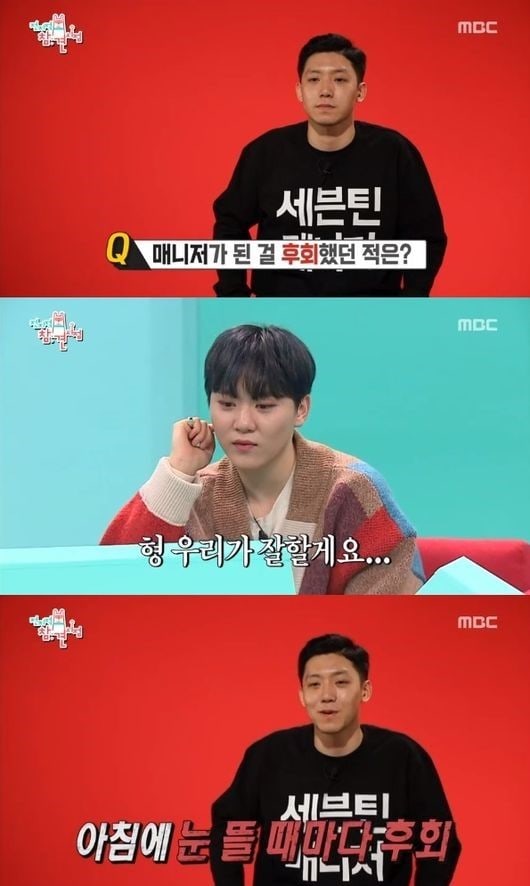 Seungkwan expressed concern that their busy schedule was causing harm to their managers’ health as he said, “We’re always sorry to our managers, and it’s not easy to get up in the morning. They sleep at 1 a.m. and wake up at 5 a.m., and that’s almost every day of the week so I worry about their health.” He explained that the job was difficult, to the point that SEVENTEEN has had 15 different people in the new manager position since their debut, with six months being the longest anyone has lasted.

He added, “I jokingly once told our new manager that I hope he lasts until the end of our current promotions, but I’d be grateful if he stayed with us much longer. I’d like for us to go out to eat something delicious after our promotions are over.” Mingyu also joked, “I think I’ll sleep right in front of our manager from now on,” before saying, “He’s worked so hard, and I just want to say thank you and I love you.” 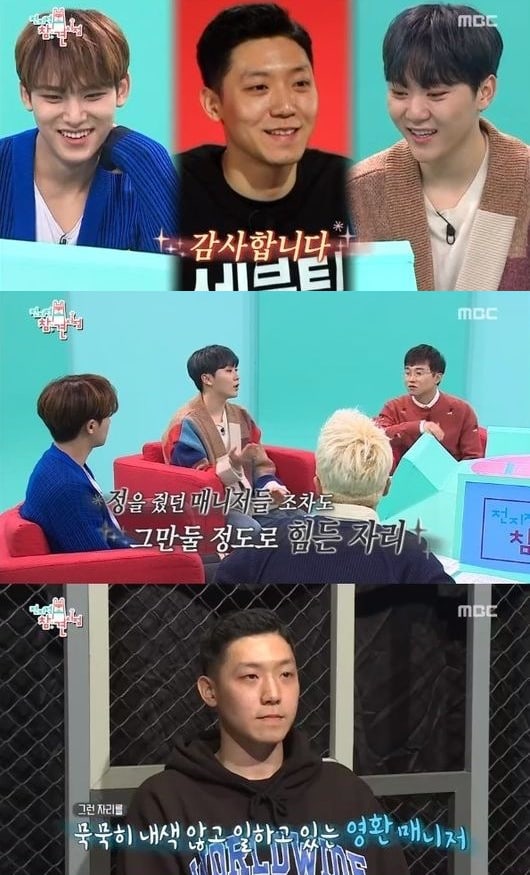 Watch SEVENTEEN’s appearance in the latest episode of “The Manager” below!

SEVENTEEN
The Manager
How does this article make you feel?