SEVENTEEN’s Mingyu and Jeonghan transformed into caring uncles for Sua and Suji.

On the February 24 broadcast of tvN’s “Kidtuber TV,” the two idols became uncles and spent time with the young internet stars. Sua and Suji are famous for their YouTube channel where they currently have more than 500,000 subscribers and have previously appeared on MBC’s “Unexpected Q” where they provided a clue on the music variety show.

Mingyu and Jeonghan began, “We’ve been fans. Seungkwan likes them, so we also became fans. They are our online nieces. We’re really nervous we’re getting to meet them.” When they arrived at Sua and Suji’s house, the two idols put on cute rabbit hats and tried to bond with their “nieces.” Bringing up Sua and Suji’s cover of SEVENTEEN’s “Oh My!” Jeonghan asked, “Do you remember when you did this dance? I’m the person who did that.” After the girls introduced themselves, Jeonghan said, “I’m angel uncle Jeonghan who does ‘Oh My!’ I have wings back here. I can’t fly away right now so I’ll show you next time.” Mingyu added, “I’m the tall uncle who does ‘Oh My!'”

The four of them headed to the girls’ playroom and the MCs were impressed at how well Jeonghan got along with the kids. He explained, “I thought that I should go along with them to quickly get close with them,” and Mingyu praised his fellow member. Jeonghan and Mingyu remembered being told that the girls enjoy playing animal quiz games where they have to guess the animal after hearing the description. When it was time to split up into teams, both Sua and Suji wanted to team up with Jeonghan. Sua later sat next to Mingyu and they began asking and solving animal questions. 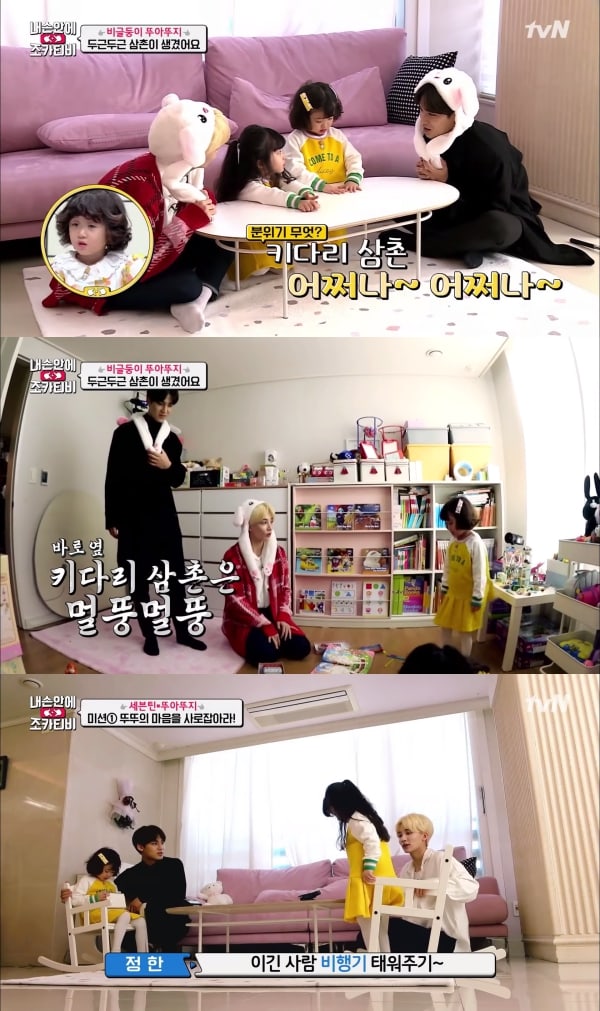 Mingyu and Jeonghan asked the girls if they were hungry and decided to make them rice cake snacks. They gave Sua and Suji a mission to buy rice cakes, fish cakes, and black soybean paste at the market. The girls were successful at buying all of the ingredients except the black soybean paste, so Mingyu made rice cake snacks with tomato sauce instead. Mingyu also announced that he had changed his name to “Handsome Uncle” instead.

After enjoying the snack, the four of them created a parody of JTBC’s “SKY Castle.” Mingyu turned into Kang Joon Sang, Jeonghan into Han Seo Jin, Sua into Kim Joo Young, and Suji became Kang Ye Seo. They showed off their adorable yet impressive transformations and wowed everyone in the studio. 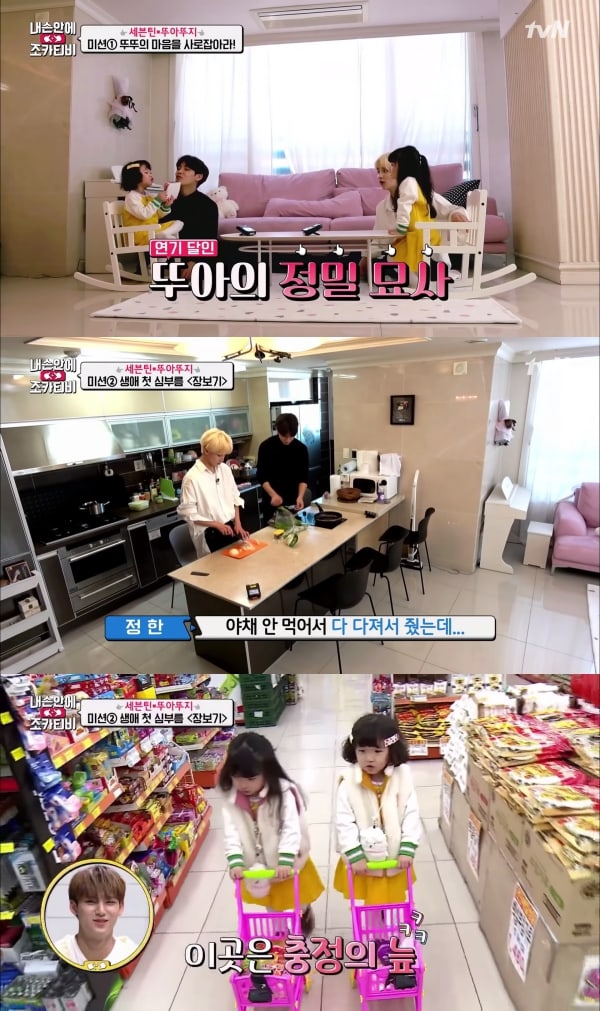 “Kidtuber TV” airs on Sundays at 4:45 p.m. KST. Check out Mingyu, Jeonghan, Sua, and Suji’s parody of “SKY Castle” below!