GOT7’s Jinyoung and Shin Ye Eun revealed their first impressions of each other!

“He Is Psychometric” is about a boy named Ian (Jinyoung), who is able to read a person’s secrets through physical contact, and a girl named Yoon Jae In (Shin Ye Eun), who harbors a closely-guarded secret.

Although Ian enjoys showing off, his beginner-level superpowers end up entangling him into various incidents. Yoon Jae In, on the other hand, is highly intelligent and has excellent reasoning powers. She will serve as a ray of light to Ian, a loose cannon, and his investigative journal as a reliable problem-solver, and the two will provide much laughter to viewers with their unique relationship.

As Yoon Jae In takes special measures to train the clumsy psychometrist Ian, fans are curious to see the investigations the two characters will conduct amid the suspense and tension-filled incidents. 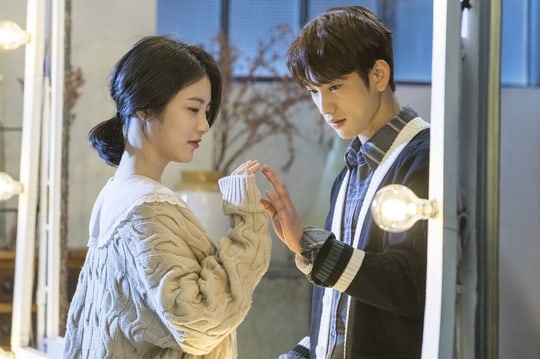 Jinyoung remarked, “When I first met Shin Ye Eun, she was very similar to the Yoon Jae In that I had imagined, so I was surprised. While acting and working together, we naturally became friendly and we’re continuing to enjoy filming together.”

Shin Ye Eun commented, “When we first met and practiced our script, we really just read lines and talked about the drama for five hours. It’s my first television drama so I’m still awkward and have difficulties. Whenever I was like that, however, [Jinyoung] would be my side and help me, so I’m really grateful.”

“He is Psychometric” is set to premiere on March 4 at 9:30 p.m. KST following the conclusion of “The Crowned Clown.”

GOT7
Jinyoung (GOT7)
Shin Ye Eun
He is Psychometric
How does this article make you feel?