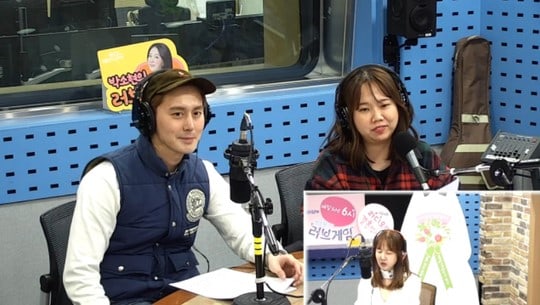 Kim Sang Hyuk had announced last week that he was getting married to his girlfriend, six years his junior, on April 7.

When asked how he had made the decision on getting married, Kim Sang Hyuk said, “We would often fight over small things and break up, but I’d always go back to her in the end. I knew I couldn’t live without her so we decided to get married. I always return to her side as if I was born to be there.”

He then sang the praises of his wife-to-be, sharing, “She cooks so well. She always makes me amazing food. And in my eyes she’s so pretty.”

Radio show host Park So Hyun added, “I saw a photo of her and she looks like WJSN’s Eunseo.”

Later on the radio show, Kim Sang Hyuk sent a message to his fiancée saying, “Let’s not fight and live for a long time together in happiness and health. I will always stay by your side, I love you.”

He also talked about the meaningful way he proposed. “We both like camping so we had a good time and then I proposed. There’s a ring that I’ve been wearing for a long time. It belonged to my grandmother, who has passed away, and it’s about 100 years old. I gave it to her and said, “This is my treasure but I want you to wear it for the rest of your life. I’ll entrust the next 100 years to you.”

Click-B
Kim Sang Hyuk
XPN
How does this article make you feel?