Joo Ji Hoon sat down for an interview on the February 25 episode of MBC’s “Section TV” along with his “The Item” co-stars Jin Se Yeon, Kim Kang Woo, and Kim Yoo Ri.

Joo Ji Hoon talked about why the CGI scenes in “The Item” are harder than those in “Along with the Gods.” He explained, “Since ‘Along with the Gods’ was set in a virtual space called the underworld, there was relatively a high degree of freedom in acting. But ‘The Item’ is a work that expresses the story of the existing world, so it’s more difficult to act.” Jin Se Yeon commented, “I could see his familiarity with CGI acting.”

It is Joo Ji Hoon and Kim Kang Woo’s second time acting together as well. They had appeared in the 2015 movie “The Treacherous” together. Kim Kang Woo said, “At that time, I was the king and he was a vassal, so I only saw his palanquin. I had no idea he was this tall.” Joo Ji Hoon commented, “This time, I can act while making eye-contact with my beloved friend Kang Woo, so I’m happy. Just like he did in ‘The Treacherous’, he plays a mad character in ‘The Item’, and I was amazed after I saw him acting with such detail.”

Joo Ji Hoon’s popular MBC drama “Goong” was also mentioned, and he shared, “MBC is a warm and grateful place to me.” 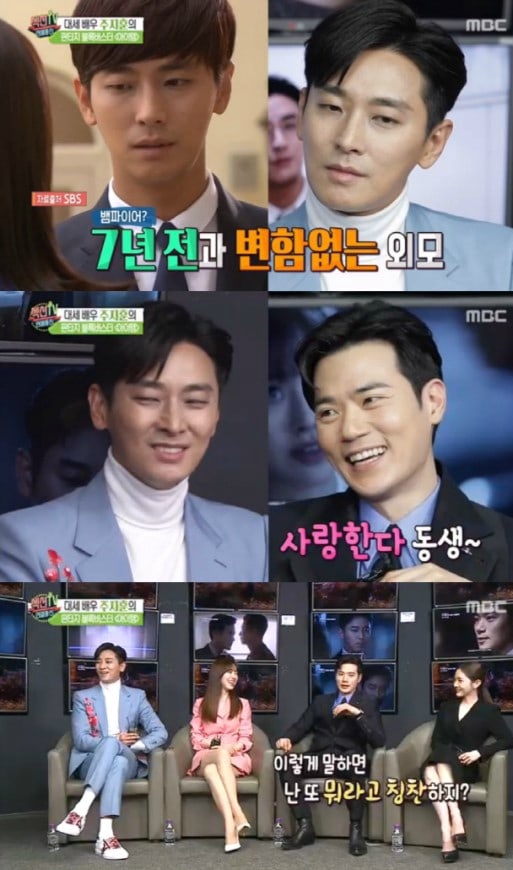 If you haven’t already, check out the latest episode of “The Item” below!

Joo Ji Hoon
Section TV
Along with the Gods
The Item
How does this article make you feel?