For the 14th year, Soompi is honoring the best in Korean music and television, as chosen by international fans. Last year, the awards received more than 163 million votes from fans in over 190 countries, truly celebrating the global reach of K-pop and K-drama that continues to grow even today.

Search “Soompi” in the Google Play or App Store to download the Soompi App to vote!

SF9, the nine-member boy group that is set to conquer the global stage this year, is our special MC for 14th Annual Soompi Awards so keep an eye out on our official channels on Facebook, Twitter, and Youtube to live out the awards experience with them.

Soompi is also, once again, joining forces with Twitter, which recently announced that there were over 5.3 billion tweets about K-pop last year. The conversation keeps growing this year with #SoompiAwards, and every time you use the hashtag, you will be able to see the official Soompi Awards logo.

The nominees for the K-pop Awards are chosen from our Soompi Music Chart, a chart that takes into account the artists’ achievements on the top charts in Korea and their popularity on Soompi itself. The nominees in the K-drama Awards represent the best of dramas, variety shows, and actors in Korean TV in 2018 and are curated based on viewership in Korea, as well as popularity on Soompi. 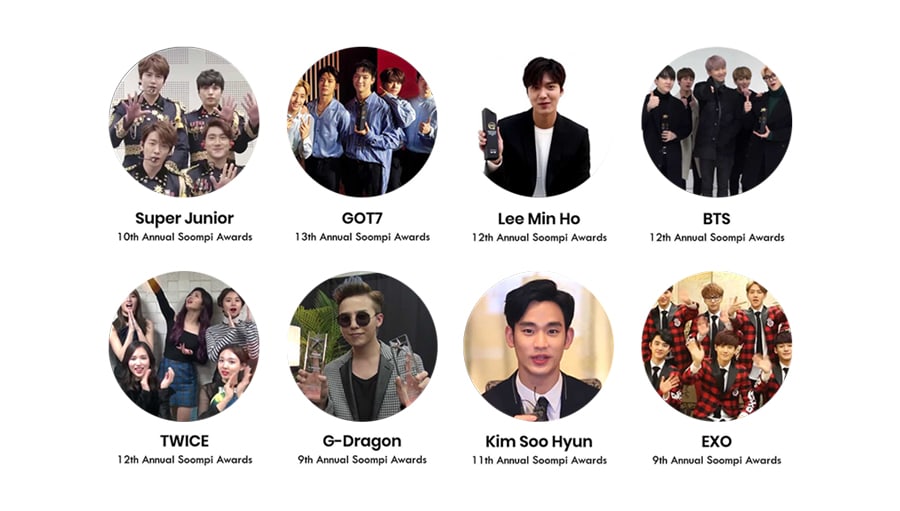 Want your favorites to receive a trophy and thank you for your hard work? Vote now! The 14th Annual Soompi Awards will run from February 27 to March 27.

Soompi Awards trophies spotted in various broadcast by YG Entertainment, GOT7, and BTS.

What is the voting period?

How do I vote?

Here’s where it differs from last year: voting for the 14th Annual Soompi Awards for all categories (with the exception of “Twitter Best Fandom”) will only be accessible through the Soompi App. (Make sure you have the latest version of the app!) Our goal this year is to ensure a fair voting process for all of the amazing nominees in the awards, and having the voting take place in the Soompi App will help us protect the integrity of the voting process.

You can use the buttons below to download the Soompi App, or search “Soompi” on the Google Play or App Store.

Votes are limited to ONCE per category per day. Winners are determined based on the cumulation of app votes and Soompi Music Chart scores where applicable.

Soompi has put into place several systems in place to detect suspicious votes and voting activities through the Soompi App. Votes and voting activities that appear to be intended to game the system or come from suspicious accounts will be automatically disqualified. Suspicious accounts include ones that use bots, scripts, issue repetitive automatic votes or appear to have been created specifically to abuse voting.

What are the eligibility requirements?