Yoon Ji Sung Talks About His Favorite Recipes, Resemblance to Kwanghee, And More

On February 27, Yoon Ji Sung appeared on “Weekly Idol” to talk about his solo debut, his time with Wanna One, and more.

On the show, Jo Se Ho commented, “There are a lot of people who compare you to Kwanghee. How do you feel about this?”

Yoon Ji Sung shared, “I heard that a lot when he was away doing his military service. If there’s someone who leaves, there should be someone who comes in. I tried to fill in his shoes but I wasn’t able to.” He added playfully, “I want to do something even now. If there’s a time when Kwanghee is absent as the MC, please call me right away. I have a lot of free time. I don’t have much to do.” 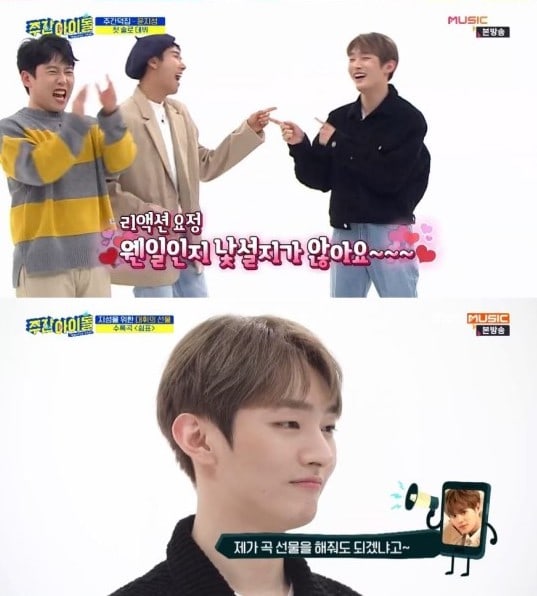 The hosts also prepared a phone call with Lee Dae Hwi, who composed one of the songs on Yoon Ji Sung’s solo album. Lee Dae Hwi shared that the reason he’d given Yoon Ji Sung one of his songs was because he really liked his voice. The two former Wanna One members then cheered each other on and Lee Dae Hwi promised he would make his debut soon, though the exact date was still a secret.

Yoon Ji Sung further shared that he had been living in a goshiwon since he was 16. A goshiwon is a small room, furnished only with a desk and a bed and with communal bathroom and kitchen areas, that students rent to focus on their studies.

“I’m usually an expert at frozen food,” he admitted, “but there are times when I crave my mother’s homemade food. There’s a recipe that my mom taught me. It involves white kimchi because I can’t eat spicy food.” He then shared his recipe for stir-fried white kimchi and pollack roe and showed off his cooking skills.

Yoon Ji Sung made his solo debut with the album “Aside” and title track “In the Rain” on February 20.