On the February 27 broadcast of KBS2’s “Mr. House Husband,” FTISLAND’s Minhwan and Yulhee were visited by Minhwan’s mother and younger sister.

At first, Minhwan seemed excited to see her younger sister as he said, “Even when Yulhee and I were just dating, Yulhee and my sister got along very well like real sisters.”

Little did Minhwan know, as soon as his mother and sister arrived at the couple’s house, they ganged up on him with Yulhee. They scolded him on how he needs to help Yulhee more with housekeeping. 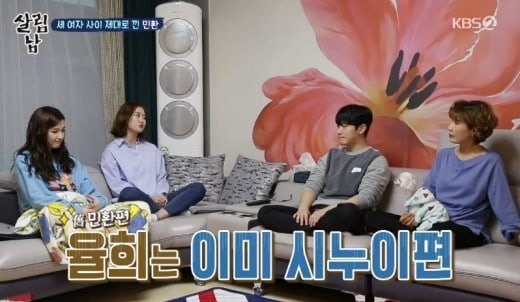 Minhwan’s sister started by saying, “You need to improve your housekeeping skills and look after Jjangi (the nickname of Minhwan and Yulhee’s baby) better, so that Yulhee has more free time.”

The FTISLAND member refuted the claims and argued that he does his best to help. However, Yulhee revealed his true nature by saying, “He only helps me because I ask him to. He still can’t even hang laundry on a drying rack properly.”

Backing up Yulhee, Minhwan’s sister said, “You took away Yulhee at such a young age, but you still do everything you want to?” Minhwan’s mother added, “If you keep doing that, Yulhee might run away.”

Yulhee gave a final blow by advising his sister, “Don’t get married at a young age.” Afterwards, the three women went outside to have fun while Minhwan was left alone at home to take care of the baby. 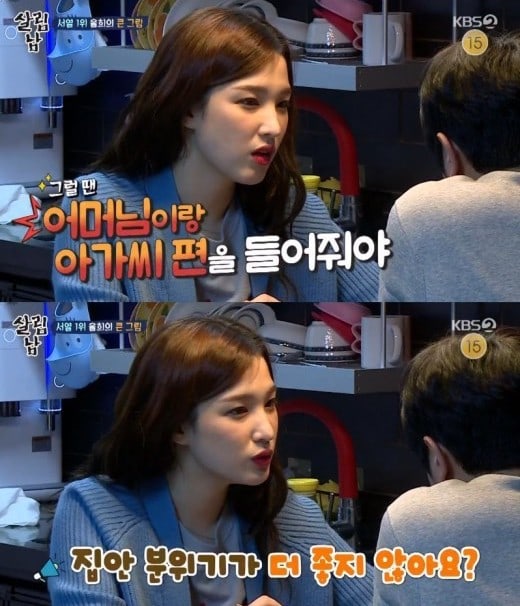 After Minhwan’s mother and sister left, Minhwan expressed that he was upset that Yulhee sided against him. He said, “It was scary when you guys were talking [like that] earlier.”

In response, Yulhee showed aegyo and tried to comfort him. She said, “The atmosphere was bright because I took the same side as your mother and sister. It’s not like I’ve been bottling up those thoughts.”