Epik High spoke about their upcoming album “sleepless in __________” and the participating artists.

On February 28, the hip hop trio held a V Live to talk to fans about their new album. The group previously announced the full collaborator lineup including Sunwoo Junga, Yuna, BTS’ Suga, Crush, and Code Kunst.

During the live broadcast, Tablo talked about how Sunwoo Junga liked the song for its unique emotions and healing aspects. He, in turn, then described how her voice added another indescribable element to the song.

Tablo then talked about his longtime friendship with Code Kunst. He’s featured in three of the producer’s songs and this is the first time that Code Kunst will be participating in Epik High’s album.

Crush previously featured in the track “Munbae-dong,” which is a song about Epik High and their fans in the group’s last album “We’ve Done Something Wonderful.” Tablo added that the members like Crush as a person and an artist for his ability to pull off any song, and said they’re glad to work with the R&B singer again on a song that fits him perfectly.

About Malaysian singer-songwriter Yuna, Tablo began, “She’s known as Pharrell Williams’s protégé and is an amazing person. Her tone is so pretty and she completed an awesome song with Epik High.” 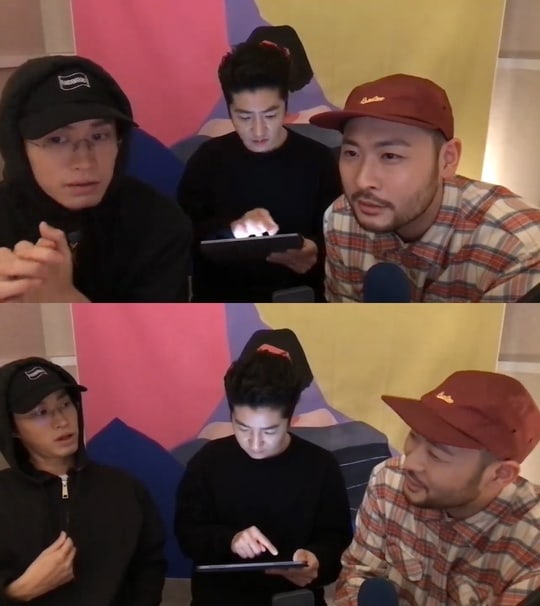 He continued, “The final person that was revealed was Suga. When BTS’ Suga was revealed, the lineup of participants was completed. After hearing that we would be working with Suga… Suga raps and writes songs as well. He’s similar to us in some way. Since he’s someone who’s good at both things, many people asked if he would be rapping or producing. When many people were curious and since there were so many people and reporters asking us, we confirmed that he participated in producing.”

He added, “There may be people who know this, but Suga, thankfully for us, said that he liked Epik High’s music a lot during his younger years and said that he gained a lot of inspiration through our music. On the other hand, we also listen to the music that they’re making and are feeling a lot of things. So we wondered what song we should make when these two emotions become one. We discussed a lot about this and that, and experimented a lot to see if we should make this kind of song or that kind of song.”

Tablo said, “In the end, Suga and I co-wrote the song and Mithra wrote the lyrics. Wow, I feel like I’m going to slip up and give a spoiler. We completed a song that will comfort many people. It’s a song that may make you ask yourself if it’s something like what you heard before on an Epik High album. At the same time, it might also make you wonder if you ever heard this kind of thing before on a BTS album. It’s something in the middle and we completed a song that we really like.”

Epik High
BTS
Suga
How does this article make you feel?