On the March 1 broadcast of MBN’s “Modern Family,” the couple made their first appearance on the show and revealed what their life was like a week before their marriage.

During this episode, Lee Sa Gang’s mom traveled from Daegu to Seoul to help with wedding preparations. The MV director’s mom caught everyone’s attention with her black fur coat and bright red suitcase and introduced herself with her nickname, “Hwajin Lee Myung Sook.” Lee Sa Gang explained, “My mom doesn’t work in the arts, but she wants to use her nickname a little bit more. Hwa means to harmonize and Jin means to move forward. It has the same meaning as my husband’s real name, Chun Byung Hwa.”

Her mom carefully opened up about her son-in-law Ron. She began, “At first, I disapproved because he was young. But after spending time with him, I found that he’s an optimistic person. Now, I like Ron for who he is as a person.”

She expressed her love for her son-in-law with endless nagging. She suggested that he lose weight for the wedding, but also added, “Sa Gang is the one getting married, but as a parent, I feel satisfied and happy.” She then suggested that they go to buy things they need, and the three headed to a bedding store.

Looking at the mat her mom chose for them, Lee Sa Gang said, “I think this is too expensive,” and her mom replied, “You guys are being so frugal that I’m getting upset.” The mother-in-law said in her interview, “I hope that they’ll live beautifully, in a way that’s fitting for a newlywed home.” In the end, she was able to purchase one pillow for the couple after begging that they let her buy them something.

Back at Ron and Lee Sa Gang’s home, Ron cheered up his mother-in-law by making mille-feuille nabe. The three of them then laid down in bed together and shocked everyone back at the studio. Lee Sa Gang revealed, “We always sleep together in one bed whenever my mom comes over,” and surprised everyone some more. 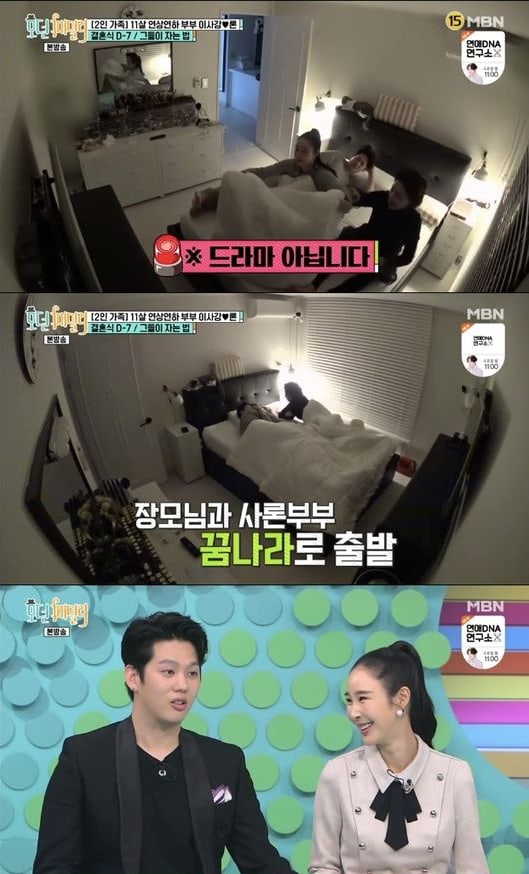