Actor Nam Joo Hyuk joined tvN’s “Coffee Friends” as a part-time worker and impressed all with his work ethic.

“Coffee Friends,” a cafe run by Son Ho Jun, Yoo Yeon Seok, Choi Ji Woo, and Yang Se Jong where customers can freely donate any amount they wish for the items on the menu, opened for its final day of business on the March 1 broadcast of the show.

As a part-time worker at the cafe, Nam Joo Hyuk started out doing the dishes. He proved to be incredibly fast, and, once finished, moved out to the juice station, where he also impressed with speed. The actor continued to draw praise from his coworkers, always asking if there was something else he needed to do and picking up different tasks at the cafe with ease.

Nam Joo Hyuk worked tirelessly, to the point Yang Se Jong had to insist he take a break. When Nam Joo Hyuk returned from his “break” in the blink of an eye, Yang Se Jong commented, “You’re already back? You do everything. You’re the best. Really.”

Yoo Yeon Seok and Son Ho Jun expressed their awe at how smoothly the day went with Nam Joo Hyuk, saying, “Our teamwork today was amazing.” Yoo Yeon Seok added, “If it weren’t for you and [Jo] Jae Yoon hyung today, we would’ve been so dead.” 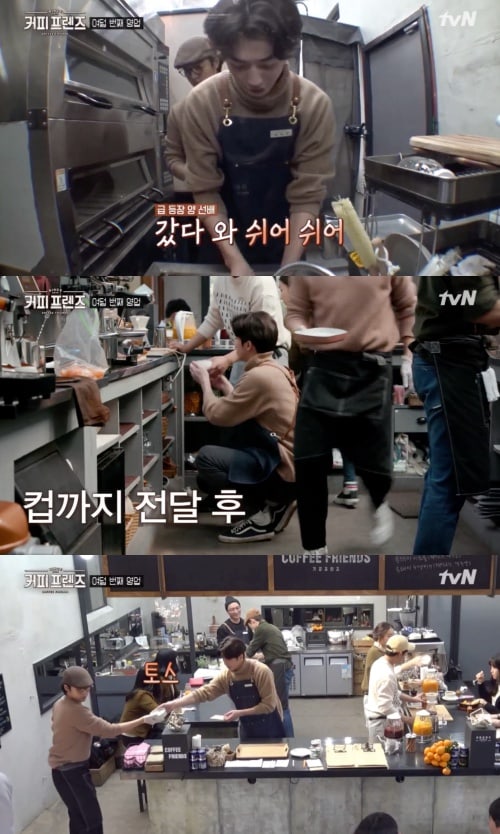 Nam Joo Hyuk
Coffee Friends
How does this article make you feel?