Cha Tae Hyun Jokes That Kim Jong Kook Has A Wife And Kid; Reveals Secret Behind Their Peaceful Friendship

Cha Tae Hyun humorously made up a rumor about his close friend Kim Jong Kook on JTBC’s “Ask Us Anything”!

On the March 2 broadcast of the variety show, Cha Tae Hyun, Hong Kyung Min, and Samuel, who are currently promoting together as musical trio Brave Hong Cha, appeared as guests.

During his introduction, Cha Tae Hyun chose his best friend Kim Jong Kook as one of his strengths. He explained, “[Kim Jong Kook] sings whenever I ask him to. I frequently call him after drinking. One time, I think he was out eating somewhere, and he kept saying, ‘Stop [asking me]. I can’t do it right now.’ But when I’m drunk, I get stubborn. He later told me that he crouched under the table to sing for me on the phone.”

Hong Kyung Min made everyone burst into laughter by remarking, “When I call Kim Jong Kook, there are only three possibilities—he’s either on his way to go work out, he’s working out, or he’s on his way home after working out.”

Kang Ho Dong commented that he could tell how close they were, and Super Junior’s Kim Heechul asked if Cha Tae Hyun could call Kim Jong Kook right now. The actor dialed his number and put him on speakerphone, but Kim Jong Kook didn’t answer. Cha Tae Hyun noted, “He doesn’t answer when he’s in America,” and Kang Ho Dong joked, “Maybe his wife will answer.”

Cha Tae Hyun continued the joke by playfully replying, “His wife is in America.” Lee Soo Geun played along by asking, “When is the wedding?” Cha Tae Hyun joked, “They already got married. They even have a kid. He’s not answering; he must be watching his kid.” 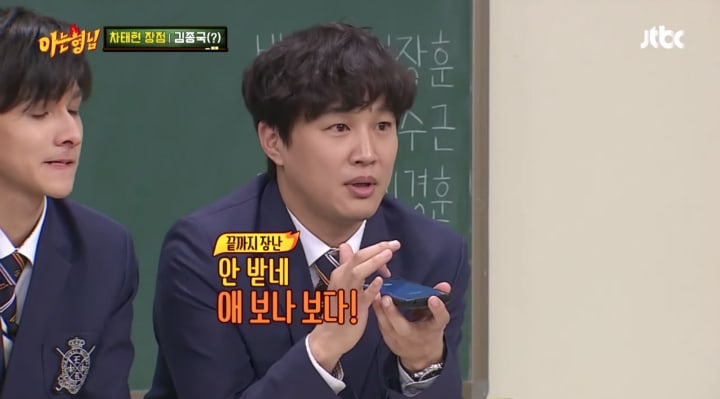 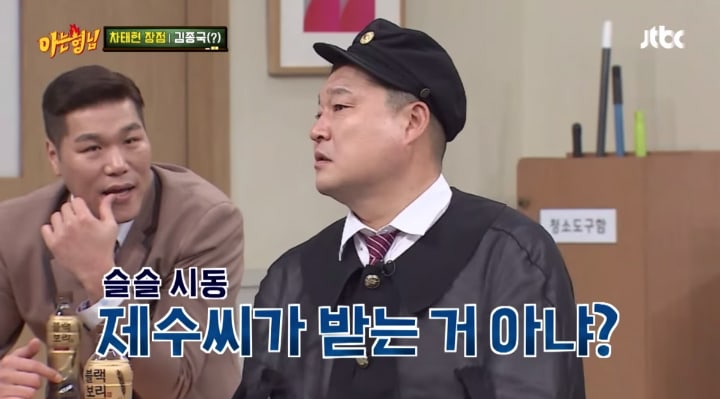 After everyone shared a good laugh, Hong Kyung Min said, “Honestly, the rest of us don’t make those kinds of jokes to that degree when [Kim] Jong Kook doesn’t like it, but [Cha] Tae Hyun is the only one that continues with that joke. The reason why Jong Kook can’t do anything to Tae Hyun is because [Cha Tae Hyun] said that he would call the police if he were to hit him even once.”

Referring to their friend group known as the “Year of the Dragon” club, which consists of Cha Tae Hyun, Kim Jong Kook, Jang Hyuk, Hong Kyung In, and himself, Hong Kyung Min continued, “About 20 years ago, whenever all of us gathered together, people always asked who would win if Kim Jong Kook and Jang Hyuk got into a fight and who the real leader [of the group] is. But they actually all listen to whatever Cha Tae Hyun says.” He explained, “Cha Tae Hyun made a declaration that if they hit him even just once, he would call the police right away, and he wouldn’t settle.”

Cha Tae Hyun added, “There are a lot of things that the five of us have said we should do together, and we’ve talked about holding a concert together. But whenever Hong Kyung Min comes up with an idea, it always ends up getting stopped by Kim Jong Kook. Something just doesn’t work out. I don’t know why, and whether it’s because of money issues, but it just doesn’t work out. So when I see even a little bit of that [resistance], I just put a stop to it.” 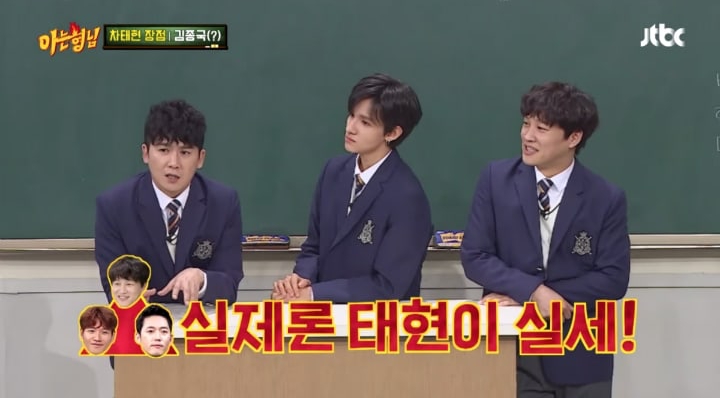