Cha Tae Hyun talked about being a fan of Samuel before his debut.

On the March 2 broadcast, Cha Tae Hyun, Hong Kyung Min, and Samuel appeared as guests on JTBC’s “Ask Us Anything.”

When Kang Ho Dong asked how the trio’s project group Brave Hong Cha was formed, Cha Tae Hyun replied, “‘2 Days & 1 Night‘ said they would make the dream of my 40s come true, so they took me to Brave Brothers without informing me. I participated in an audition and asked him for a song. But you know [the staff of ‘2 Days & 1 Night’] don’t tell you anything. I was so surprised, and Brave Brothers said okay, so we got a song. But I thought the song was too good to only be used for ‘2 Days & 1 Night.'”

Seo Jang Hoon asked Hong Kyung Min about his experience, and the singer explained that the staff also surprised him. He added that he already had a song for his solo album that was ready to be released, but he thought about it and decided that it would be better for him to promote with Brave Cha Hong instead.

About Samuel, Hong Kyung Min began, “We’re so relieved [Samuel joined us]. Imagine if it was just the two of us.” Cha Tae Hyun explained, “Samuel is an artist under Brave Entertainment. I knew him because I watched all [of ‘Produce 101 Season 2’] from start to finish. When I saw Samuel for the first time, I thought, ‘He’s going to win first place,’ and he did win first place on that day of evaluations.”

When asked how he learned about fellow Brave Cha Hong member Cha Tae Hyun who’s 26 years older than him, Samuel commented, “I knew of Cha Tae Hyun. I got to know him through ‘2 Days & 1 Night’ and liked him in the film ‘Along with the Gods.’ I got to know Hong Kyung Min because of my mom. My mom is a big fan.”

When Seo Jang Hoon asked, “Do you know the ‘2 Days & 1 Night’ that Kang Ho Dong used to appear on?” and Super Junior’s Kim Heechul added, “Who’s more fun?” Samuel made everyone laugh by immediately answering, “Cha Tae Hyun,” and added, “Kang Ho Dong screams too much.” 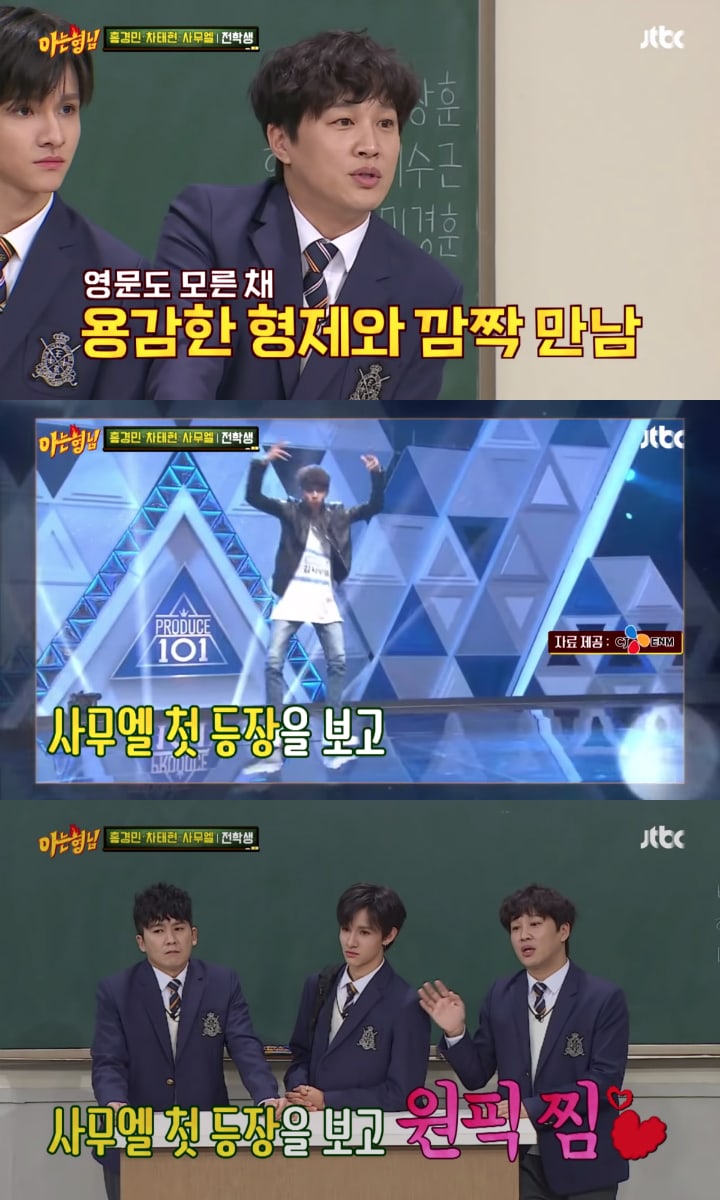