On the March 3 broadcast, the singer appeared as a guest and whipped up a dish for the cast.

Stating that he would be making Chinese-style beef lettuce wraps for everyone, Taemin said, “I’m not good at cooking and don’t know if it’ll be delicious.” Kim Young Nan gave him encouraging words of support and Kang Ho Dong asked about his favorite food.

Taemin answered, “I like meat. I’m also really into Chinese food these days like deep fried chicken, in hot pepper sauce, Yuxiang shredded pork, and lamb skewers.” He revealed that this was his first time cooking for other people and revealed that he went to a cooking academy to take lessons for the show. Before cooking, he checked the recipe once more on his phone and headed to the kitchen.

After quietly eating some pieces of the Chinese bun, he began to wander around the kitchen trying to think of what to do next. He opened the refrigerator and saw the vegetables. He said, “I just remembered! I need to cut more [vegetables].” He put the wok on the stove and began frying cut up pieces of the Chinese flower bun. When he held up the wok and stirred the pieces of bread using his wrist, everyone showered him with praise and made him smile.

When Taemin began looking around for something, Kwanghee asked him what he needed and began looking for the missing ingredient in the refrigerator. Taemin found the bottle of oyster sauce and walked back to the wok on the stove. He added chili oil, oyster sauce, and sugar to the vegetables and meat and continued frying the ingredients together. After adding egg whites, he took out some starch. Kang Ho Dong asked if he would be mixing it with water, but Taemin added the starch as is to the vegetables and meat.

Taemin then tasted the dish and commented, “It’s okay. It’s better than I thought. It’s not super delicious, but okay to eat.” Kang Ho Dong also took a bite and then burst into laughter. He said, “I think it’ll be good for your health. It doesn’t taste strong and it’s not salty at all.” Kim Young Nan then tried some and said that it was alright. After Kwanghee ate some, he said to the actress, “You said that because you like Taemin. This lacks seasoning.” She replied, “Eat it with soy sauce” and walked away.

Taemin put his dish on the table and announced that he was all done. He then nonchalantly walked into the kitchen, spotted something in the kitchen, and said, “Ah! I forgot to put onions in the dish!” 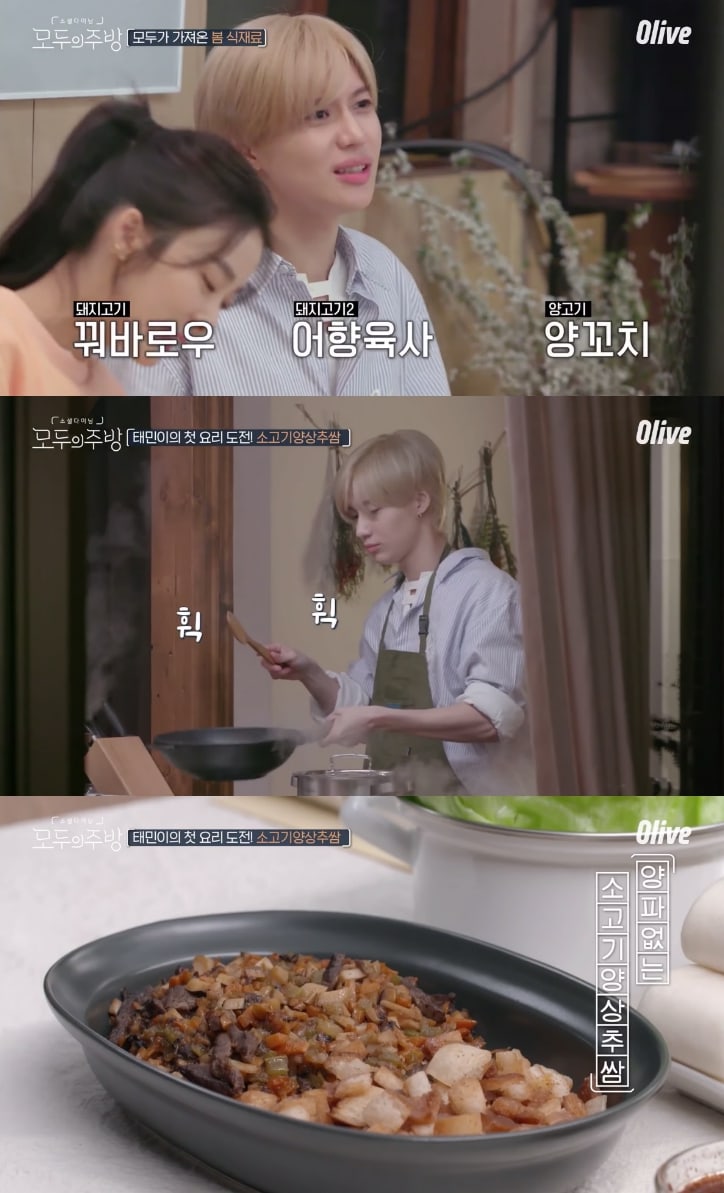 Taemin is currently promoting his second mini album “WANT” and will hold his solo concert “T1001101” at the SK Olympic Handball Gymnasium from March 15 to 17.

SHINee
Taemin
Everyone's Kitchen
How does this article make you feel?