After introducing themselves, the members shared their thoughts on how it feels to have debuted. They expressed nervousness and excitement saying, “We were really surprised at the amount of love given to us and while it feels undeserved, it makes us want to work even harder.”

Soobin then explained their debut album “The Dream Chapter: STAR” and title track “Crown” being about an adolescent who feels alone and unable to do anything, but then meeting someone else and being able to accomplish things together much like what their group name stands for, TOMORROW X TOGETHER. 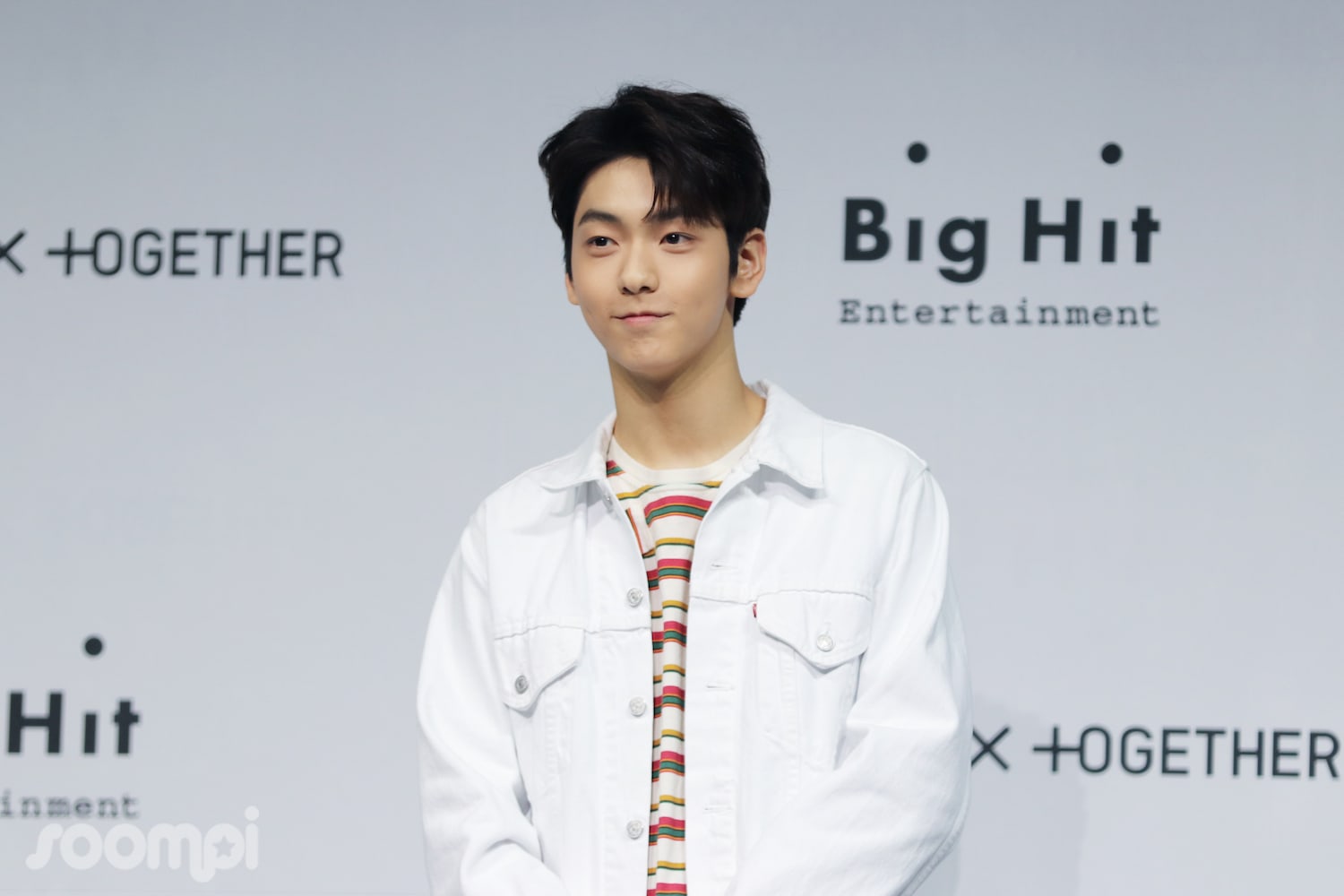 Yeonjun shared, “When I met the members, who have the same dream as me, I felt that I wasn’t alone. While recording our title track, I thought that listeners who might not be our age will still be able to empathize.” Taehyun added, “A lot of people might have wondered what our title song meant. The horns symbolize growing pains experienced during puberty and growing up.” They further explained that the horns change into a crown upon meeting someone who is similar and understands you. 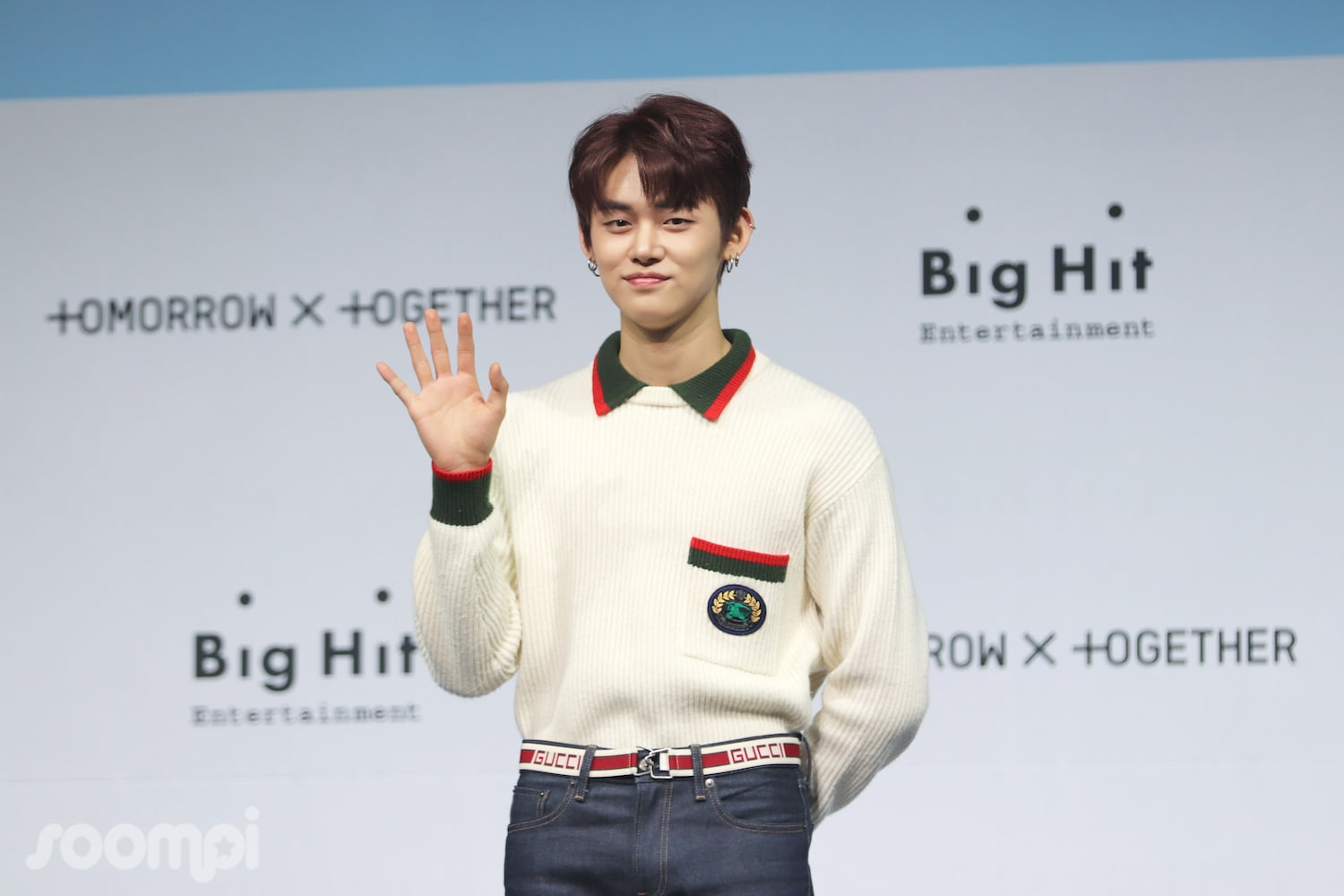 TXT also talked about advice they received from Bang Shi Hyuk and BTS. Soobin shared, “Bang Shi Hyuk said, ‘Practice is the foundation of confidence. Practice a lot and be free on stage. When you stand on stage you will realize why practice is so important.'” Hueningkai added, “[Bang Shi Hyuk] always emphasizes the importance of teamwork and tells us to think about the importance of our team.”

“I’m a huge fan of BTS. Whenever I run into them at the agency, my heart trembles and I become nervous. Whenever I see them, they also emphasize the importance of teamwork just like Bang Shi Hyuk.”

Beomgyu also shared, “I’m a huge fan of BTS. Whenever I run into them at the agency, my heart trembles and I become nervous. Whenever I see them, they also emphasize the importance of teamwork just like Bang Shi Hyuk. They said, ‘Think of the team first,’ and, ‘Become a great artist.'” 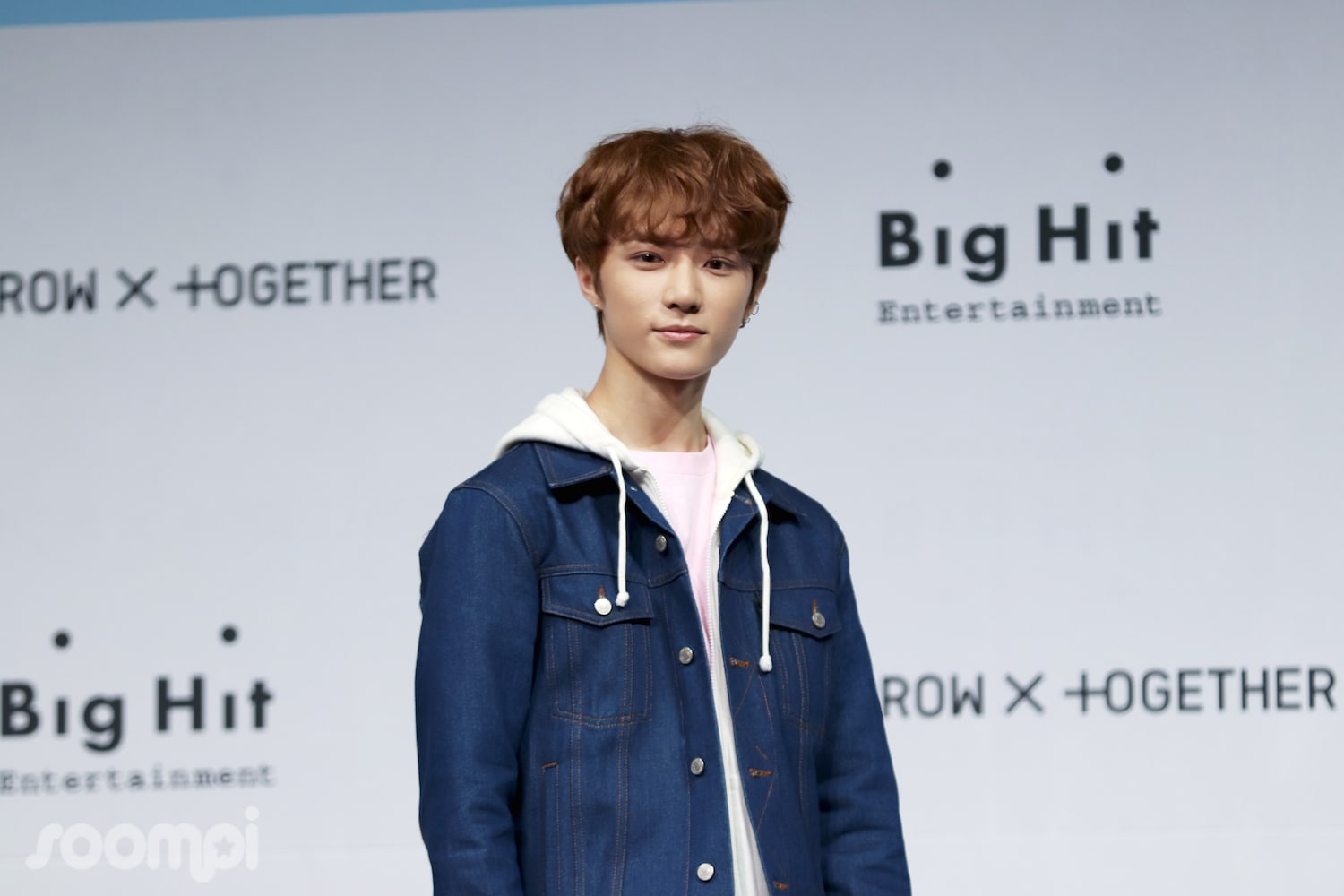 Yeonjun also talked about BTS and commented, “They are senior artists who are like the sky above us. While recording we watched a year-end show and heard them mention that we are debuting soon and it’s such an honor to have them also mention us on the red carpet.”

As for goals the group has, Soobin answered, “I’d like to get the rookie award since you can only get it once. There are a lot of outstanding rookies, so I think we have to work very hard.” Yeonjun said, “Since we debuted, a concert is a big dream but hopefully we can advance overseas.” 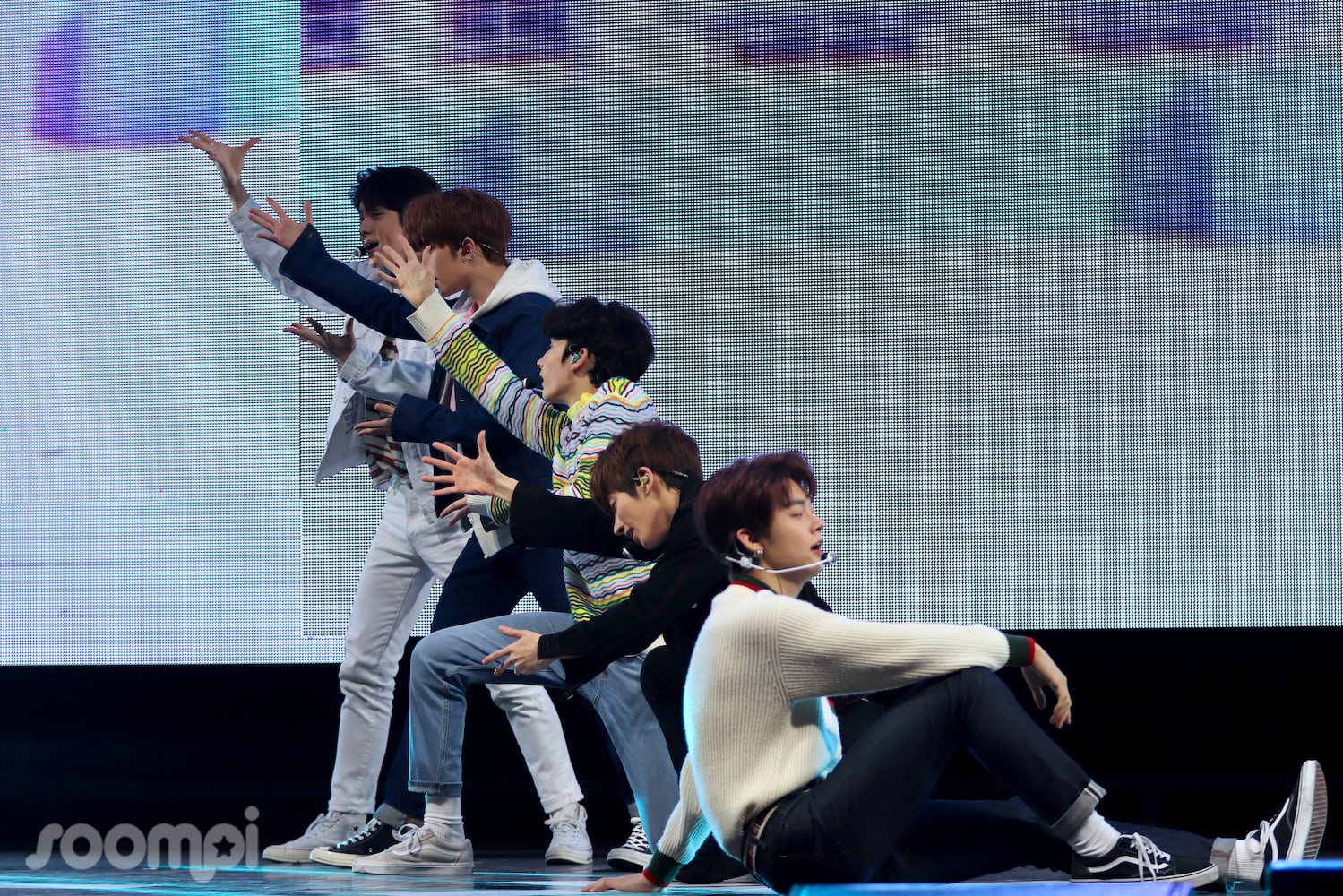 Regarding being called BTS’s junior group, Soobin said, “It’s an honor to be called that. I’m very thankful. We’ve had worries, but we will work hard to not cause any harm to their reputation.”

When asked about comments saying TXT has a silver spoon compared to BTS, who went through difficulties in their rookie days, the members talked about how thankful they are. Hueningkai said, “Since we were able to see our seniors achieve so much after going through difficulties, it’s an honor and we respect them. We will work hard.” 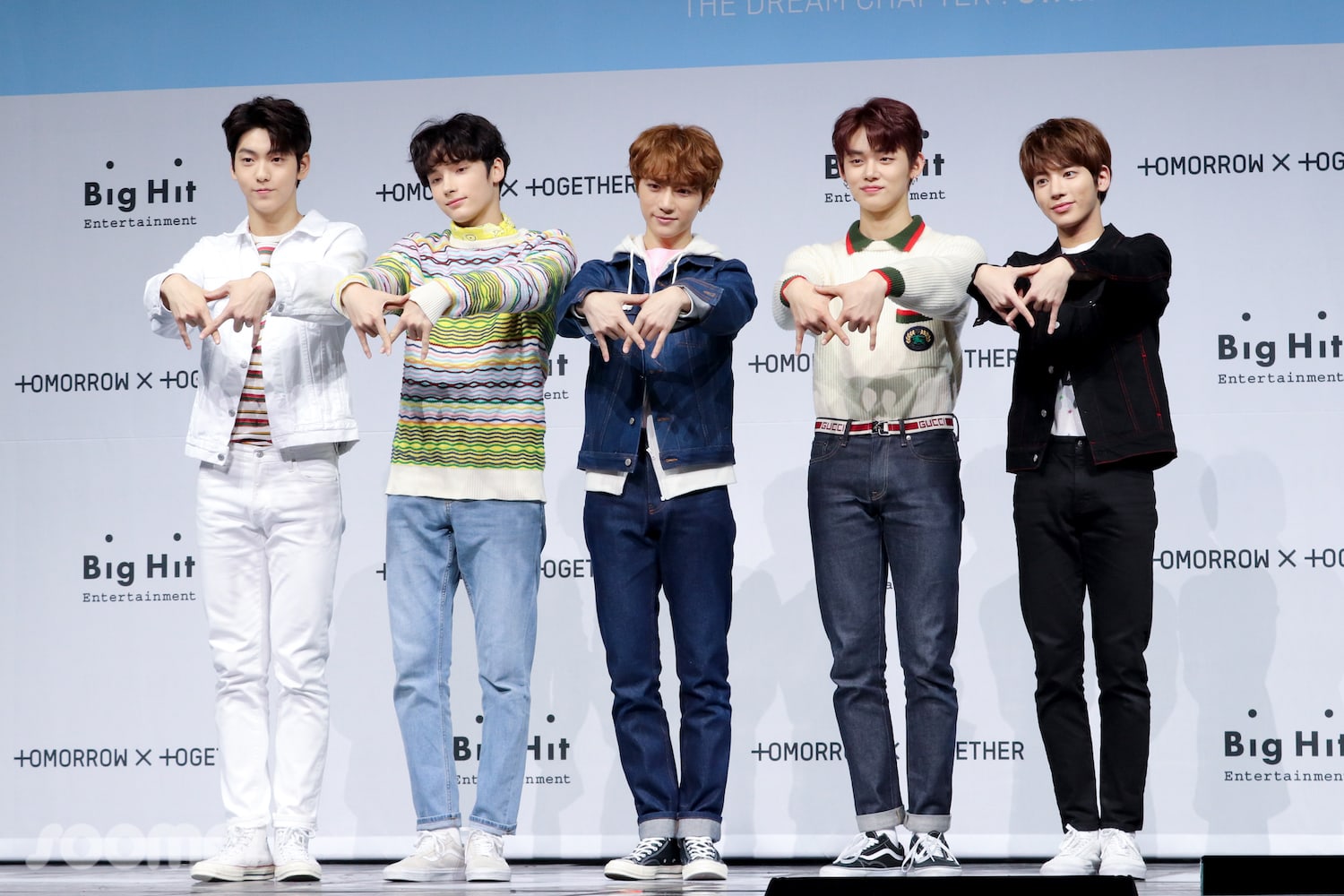 TXT was asked if any members plan on producing in the future. Beomgyu answered, “Hueningkai and I work on songwriting; we’re trying and practicing. Hopefully we can get better and contribute to songs in future albums.” Hueningkai added, “I’m still lacking in those skills, so I would like to build them up and produce songs for our members to sing later.” Beomgyu also revealed how Yeonjun created the TXT hand logo that the group proudly showed off.

“I’m more of a leader that supports the members.”

Each member was also asked to talk about their special charms. Taehyun said that his is being lovable while Yeonjun shared that when he auditioned he thinks his diligence was looked upon as a strength. Beomgyu commented that he’s the mood maker and he cheers on the members with his endless energy. He also shared that he speaks in a dialect. Hueningkai said, “My charm, which the hyungs all fell for, is my cuteness.” Lastly, Soobin talked about how he’s the leader, but he’s different from a typical leader and said, “I’m more of a leader that supports the members.” 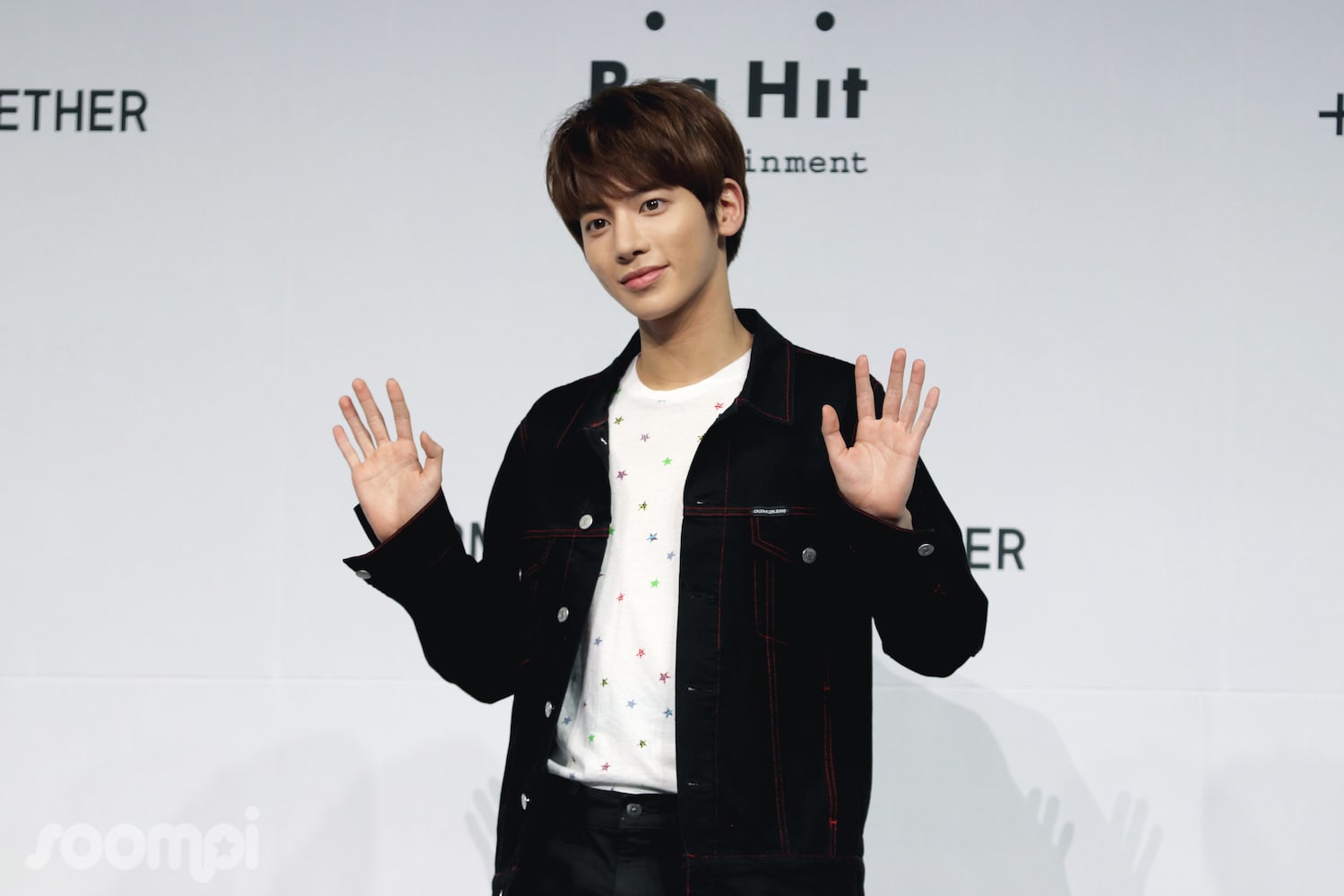 Soobin talked about being the leader despite not being the oldest member, and said, “Since my age is in the middle, the members can approach me and talk to me more easily. The members are good, so I don’t feel burdened with responsibility.”

Being the only foreigner member of the group, Hueningkai talked more about his family background and how he adjusted to Korea. He said, “After being born overseas, I soon after moved to China. My mother is Korean and my father was a singer in China, so I was naturally exposed to Korean music. I came to Korea and went to an audition for Big Hit.” 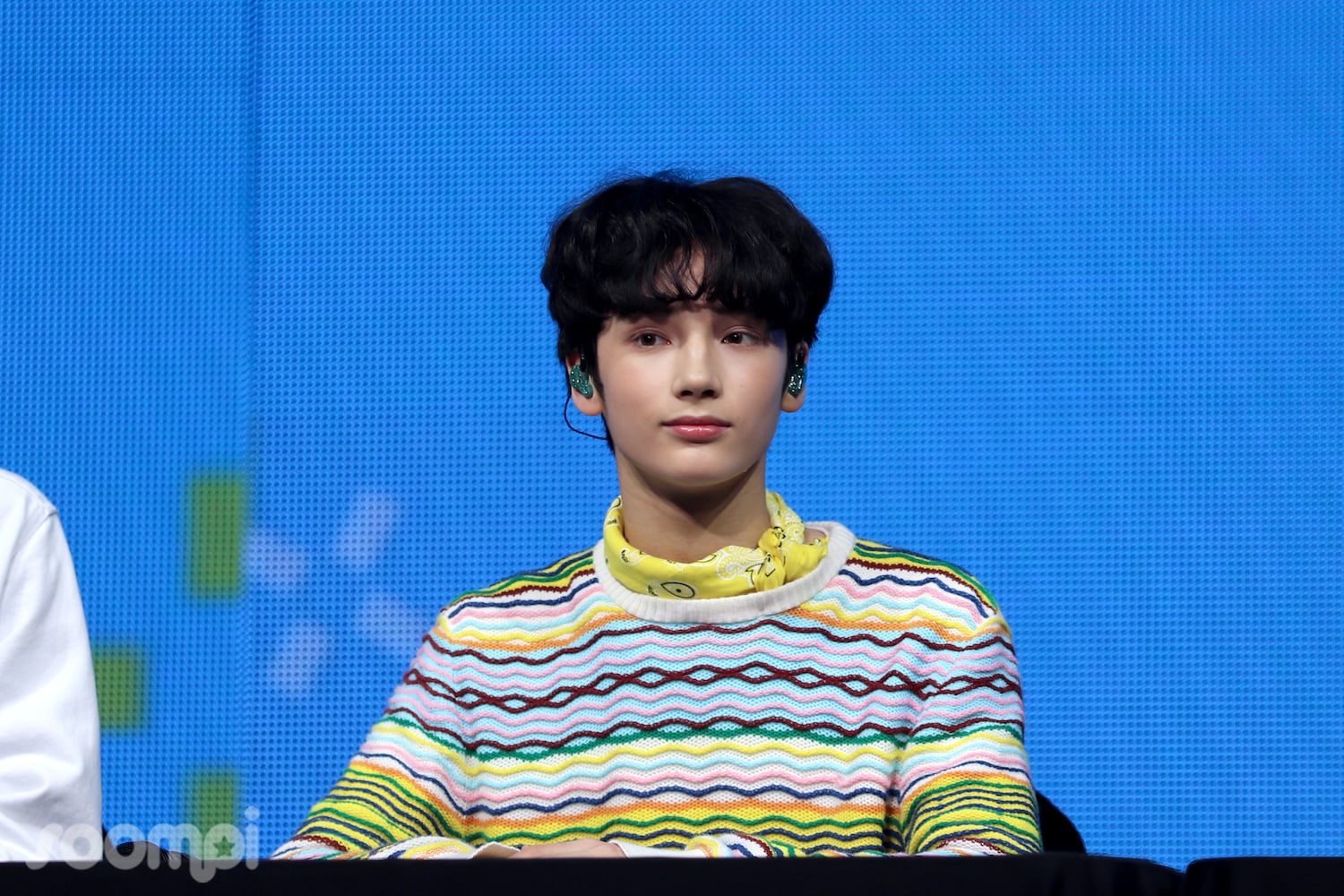 Hueningkai further shared, “At first, my family worried a lot, but I got used to Korean culture and the Korean language. I became more comfortable and liked it more. My members all take good care of me also because I am the maknae and I am charming.”

“Our personalities are similar and we are tenderhearted, so we listen to each other and help each other heal.”

Interestingly enough, all of the members have blood type A with the exception of Beomgyu whose blood type is AB. Beomgyu was asked if he found this difficult as blood type stereotypes are popular in Korea. Beomgyu said, “Most of our members are blood type A, but they don’t get upset easily. Our personalities are similar and we are tenderhearted, so we listen to each other and help each other heal.” 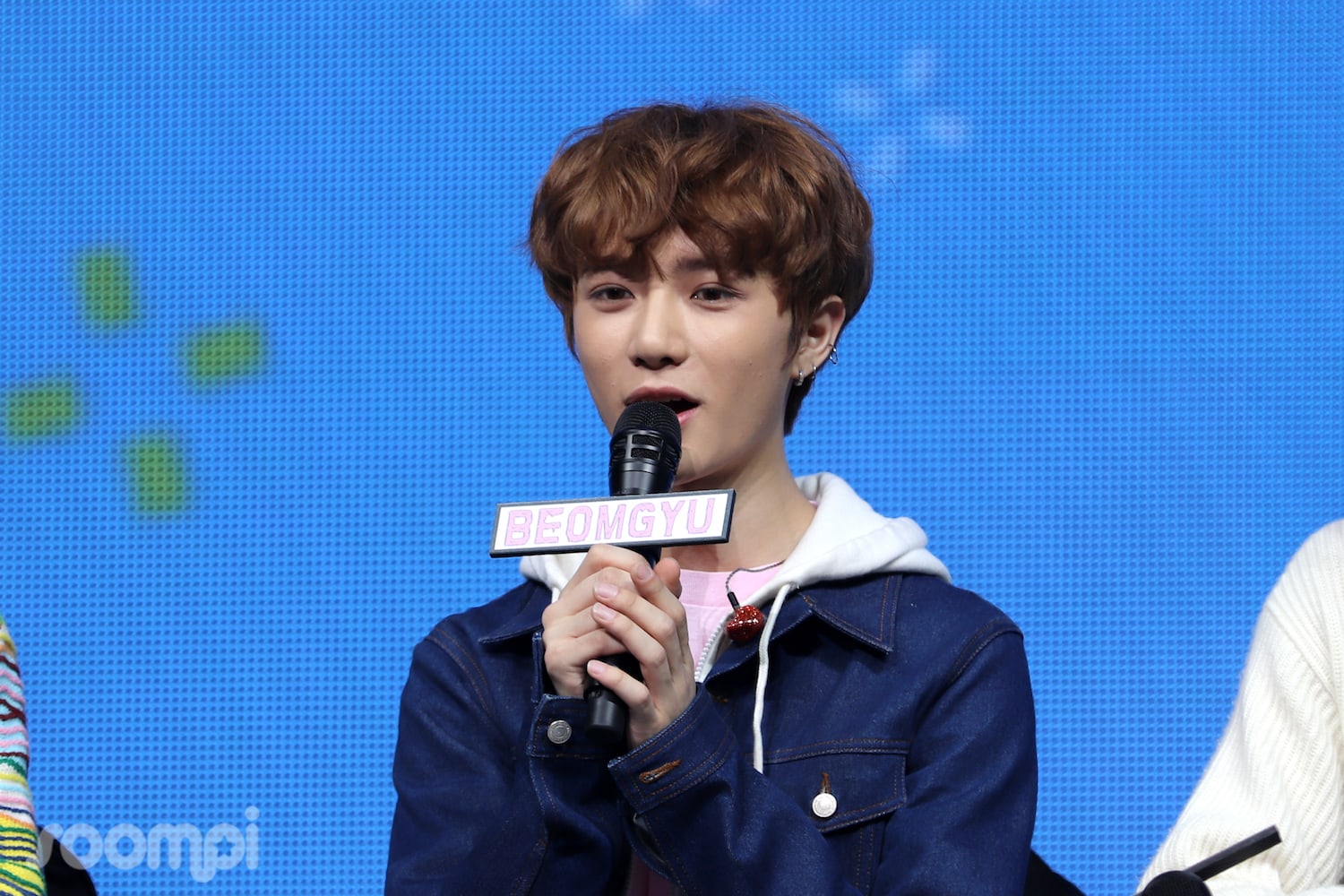 TXT was also asked if they want to do more hip hop in the future considering their agency’s reputation. Taehyun answered, “All of the members like hip hop and other genres; we all like music in general. All five songs on our album are of different genres.” Yeonjun added, “Our song ‘Cat & Dog’ is a hip hop track, so we have no regrets regarding hip hop [for this album].”

“I think I was able to overcome growing pains perfectly because of the members and knowing that I was not alone.” 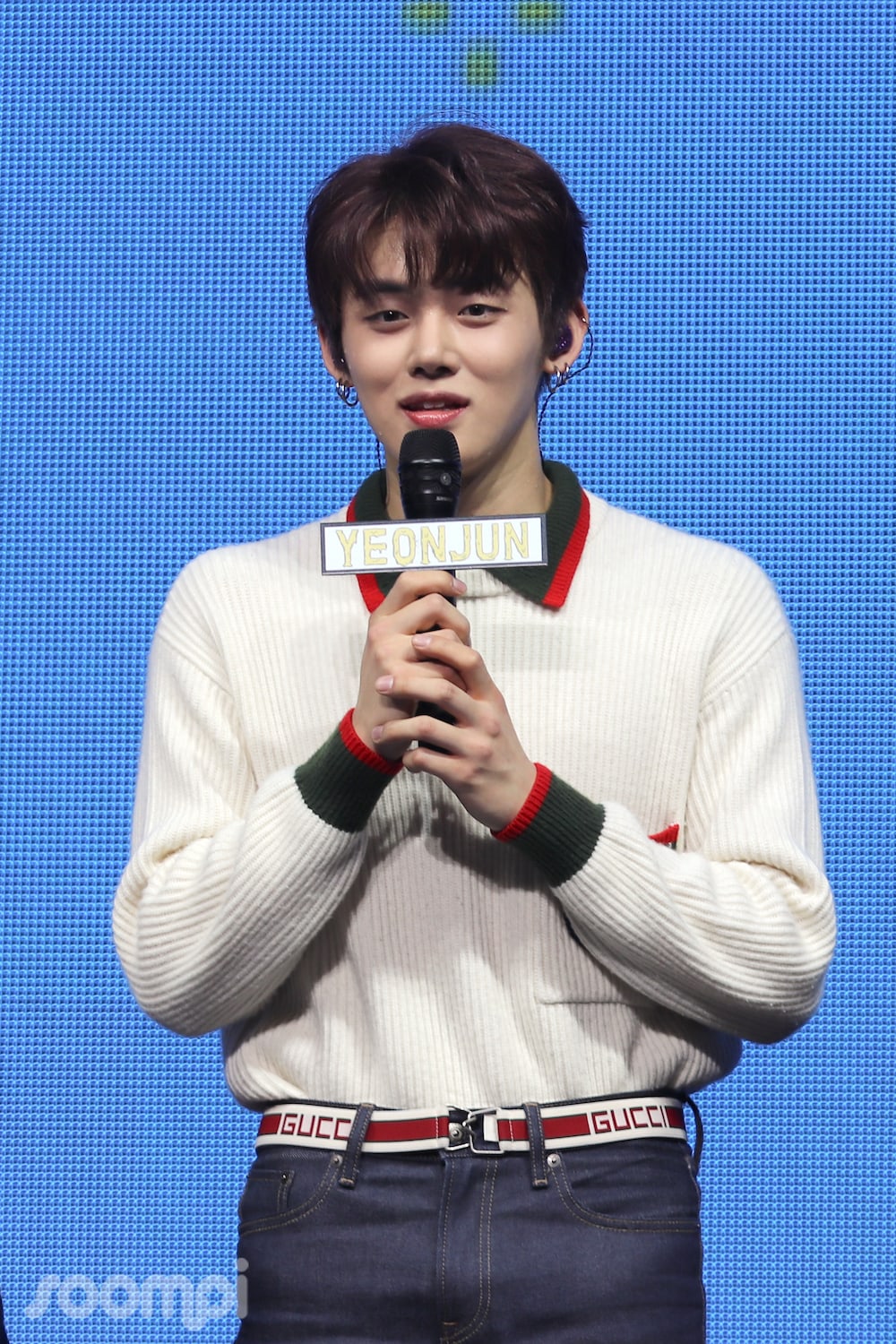 The members also talked about who had the longest and shortest trainee periods at their agency. Yeonjun said, “I had the longest trainee period. Four years. The most difficult part was wanting to debut so much, but having to wait.” Beomgyu stated, “I spent the shortest time training. Two years at Big Hit. After joining the group, it was hard to catch up to the members at first.” 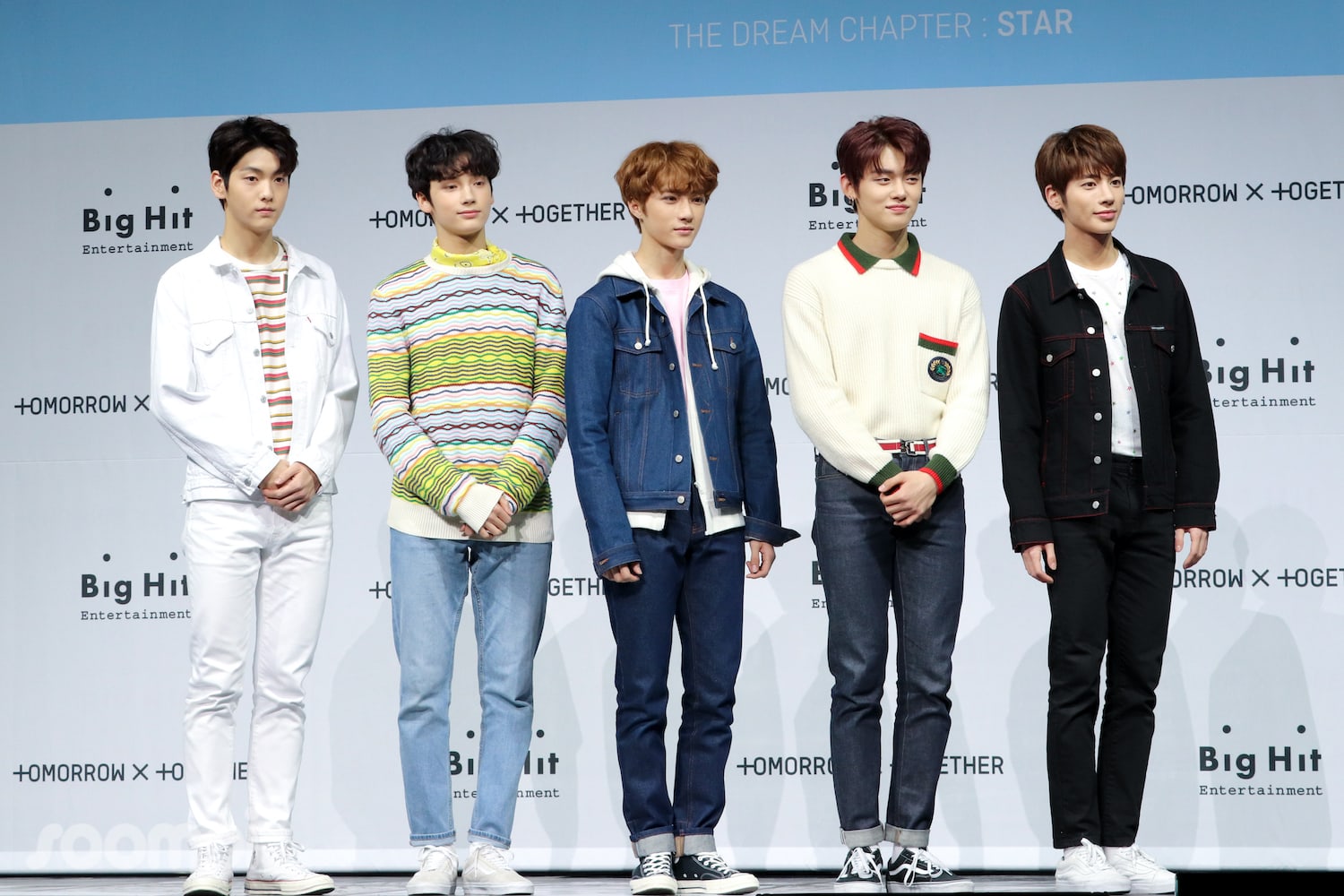 Soompi Spotlight
TXT
How does this article make you feel?