NU’EST updated fans on what they’ve been up to!

Minhyun began, “I recently went to Budapest, Hungary for a shoot and it was such a beautiful city. I think the photos and videos will come out well because the scenery was so nice. I revealed my everyday life through social media when I had time, and I’m glad that the fans also felt good to see my posts.”

The NU’EST members then shared the secrets to their handsome selfies. JR said, “My outfit is the only thing that changes. I have my own angle,” and Ren added, “I think [my angle and expression] change depending on the background.” Baekho revealed, “I’m collecting my photos these days. I’ll release all of them later at once.”

About the spicy dumplings he ate on JTBC’s “LAN Cable Life” (literal title), JR commented, “I can’t eat spicy food. It was delicious but spicy.” When one fan commented that Aron looked like a gym student because of his outfit, he replied, “I like clothes that are comfortable.” 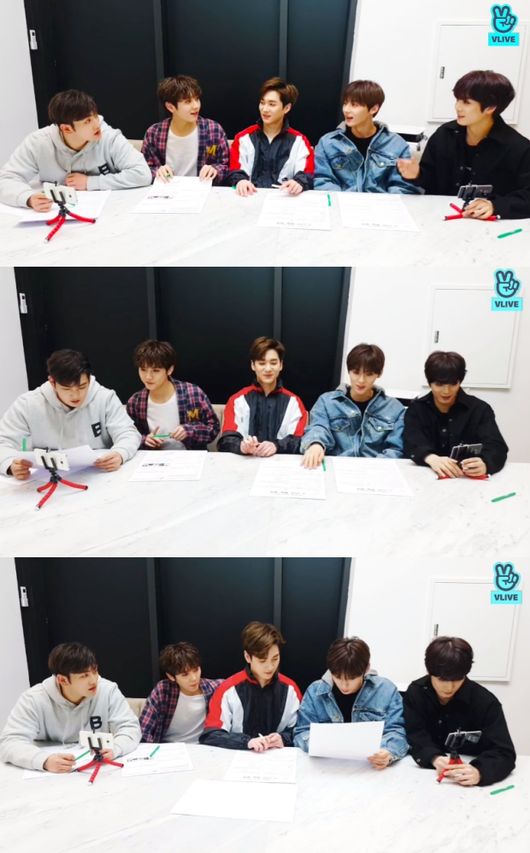 Many NU’EST fans are eagerly awaiting their new album, which will be their first release as a full group since 2016. During the time since, four members have released music as the sub-unit NU’EST W and Minhyun has promoted with the project group Wanna One. A song is planned to be released digitally in mid-March before their new album.

Baekho said, “JR’s rap is amazing this time. Please look forward to it.” JR stated, “Minhyun’s voice is sweet, and of course I don’t even need to explain, Baekho is NU’EST’s main vocal.”

Minhyun added, “We did not give spoilers about what the new album is about. We recorded it and finished everything well.”

NU’EST recently announced information about their concert “2019 NU’EST Concert Segno in Seoul” which will be held on April 12 through 14 at the Olympic Park KSPO Dome in Seoul. “I’m feeling nervous and excited while preparing for the concert in April,” said Minhyun. “I’ll try my best to prepare for it so that we can have a fun time.” Baekho added, “We have to start practicing right away again. It’s a concert that I’m personally anticipating. Please look forward to it.”

Ren concluded, “It was fun to do a V Live together for the first time in a while. We’ll see you again soon with good news.” Aron added, “We’ll do V Live broadcasts frequently in the future. We’re working hard to get ready for the concert in April, so please look forward to it.”

JR said, “It’s been a really long time since we did a V Live with the five of us. Thank you to many people for tuning in. At the concert, I think that we’ll be able to let you listen to the songs that we recorded.” Minhyun added, “Stay on your toes and please wait for us!”

Are you excited for NU’EST’s return?