Greek mythology is rife with dramatic, romantic, and heroic tales and deities — which makes it perfect inspiration for K-pop! Many K-pop acts have borrowed themes from Greek myths, each putting its own unique twist on these timeless tales and figures. Let’s take a look at 11 times K-pop reinterpreted Greek mythology, including a little background introduction to the fearless heroes, daunting gods, and mysterious monsters that inspired these epic songs and concepts!

First up, the title track “Enough” off of SF9’s recent album “Narcissus” offers a reinterpretation of the Greek myth of a young hunter by the same name. Narcissus was known for his extraordinary beauty, but he scorned the many men and women who fell in love with him. When he rejected a nymph named Echo, who could only speak by repeating the words of others back to them, she became so heartbroken that she wasted away until she died, leaving nothing but her echoing voice. As heavenly punishment, Narcissus one day caught sight of his own reflection in a pool and became so deeply enamored with it that he could not bear to leave the water’s edge, where he remained until he died. 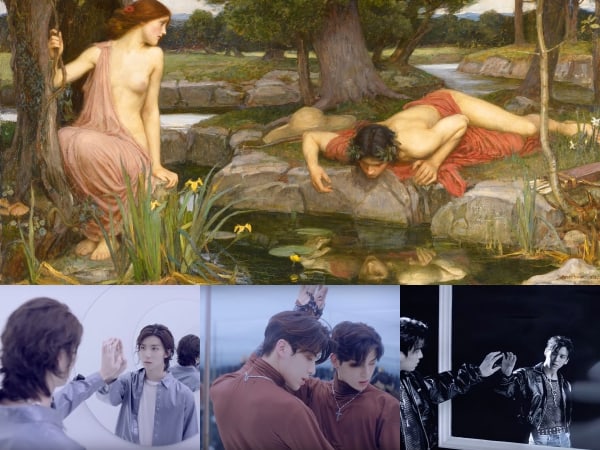 Contrary to the lamentable ending of the myth, SF9’s song takes the tale’s theme of self-love and turns it into a positive, reassuring listeners that they are “beautiful enough” as they are. And the MV includes plenty of visual nods to the ancient story as the boys gaze at their reflections in various mirrors and pools.

gugudan’s take on the Narcissus myth for their “Act 2. Narcissus” album is a bit more humorous, with the MV for their title track “A Girl Like Me” including plenty of nods to the modern meaning of the word “narcissistic.” The girls show a variety of signs of self-obsession: Hana looks longingly at herself in a mirror, Hyeyeon paints a self-portrait, Mina is in a room surrounded by photos of herself, and Mimi makes photocopies of her own face. 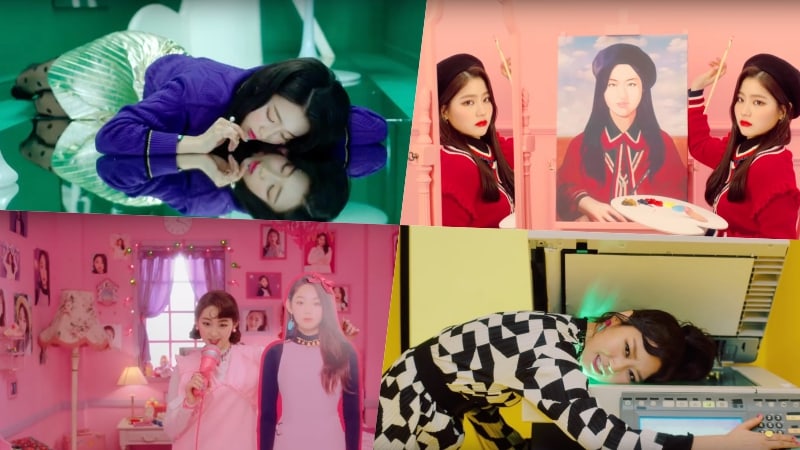 But the satirically self-absorbed music video doesn’t diminish the value of the lyrics’ message of self-confidence, so take a listen!

With hair that was made of live, venomous snakes, Medusa had a face that turned all who gazed upon it to stone. One of three sisters known as Gorgons, Medusa has long been the epitome of the dangerous woman — talk about femme fatale! 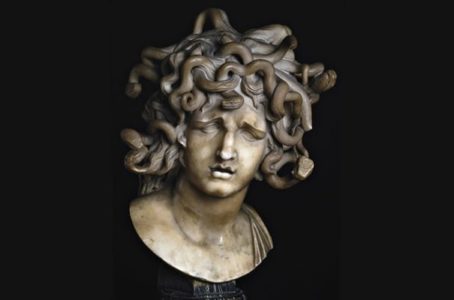 SHINee invokes the Medusa myth twice in two different songs. The first of these is “SHINe (Medusa I),” which plays on the theme of being blinded, with SHINee describing their fans as a light that they will continue to move towards “even if my entire body goes up in flame and is destroyed.”

The lyrics from “Dangerous (Medusa II),” on the other hand, are more obviously based on the myth, describing a woman who they are drawn to despite knowing that she is dangerous and using a direct allusion to the story: “No one’s ever seen you properly before / They say the moment our eyes meet is the end.”

SHINee’s “Selene 6.23” refers to Selene, the Greek goddess of the moon, to compare a love to the far away celestial body: “Though I extend my hand / Though I extend it with all my strength, I can’t reach you.” 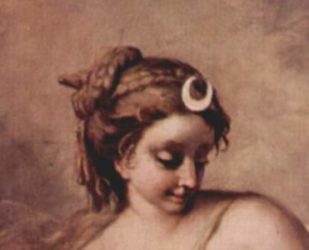 From “Selene and Endymion” by Sebastian Ricci.

The ballad also has a sweet double-meaning, as the boys have mentioned that it is dedicated to the international fans who don’t get to see them as often and therefore seem far away like the moon. The “6.23” in the title refers to the supermoon that took place on June 6, 2013.

Sirens were mythical female creatures that lived on rocky islands and enchanted sailors by singing to them, luring them to the shore where they met their end by shipwrecking on the rocks. Famously, the Greek hero Odysseus had his sailors plug their ears but tie him to the mast of his ship so he could listen to the Sirens’ spellbinding voices without being able to give in to the desire to steer his ship towards the shore. 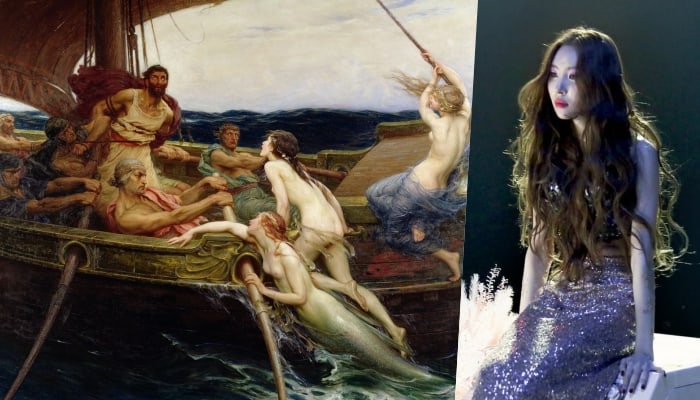 The original Sirens of Greek mythology were actually depicted as part-woman, part-bird, but the Siren has since become associated with the more modern myth of the mermaid. Sunmi dons the persona of this marine interpretation in her music video for “Siren,” with a sea-themed setting and lyrics that warn of her dangerous allure: “You know that I’ll hurt you / The beautiful me of your fantasies doesn’t exist.”

The three-part “VIXX 2016 CONCEPTION” album trilogy pays homage to a trio of Greek deities — Zelos, Hades, and Kratos — with each album featuring a distinctive mood that is inspired by its titular god. Zelos, as the god of jealousy and rivalry, is personified in the title track “Dynamite,” with lyrics that describe being enraged with envy over an ex. VIXX then followed up with their “Hades” album, for which the title track “Fantasy” emphasized a dark concept befitting of the god of the underworld: 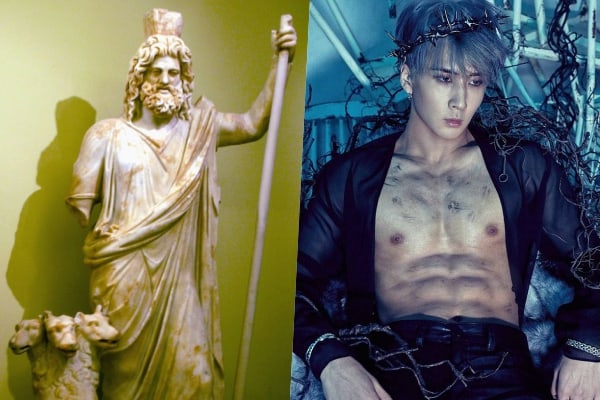 Finally, in tribute to Kratos, the god of strength and authority, title track “The Closer” from the “Kratos” mini-album is every bit forceful and commanding, from its terse beat to the repeated lyric “let me control you.”

Boy group A-JAX’s name refers to the legendary Greek hero Ajax, one of the greatest figures of the Trojan War. A cousin of Achilles, Ajax was famous for his immense size and strength, as well as his courage and intelligence on the battlefield. 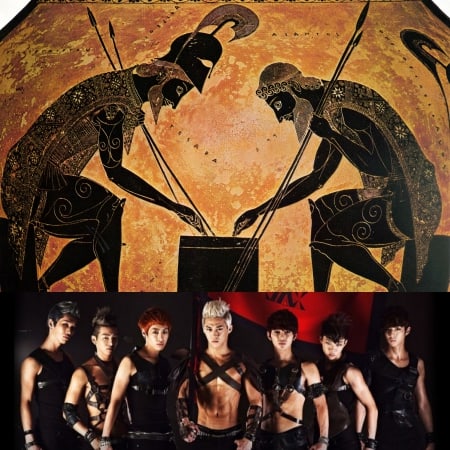 Top: Achilles and Ajax Playing a game, on an amphora by Exekias.

Channeling this ancient hero, A-JAX mastered the strong and fearsome concept for their debut song “One 4 U,” which is set in a backdrop that gives off Greek temple vibes:

B.I.G’s much under-appreciated 2016 track is dedicated to a woman who is, to their eyes, Aphrodite, the goddess of love, passion, and beauty. In one popular version of the story of Aphrodite’s birth, the goddess rose out of the sea foam produced after the Titan Cronus killed Uranus, the personification of the sky, and threw his body parts into the sea. 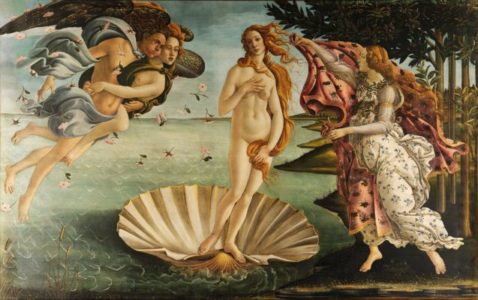 “The Birth of Venus,” Sandro Botticelli.

Watch B.I.G pledge their love to their Aphrodite in the catchy song:

The Nine Muses of Greek mythology were thought to preside over various types of art, music, science, and literature. They are generally accepted as: Calliope (epic poetry), Erato (love poetry), Euterpe (music), Polyhymnia (hymns), Terpsichore (dance), Melpomene (tragedy), Thalia (comedy), Clio (history), and Urania (astronomy). Ancient poets and historians often invoked a muse at the beginning of their works, calling upon her to sing through them. 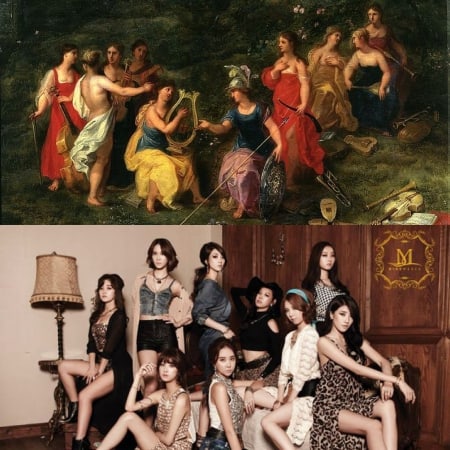 As representatives of the arts, it’s no surprise that the Nine Muses served as the namesake for a nine-member K-pop group. 9MUSES may have disbanded recently, but we can still appreciate their great music like their last single “Remember”:

Like all of BTS’s music videos, “Blood Sweat & Tears” has many, many layers to it. The music video is rife with references to classical Greek and Italian art, but it includes multiple allusions to one myth in particular: the tale of Icarus. The video juxtaposes the members in front of Herbert James Draper’s painting “The Lament for Icarus”: 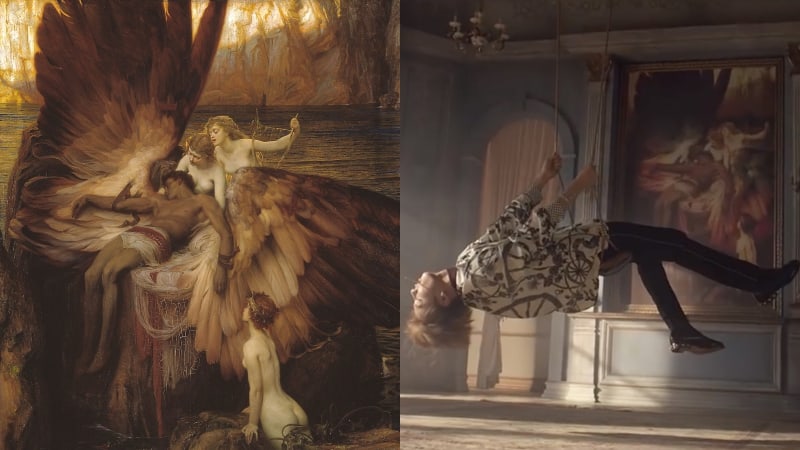 And in addition to the wing imagery throughout the video, V is depicted jumping off a balcony in front of the painting “Landscape with the Fall of Icarus,” attributed to Pieter Bruegel the Elder: 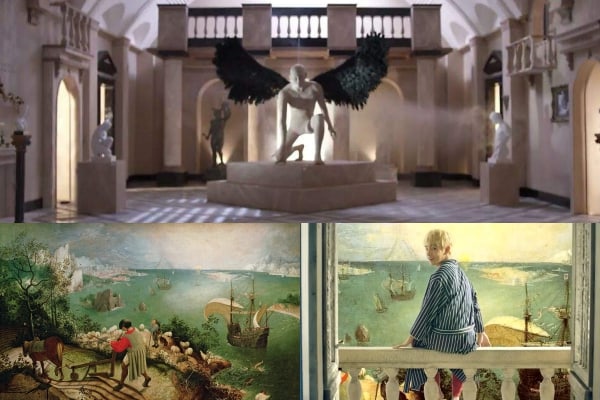 Icarus’s story is a cautionary tale: his father Daedalus made two pairs of wings out of feathers and wax so that the two could escape the island of Crete, where they were trapped. Daedalus warned his son not to fly too close to the sun or the wings would melt — but Icarus, elated in the flight, grew overly confident and soared upward until his wings melted, leaving him to fall into the sea and drown. The story is an apt metaphor for the love that BTS describes in the track: they know it will take everything from them, but they readily give their all (their blood, sweat, and tears!) for it anyway.

JYJ’s “Ayyy Girl,” which features Kanye West and Malik Yusef, may have little (okay, nothing) to do with Greek mythology, but the music video certainly draws one somewhat random parallel: it shows the guys dancing in a setting that is unmistakably Classical Greek architecture. The MV’s setting is similar to the structure of the Parthenon, the temple at Athens dedicated to Athena, the goddess of wisdom. 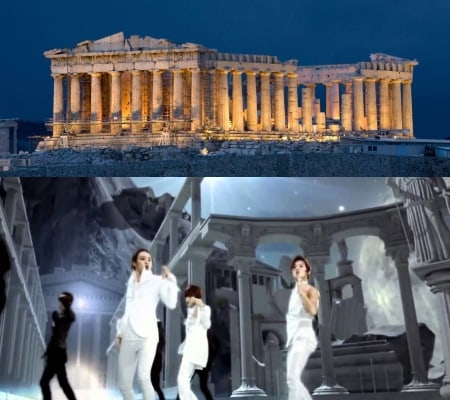 Top: the Parthenon at Athens.

Take a musical journey back to 2010 (and an architectural one back to 432 BC) with this OG track:

The Romans may have had their own distinct mythological system, but it had a lot in common with that of the Greeks. Indeed, many Greek deities had Roman counterparts, and K-pop has drawn inspo from the Romans too! BoA’s “Hurricane Venus” is named for Venus, the Roman version of Aphrodite, as is the group Hello Venus and their fitting debut single “Venus.” Boy group Boyfriend’s single “Janus” is named for the Roman god of beginnings, endings, and transitional periods — an appropriate title for a song about an impending breakup.

We hope you learned a little about Greek mythology, discovered some new K-pop songs, or both! Which of these mythological figures or K-pop songs/groups is your favorite? Let us know in the comments!

hgordon stays up way too late on weeknights marathoning K-dramas and trying to keep up with the latest K-pop releases. Writing this article has inspired her to re-read Ovid’s “Metamorphoses,” which she highly recommends to anyone interested in Greek mythology! Follow her adventures in Seoul on Instagram.