“Confession” is a new crime investigation drama about people attempting to uncover veiled truths that are hidden behind the law of double jeopardy. 2PM’s Junho will star as Choi Do Hyun, a character with a painful past whose father is found guilty of murder. Determined to prove his father innocent, Choi Do Hyun ends up becoming a lawyer in the hopes of saving him from the death penalty.

Meanwhile, Yoo Jae Myung will star as Ki Choon Ho, a former detective who refuses to accept a verdict from five years earlier and embarks on a quest to discover the truth. As the drama’s two protagonists, Choi Do Hyun and Ki Choon Ho will share a tense, complicated relationship—at times, they will face off as opponents, while at others, they will work together as allies.

On March 7, the upcoming drama released its main poster, which features its two leads clutching handfuls of paperwork as they stare solemnly into the camera. The poster is comprised of an image that appears to have been torn up into pieces and then pasted back together again, like a jigsaw puzzle that has been painstakingly solved.

The unique image hints at the torturous ordeal that awaits Choi Do Hyun and Ki Choon Ho in the drama—in order to arrive at the truth, the two men will have to collect shreds of evidence that have been intentionally scattered and fit them together.

Meanwhile, the poster’s caption dramatically reads, “A planned confession. Fabricated truth. The silence of that day is over!” 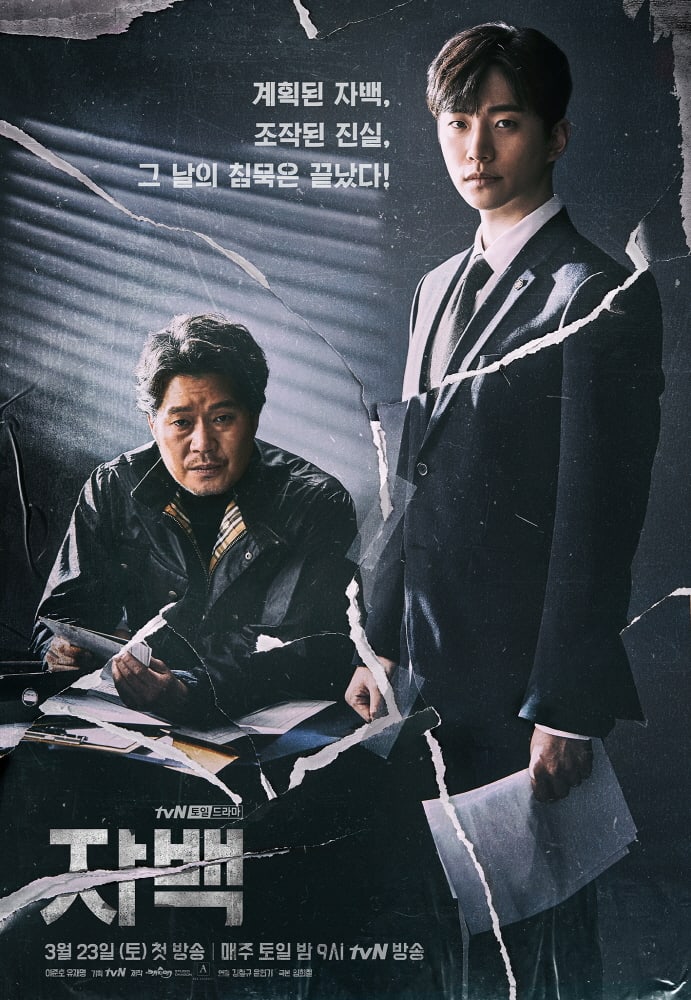 The producers of “Confession” commented, “The main poster’s concept is ‘to discover the truth by fitting together the pieces of fabricated [evidence].’ Through the image and texture of roughly torn pieces [of paper] that have been reattached, we wanted to convey the concept of searching for the true story behind an incident by pasting together fabricated truths.”

“Confession” will premiere on March 23 at 9 p.m. KST. In the meantime, check out the latest teasers for the drama here!