Daehyun’s agency has given a statement to clear up the uncertainty about the crowdfunding project for his comeback and the prices of his concert tickets.

The B.A.P member is currently using crowdfunding platform Culture Bridge to gather funds for his mini album project. The project opened on March 5 with the goal of raising 30 million won (approximately $26,600). The project reached its goal on the first day, and as of March 7 at 2:30 p.m., it has gathered 59.1 million won (approximately $52,300), which is almost two times the original goal.

The amount fans can pay is divided into six levels, with the lowest amount at 15,000 won (approximately $13) and the highest amount at 500,000 won (approximately $444). Each level has benefits including a mini album, photo card, photo book, handwritten postcard, birthday party invitation, backstage passes, and an “invitation to his mini album release concert,” depending on the amount paid.

The “invitation to his mini album release concert” is a benefit only given to those who donate 500,000 won. As the ticketing system for the concert had not been announced, there was confusion as some believed that the only way to attend his first solo concert was to donate the 500,000 won. Fans began to voice their complaints as they believed the price to meet Daehyun in person through the birthday party invitation, backstage passes, and “concert invitation” was too expensive. 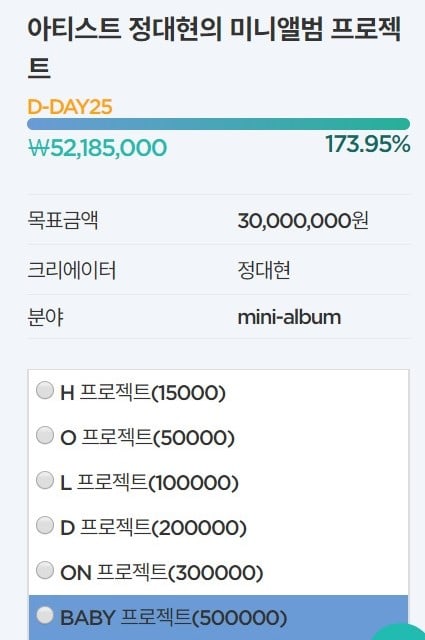 On March 7, a source from his agency stated, “The concert for the release of his solo album is separate from the funding. It is not true that only those who participate in the funding are able to attend the concert. We are currently in the middle of discussing the plans for the concert. We were planning on announcing the methods to purchase additional tickets after wrapping up the discussion.”

According to the source, those who received the “invitation” by funding 500,000 won were given the benefit of purchasing VIP tickets ahead of time. They further clarified that fans were not required to pay 500,000 won to attend the concert.

The source explained, “Since we are a one-man agency, the production costs are mostly being covered by the funding. In objective comparison to other crowdfunding projects, we think that we are able to give fans many benefits.” They continued, “We fully realize that the confusion arose because the details had not been completely announced. We apologize to fans and will take care to pay more careful attention in the future.”

Daehyun’s album is set to be released in April.