On the March 7 broadcast of KBS 2TV’s “Happy Together,” the cast of “My Only One,” including Jung Jae Sun, Im Ye Jin, Cha Hwa Yun, Lee Hye Sook, Uee, Na Hye Mi, and Park Sung Hoon, appeared as guests.

When asked about her husband Eric’s reactions to her romantic scene with Park Sung Hoon, Na Hye Mi replied, “He’s pretty understanding since we have the same job, and we occasionally watch our dramas together.”

She continued, “I was watching an episode with him, and there was the scene where I kissed Go Rae (played by Park Sung Hoon). While watching, he paused it and said, ‘I’m only going to watch it to here.’ When we’re watching it in real time, he can’t pause it and he has to watch with me. When that’s the case, he quietly says afterward, ‘You little punk.'”

MC Yoo Jae Suk commented, “I feel like it’d be upsetting if he didn’t get jealous,” and the actress replied, “I think I would be if he didn’t say anything.” About Eric’s romantic scenes, Na Hye Mi said, “I think his thoughts are important, if it’s a good drama that he really wants to do. But, I don’t think I’ll be able to watch one of his intimate scenes with him.” 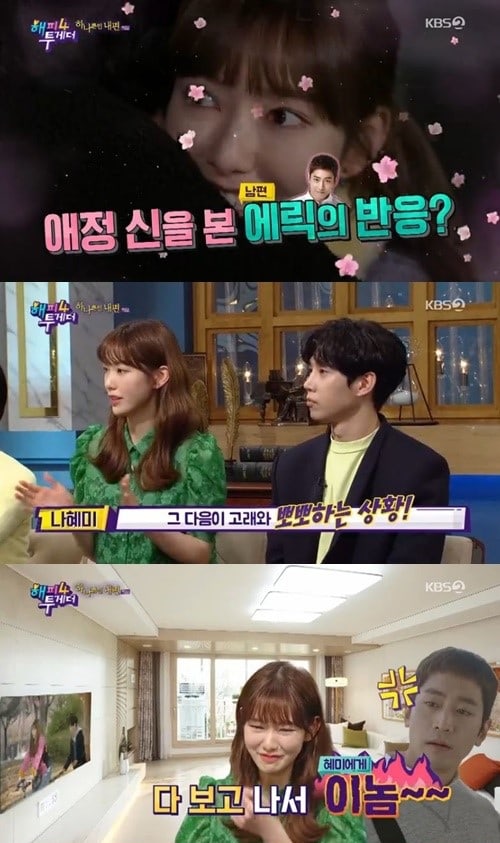 “Happy Together” airs on Thursdays at 11 p.m. KST. Watch below:

If you haven’t yet, start watching “My Only One” now!

Eric
Happy Together
Na Hye Mi
Shinhwa
How does this article make you feel?