As BTS’ Suga rang in his 26th birthday, ARMY celebrated the occasion by taking over Twitter with an outpouring of love for the singer and producer!

As of 1:43 a.m. KST, six of the top nine worldwide trends on Twitter were dedicated to Suga. The social media platform’s highest-trending topics included #OurFirstLoveYoongi, #HAPPYSUGADAY, MIn Yoongi, #WhatAReliefYoongiWasBorn, #SOPE, and a hashtag in Korean that references a lyric from BTS’s “Fire“: “Yoongi, live your life however you want; it’s all yours anyway.” 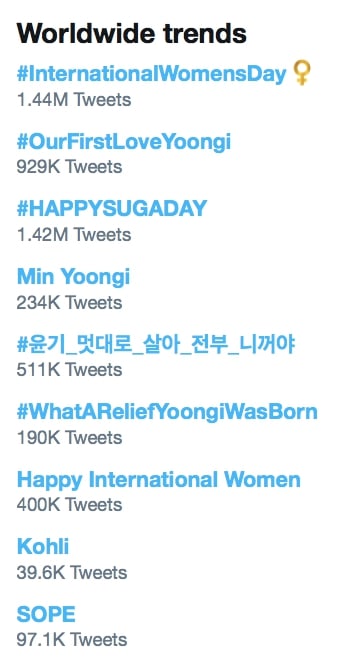 Suga responded to his fans’ birthday wishes by sharing an affectionate message of gratitude on Twitter. In addition to posting a couple of selfies, the BTS member wrote, “Thank you, ARMY! I will work hard this year as well!! I love you.”

Several BTS members have also already posted their own celebratory messages on Twitter. J-Hope shared several behind-the-scenes photos of himself and Suga, writing, “Happy Birthday, hyung.” He then added the hashtag “SOPE World.”

J-Hope also posted a screenshot of his birthday text message conversation with Suga—after J-Hope wished him a happy birthday at 12 AM sharp, Suga replied, “Thanks!”

Jin shared a photo of himself posing with Suga, as well as a screenshot of his own text message conversation with his bandmate. Jin wrote, “Happy Birthday. Okay?” Suga replied, “TY [Thank You].”

Check out some of the many loving tweets that ARMY posted for Suga’s birthday below!

the nations most talented man was born today, happy birthday to this bby boy ? thank you for everything you’ve done for us & bts ?
#OurFirstLoveYoongi
#WhatAReliefYoongiWasBorn
#HAPPYSUGADAY pic.twitter.com/GUoM5oQc0f

happy birthday to one of the most humble and hardworking person i’ve ever come across. without you, army wouldn’t be army and bts wouldn’t be bts. you mean SO much more than you think, i promise yoon. i hope your day is filled with nothing but love and hugs!?#OurFirstLoveYoongi pic.twitter.com/re4WDwUJpm

“I can be
Suga of BTS
Agust D
Or Yunki Min.

I am whatever you say I am
I always break down your definition
Always
Surpass your expectation”
by @dtownsonic_suga#OurFirstLoveYoongi #HappySugaDay pic.twitter.com/eGkBsIIWDz

so I’m about to get real sappy but I want to say a happy birthday to my whole heart Yoongi. His bravery and his passion have saved me in more ways than one. #GlowingMinPDay #OurFirstLoveYoongi #HappyMinSugaDay #Happy민슈가Day #WhatAReliefYoongiWasBorn pic.twitter.com/D3tlqdo2np

Happy Birthday Yoongi!! I wish you the best in your life. Always eat a lot, sleep as much as you can and be happy. I hope we will see this beautiful smile forever and always~! We love you! Remember that. ??사랑해#HappySugaDay ??? pic.twitter.com/8WuqUCvhgI