Kim Jong Kook found himself in a pickle on SBS’s “Running Man”!

On the March 10 episode of the variety show, the cast competed in a special race with the theme of a “Mystery [Freshman] Orientation,” where they had to figure out the identity of a secret “returning student” amongst them who was out to sabotage the others.

Trot singer Hong Jin Young appeared as a guest on the show, where she spoke about her new studio album “Lots of Love.” Hong Jin Young said, “It’s been 13 years since I debuted, but this is my first time releasing a full-length album.”

Yoo Jae Suk commented, “I remember when you appeared as Anna on a program called ‘Cider’ [literal translation] in the past,” and the singer replied, “My face has changed a lot, but that Anna is me.”

Later on in the show, Kim Jong Kook, Hong Jin Young, and Song Ji Hyo all ended up on the same team during a game of “gym ball soccer.”

Seeing the trio together, Yoo Jae Suk remarked, “This team is a bit funny. Both of them have a connection to Kim Jong Kook,” and Yang Se Chan made everyone laugh by saying, “Hey. Let’s be quiet.” 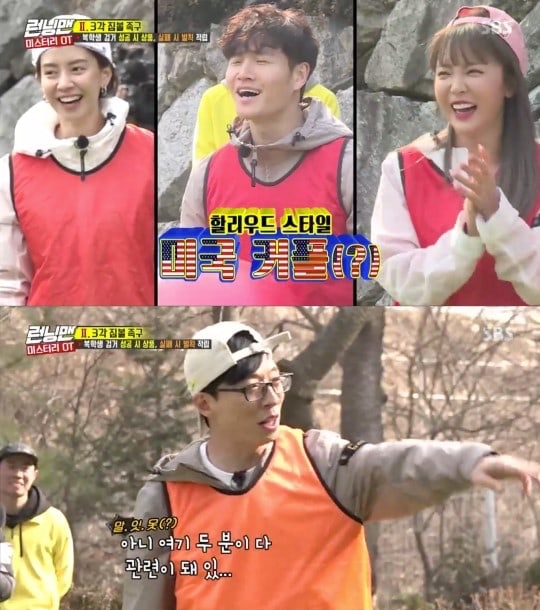 Because Kim Jong Kook currently has a love line with Hong Jin Young on “My Ugly Duckling” and one with Song Ji Hyo on “Running Man,” the cast became curious about whom he’d choose as a partner during this episode.

The staff then told the members to pair off as couples for the final mission, instructing them to avoid people that might be the mysterious “returning student.” Based on the information they’d gathered during the episode, the male members all wanted to team up with Hong Jin Young or Song Ji Hyo, who were both unlikely to be the “returning student.”

Song Ji Hyo accepted by taking his hand and saying, “Let’s go, honey.” Seeing them together, Hong Jin Young commented, “The two of you look so good together.” 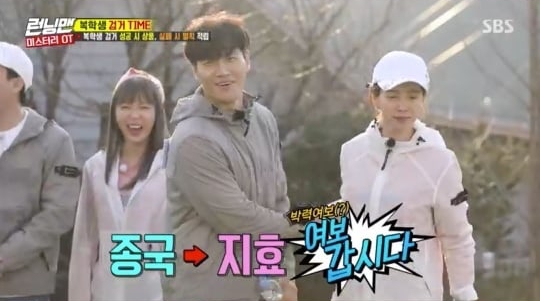 Check out the full episode of “Running Man” below!