On the March 10 broadcast, the singers reunited on the variety show. Lee Hong Ki previously appeared as a mentor on “Produce 48” while Miyawaki Sakura competed on the show as a contestant.

The IZ*ONE member said that it was really cool to see him again as a guest on “Everyone’s Kitchen,” and Lee Hong Ki added, “I was so proud when IZ*ONE first debuted.”

When asked if he thought that Miyawaki Sakura would debut as a final member of IZ*ONE, Lee Hong Ki replied, “I said this to the other teachers too, but I said that there is a reason why she is a popular idol in Japan and that she is probably different on stage. Since she has experience, I said that she has stage presence and mesmerizes people on stage. That is a skill and not something you can gain from practice.”

After cooking, the cast and guests gathered around the table to eat the dishes they cooked for each other. Speaking about his hobbies, Lee Hong Ki said, “I have so many. Bowling, skiing, mobile, and online computer games.”

Miyawaki Sakura then also shared, “My hobby is playing computer games. I [enjoy playing] Battleground.” When the cast asked if she wears a headset while playing, the idol pretended to play the game at the table and made everyone laugh. Miyawaki Sakura’s love for games is well-known amongst her fans, and the idol showcases her skills on her gaming channel on YouTube.

When asked about the longest time she played the game, Miyawaki Sakura answered, “About 10 hours, but it doesn’t feel like 10 hours. I look at my phone and think, ‘Woah. 10 hours?'” Other members raised concern that her back might hurt, but the idol replied, “No, I have a gaming chair.”

Kang Ho Dong asked if she killed many people, and Miyawaki Sakura said yes while posing with an imaginary gun. “It’s so fun!” said the idol with a big smile. 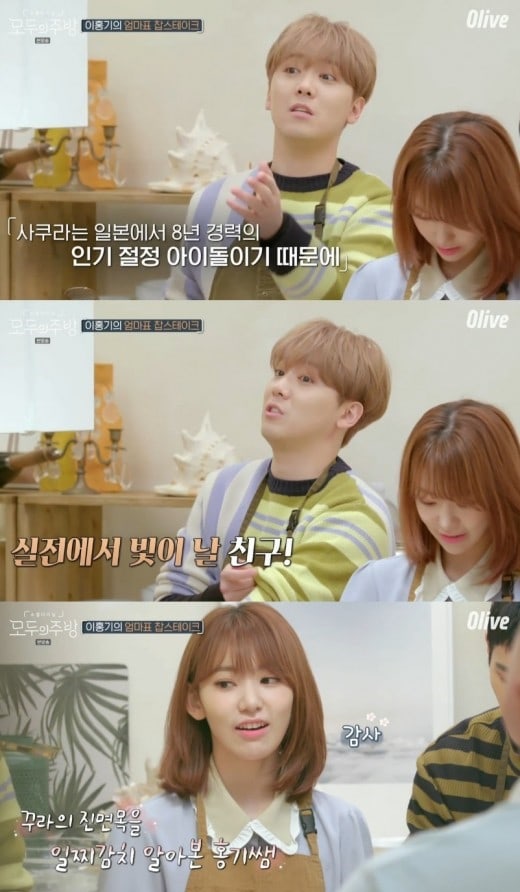