The SBS funE reporter has released more text messages, the new ones dated at 8:42 p.m. KST on January 9, 2016. The person involved was Mr. Kim, who is an acquaintance of Seungri who was helping Seungri with his restaurant business, and he also worked at Club Arena, which the police issued a search warrant for. On January 9, 2016, Mr. Kim posted a video and photos of a man and woman engaging in sexual intercourse.

According to the text messages, Seungri responded to the initial video by asking, “Who’s that?” before recognizing the man in the video and identifying him by name. The man in question was in the chatroom. In the video, the woman appeared to be intoxicated and unaware that she was being filmed. Mr. Kim then went on to post three photos of the woman that were secretly taken. The man in the video didn’t appear to be phased by the video and photos being shared, laughing it off. It appears that the man was aware he was being filmed. Mr. Kim was the one who set up the cameras, but this has not been confirmed. 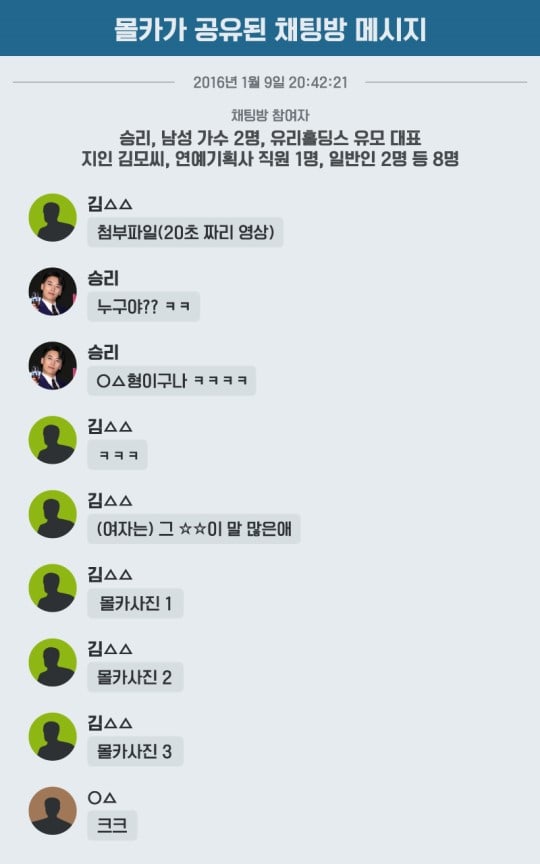 According to SBS funE’s reporting, a total of eight people were in the chatroom, Seungri, two male singers, CEO Yoo of Yoori Holdings, acquaintance Mr. Kim, one entertainment agency employee, and two regular citizens. All eight people saw the video and photos that were posted, but nobody spoke up about the potential problems with the situation.

SBS funE reported that the police has secured other text messages that show similar acts of spreading hidden camera footage. A source from the investigation stated, “Most of the women who were being filmed were not aware they were being filmed.” Other hidden videos were most likely shared within the chatroom as well. According to laws regarding sexual violence crimes, filming or sharing hidden camera footage is subject to five years or less in prison or 30 million won (approximately $26,500) in fines.

Additional investigation seems to be inevitable as allegations of hidden camera footage have surfaced on top of allegations that sexual escort services were sought. The investigation team is currently in possession of all the chatroom text messages, and the people in the chatroom, including Seungri and the other male celebrities, will be called in for additional questioning.