SBS’s Friday-Saturday drama “The Fiery Priest” has been impressing viewers with its unique characters, the synergy between its talented actors, and its refreshing plot that manages to be both serious and comic at the same time. Viewership ratings for the drama have been continuously rising since its strong premiere last month.

The perfect chemistry between Kim Nam Gil, Kim Sung Kyun, and Honey Lee has become a hot topic among viewers. Kim Nam Gil plays Kim Hae Il, a former National Intelligence Service agent-turned-Catholic priest with anger management issues. Kim Sung Kyun plays cowardly detective Goo Dae Young, and Honey Lee has taken on the role of the ambitious prosecutor Park Kyung Sun. While the characters are charismatic even by themselves, the three actors together have shown off a strong chemistry that has left viewers hooked on the drama. 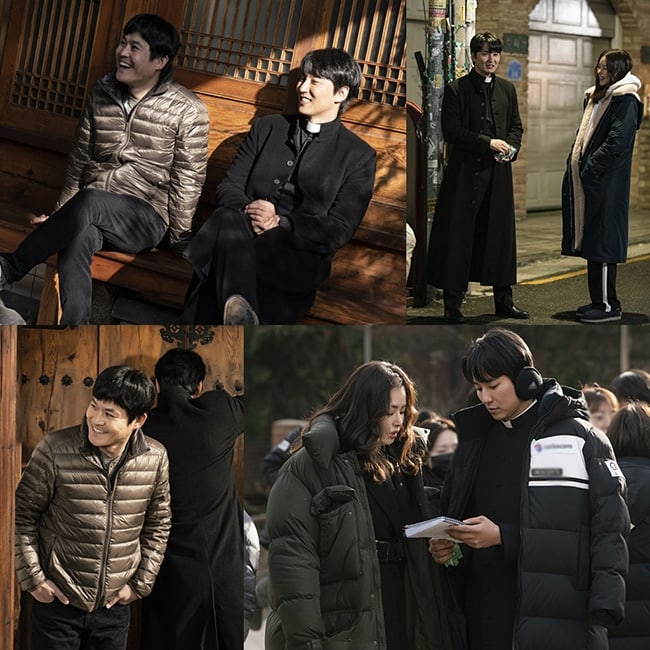 The new behind-the-scenes photos released by the production staff reveal the secret to the actors’ great teamwork on set. Kim Nam Gil and Kim Sung Kyun give off a positive, friendly vibe during rehearsal, while Kim Nam Gil and Honey Lee comfortably chat with one another and look at a script together while taking a break from filming.

On his chemistry with the other actors, Kim Sung Kyun remarked, “Kim Nam Gil responds well [to what I do], and we’re both just going at it. In addition to that, the director films us well.” He added, “They’re all truly great actors and truly good people.”

Kim Nam Gil and Honey Lee also showed off their adorable chemistry on set. The two stars previously worked together in the drama “Shark,” and their teamwork has only gotten stronger since.

Honey Lee commented, “[Kim Nam Gil] worried together with me about how I should act out my character, and he’s very considerate.” Meanwhile, Kim Nam Gil shared, “I feel energized when working with [Honey Lee] because she’s an actress with overflowing energy. Her ability to brighten the mood [on set] is amazing.”

The production staff also remarked, “Kim Nam Gil, Kim Sung Kyun, and Honey Lee actually talk a lot with one another about their scenes and their characters whenever they have time. Because of these passionate actors, the mood on the set is so great that we never stop laughing. We’re filming with the strength that we gain from our viewers’ support. Please keep showing [‘The Fiery Priest’] lots of love and interest.”

“The Fiery Priest” airs every Friday and Saturday at 10 p.m. KST. Watch the latest episode below!